Well Fan Expo has wrapped up for another year, and I like most of you are tired and beat up from the weekend.  It was long.  It was hard work.  But it was a lot of fun.

I think this year’s Fan Expo went very well, but there were some obvious problems.  The one that looms over the head of Fan Expo was the people waiting in line that couldn’t get in once Saturday was sold out.  It is a shame that everyone who would like to go, can’t get in, but the facility can only hold so many people.  The only way to remedy this problem is to have it at a larger venue than the Metro Toronto Convention Center (or use both the North and South buildings), but the MTCC is a good, central location that is easy to get to and it is a good facility. 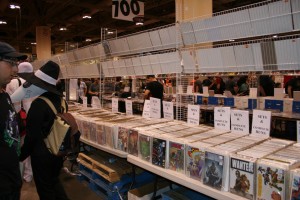 My other complaint about Fan Expo this year was the layout of the show floor.  I know some people like the layout this year, but I felt some areas were very open and clear, but other areas like artist alley were very congested and hard to move around.  There were several times I was looking for a certain artist but I couldn’t find them.  Only to find out later that I walked by them 4 times.  I even looked at the artist alley layout chart, and couldn’t quite make out where everybody was supposed to be.  In the end I found all the artists I was looking for, but that was on Sunday when the crowds died down, and it was easier to navigate artist alley. 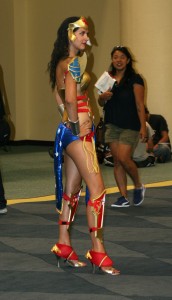 This is my final complaint about the show, I promise.  It was frustrating being in line waiting for a panel.  I understand we need to wait in lines.  I accept that.  But on the 700 floor, where the panels were being held, you would be waiting in line and somebody would be sitting on the floor taking a rest, and they weren’t there for the panel.  It was just the place they wanted to hang out.  In this case, if I was the volunteer helping in that area, I would ask that the people who were not waiting for a panel move to another section to relax.  The MTCC is a big facility, and I think for safety reasons they can find somewhere else to hang out and have a rest from all the Fan Expo action.  It’s a safety issue for me because the panel attendees had to try to avoid from tripping over, or stepping on people sitting on the floor. 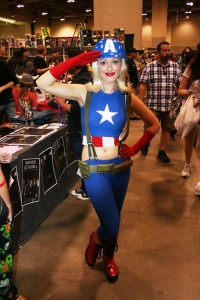 Ok… that’s all I have to complain about.  It’s not much and those things are hard to predict or remedy when you consider the amount of people who want to come to Fan Expo every year.

So now on to the good stuff.

Saturday of Fan Expo was a new experience for me.  Not only was I there, observing the show for Comic Book Daily, but I thought I would help out Big B Comics at their booth.  This was fun experience for me.  And I apologize to any of our readers who came by, and asked me a question about the inventory, only to have me stare at them blankly like a deer about to be creamed on the Trans Canada Highway.  I had no idea what inventory Big B had available, but I tried my best to help everybody out.  And I loved doing it.  I had a blast.

It was fun for me because I got to hang out with a bunch of the CBD gang.  Walt and Marc were there from Big B (of course) and Scott and Anthony were behind the booth as well.  I interact with them all the time through CBD and our regular correspondence, but actually getting to see people face to face is more fun.

Speaking about meeting people in person, I finally got to meet CBD’s own Leigh Hart.  I enjoy reading her stuff and she is just a very cool person… who will punch you in the face if you are not careful (just kidding Leigh).

The Big B booth was a great place to hang out on Saturday of Fan Expo.  It was main lane for traffic, so I got to see a lot of costumes walking by; it was just a blast.  I hope Marc and Walt will have me back next year to help out again.

On Sunday I dedicated my time to walking around and observing the show.  After talking to a couple of artists and toy vendors, some said sales were down.  One vendor told me his sales were lower than expected on Saturday.  It may be the location he had, or it may have to do with the economy and people are not spending their money.  I talked to another vendor who made crafts and their sales were great.  But I guess it is all relative to what you are selling.

One of the highlights for me on Sunday was getting to see Stan Lee.  I didn’t meet him, but my wife and I went over to the corner where Stan was set up.  If you stood by the wall you could see him.  Some people started taking his picture and they were allowed as long as you didn’t use the flash.  We stood there trying to get a good shot of Stan, and this lady pushed past me and was escorted to the front of the line to meet Stan.  She turned her head as she walked and I said to my wife “I think that’s Gillian Anderson”.  After she met with Stan, she was escorted back through the line and out.  She walked right past me again when an official looking person said to Gillian he needed to speak to her.  I couldn’t believe it.  It was Gillian Anderson and she was literally shoulder to shoulder with me.  I thought it was cool that she wanted to meet Stan Lee and I was lucky to be standing there at the time to see it happen.

The other highlight of the afternoon was the Marvel Booth Give-Away.  Arune Singh (Marvel Director of Communications), Steve Wacker (Spider-Man Editor) and Nick Lowe (X-Men Editor) were on stage giving every thing away.  They were giving out T shirts, comics, toys, prints and even a couple of books signed by Stan “The Man” Lee himself.

It was great to see people getting excited, but it wasn’t just excitement to get free stuff.  You could tell that everybody there was a comic book fan and love the characters.

Arune, Steve and Nick had fun on stage playing around with each other and the crowd.  I think this is something Fan Expo needs more of.  We need the companies to show the fans that they appreciate us.  It would’ve been nice to see DC do something like Marvel.  I think the give-away worked and it drew a lot of attention towards the Marvel booth. 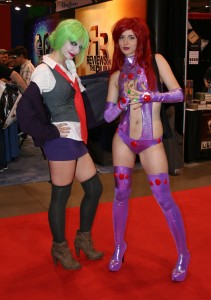 I think Fan Expo did really well this year.  Like every year there are a couple of things that need to be tweaked and worked on.  There are some things I preferred with Fan Expo 2011, but 2012 was a good show too.  Who knows what we’ll see with Fan Expo 2013.