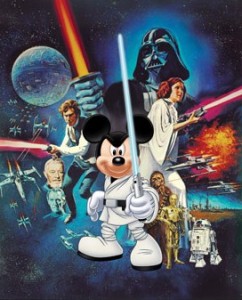 I don’t know about your Twitter, but mine had a Nerd-Gasm on Tuesday.

In case you haven’t heard (like you were off planet or something), Disney bought Lucasfilm, LucasArts, Industrial Light and Magic, and Skywalker Sound from now multi-billionaire George Lucas.

I have heard different reactions to this news.  Some positive.  Some negative.

Some of the negative reactions I’ve heard include saying that Disney is buying up all the major pop culture icons (ie: Marvel characters and now Star Wars).  I have also read that some people fear, instead of getting new movies, we will get remakes of the stories/films that have already been released.

Disney buying the Lucas empire is great news.  Over the last couple of years the Star Wars property has been getting stale.  The focus had shifted to the Clone Wars.  Growing up with Star Wars, the Clone Wars was only an event that was mentioned.  I think there has been too much focus on it, as a story.

Disney has a proven track record that they know how to handle intellectual properties properly.  There have only been small changes to the Marvel Comics Group, and I think the Marvel brand is stronger now with Disney’s wealth and influence.  Disney also owns the Muppets and I think they are on their way to being as popular now, as when they were in their hay-day in the late 70’s and early 80’s.

We’ve been told that we can expect a new Star Wars movie (Episode VII) in 2015.  I think that is the biggest news for us Star Wars fans.  We know Disney is going to sell merchandise for Star Wars.  But giving us a new movie, this is what we have been waiting for since 1983.  In case you are too young, there were many rumours in the mid 80’s about another trilogy of Star Wars movies.  As a kid I used to day dream on what those stories could be.  Then in the 90’s, it became a reality.  We were getting another trilogy… a prequel trilogy… W… T… F…

Now don’t get me wrong.  I enjoyed the prequel trilogy.  To quote Popeye… they is what they is.  But that is not the movie the kids wanted back in the 80’s.  The prequel trilogy became a new set of movies, for another generation of fans.  Our kids. 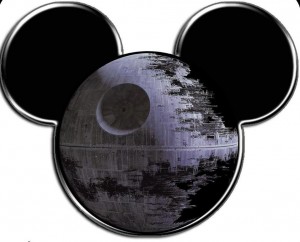 Star Wars Episode VII is coming at the right time.  All of us 80’s kids will rush out to see it, as well as our kids.  We need another Star Wars trilogy.  We always have.  The Star Wars universe is big enough that it needs to be explored more.  There could be 20 more Star Wars movies, and I would be happy as well.

I think the transition will be gradual for Disney taking over Lucasfilm.  I don’t think you’ll see Princess Leia tomorrow at Cinderella’s castle at Disney World.  But over the next couple of years we will see Star Wars merchandise showing up at Disney owned retail outlets.  We didn’t see Marvel show up at Disney Stores over night.  It took some time.  But Marvel stuff is on the shelves there right now.

The forgotten property in transaction is Indiana Jones.  Everybody is focusing on Star Wars, there hasn’t been much talk about our favourite whip-weilding archaeologist.  I hope this means a brighter future for Indy as well.  It looks like a deal would have to be made between Disney and Paramount Pictures, since Paramount has the rights to the Indiana Jones feature films.  But I think they get along well, because of a little movie called The Avengers.  They could come to an agreement for that movie, I think they can come to an agreement for Indy 5.

This is only the beginning of a new future for Star Wars (and Indiana Jones).  Over the next several months, we will start hearing about Disney’s plans for the future of the property.  I know I am excited, and it may be the first time I’ve been excited for Star Wars since 2007 when Episode III came out.