As you know I am a huge collector of action figures.  My collection is pretty extensive when you take into consideration all of my G.I. Joe, Marvel Universe/Select/Legends, DC Figures and any other cool stuff that catches my fancy.

Recently I stopped at my local Action Figure/Board Game store and looked for anything new that has come out lately.  I struck up a conversation with the sales associate about action figures and the like.  One of the figures we started talking about was the recently released NECA Predator Dutch figure (Arnold Schwarzenegger).  There are two versions of the figure, and I own one of them.  Now I am debating picking up the other version of the figure.  The sales associate asked me why I would buy the other version of the figure, I replied “why would they come out with two of them, if they didn’t expect you to buy both?” 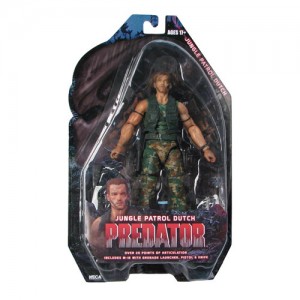 We talked about my collection and then she told me about hers.  She collects statues.  There are several that she owns that cost around $300.  For me, that is too much for my collection.  I have bought complete action figure collections for less than $300.

She then explained to me that there is a huge difference between statues and action figures.

Statues can hold their value, and actual increase in value after they are released.  There are a bunch of factors that contribute to this. Statues are sculpted by artists, and some artists are highly sought after.  If they retire, or die, this can make their work more valuable.

Statues are created in limited production numbers as well.  Action figures could be produced in the 10’s of thousands. But statues are made in very low numbers, and after they are created the moulds are destroyed, which prevents any future pieces to be made.

Quality of the product is another factor for the increased value of a statue.  Statues are typically made from higher quality material, with more detail put into the sculpting.  Action figures are made to be very affordable, and in many cases the quality of the sculpt and material is sacrificed to make a cheap product.

The final reason she gave to me on why statues are valuable is display.  Statues are meant to be on display in your collection.  They are easier to clean.  Also in many cases the certificate of authenticity is posted on the bottom of the statue, so there is less paperwork to lose.  As long as you have the original packaging, you will have a valuable property on your hands.

If you take an action figure out of it’s packaging, the value of the figure drops.  If you keep it in the package, but the package itself shows age or damage, you lose value there too.

I never thought of this before when it came to statues.  I always avoided them because I didn’t have the space to display them, and couldn’t see the value in the price when they are sitting on the retail shelf.  Now knowing what I know, I may pick up a statue for my collection in the future.