I am fascinated by voice acting.  It was a career I was interested in pursuing but I never got past that point.  This panel was one that I wanted to catch, because I have a great deal of respect for Wally Burr.  I have seen interviews with him before on the special features of several of my Sunbow Animation DVD’s and I wanted to hear him speak in person. 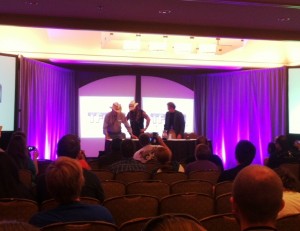 The panel started with video clips featuring the voice work of Scott McNeil and Neil Ross.  Scott McNeil entered the panel room first, then introduced Neil Ross.  Neil Ross then introduced Wally Burr, who entered the room wearing a beat up cowboy hat.  Scott McNeil is known for wearing a cowboy hat and told Wally Burr he was infringing on his trademark.  The two started swatting each other with their hats, then wrestled each other to the ground.  Neil Ross grabbed the microphone and started the play-by-play of the fight.  Then Neil Ross was dragged into the fight and emerged the victor.  The humour continued when they said it was supposed to be a panel, but became a Brett Michaels look-alike contest.

From that point, I knew this was going to be an interesting panel.  They panelists broke the ice with the crowd, and things got under way.

Wally Burr stood up in front of the crowd and held two printout sheets.  He said both were the credits of the two voice actors on stage.  Each credit sheet unfolded to the ground.  Wally then explained that Scott McNeil and Neil Ross are well-respected actors, who have worked on many projects and have many credits to their names.

The panelists took the opportunity to introduce themselves and explain a little bit of their backgrounds.  Scott McNeil was first to do the introductions.  He started off taking theatre classes, but he always had a knack for doing voices and impressions.  One of his early idols was Paul Frees , who is a legendary voice actor.  Scott started doing commercials, and then a director found out he could do different voices and told him he should try working in cartoons.  He has been a voice actor ever since.

Neil Ross did voices as a child.  He had the ability to copy accents and do impressions.  He was told many times that there was no future in “doing voices”.  His first job doing voice over work was as a radio disc jockey.  Doing different voices and characters was not very popular with his radio station at the time.  He left there, found a talent agent, and got into the cartoon business.

Wally Burr was a voice director for many years, and he had worked with many legends including Paul Frees and Harvey Korman.  He started as an announcer in Chicago.  He worked for Hanna Barbara as a voice director.  He directed commercials but found his talent was better for animation.

The cartoon and voice acting business has changed a lot over the years.  Originally the voice actor would be in the studio, while the director and engineer would be in the booth on the other side of the studio glass.  The actor could see the director, and vice versa.  Now technology allows for the voice actor to be in another location, while the director is in their office or studio recording the session.  This style of recording has its benefits and also its hinderences.  One benefit is conflict resolution.  Without being face to face the actor or director only communicate by audio, so there isn’t the physical interaction which could cause more problems or disputes.  One of the negatives is the voice director can offer suggestions on how the actor reacts physically to the script.  The vocal performance will change with the movements of the actor.  Sometimes there will be a better performance, if the actor can move or stand in a certain way.

The floor was then open for questions for the panelists.

The question of ad-libbing or improvising a script came up.  Wally Burr said that improvisation all depends on the voice director and the cast.  If they can all work together well and have good chemistry, good things will come from improvisation.  But many times it will depend on the writers.  Some writers are not open to improvisation.  They would prefer that the final product resemble their original script.  Other writers are open to new ideas that come from the synergy of a good cast.

Wally Burr then gave some tips to be a successful voice actor.  One of the keys to a great performance is preparation.  Wally Burr said that as a voice actor you have to learn to read ahead in the script.  Instead of reading the script robotically, you need to anticipate the feeling and emotion of the material being read.

Practice is important as well.  You need confidence to be a good voice actor.  You also need to be comfortable with your voice (or many of them) to succeed.  Wally Burr suggested getting a voice recorder and recording your voice, and play it back to critique your performance.  Wally said that if you listen to yourself, you’ll be able to tell if you are good or not.  You can also judge your pacing and tempo of your performance.  Just reading the newspaper into a recorder is good practice on voice acting.

Neil Ross said that workshops and coaching are a great way to hone up on your voice acting skills.  Another tip he had, was to dig the thought and reflection out of the script.  Get to understand what the character is saying and portray that through your voice.  Neil Ross also said one of the most important things to have in the business is an agent.  They won’t find you the work, but they can find the opportunities, that you can you can then turn into a career.

And the final point that all the panelists agreed on was experience.  Get as much experience as you can.  Even announcing the “blue light” specials at the local department store is still experience for voice acting and announcing.  It takes a lot of years and a lot of work, but the reward will be worth the time you put into it.

Check out my column later this week for an overview on TFCon and Canadian Collectible Toy Expo.