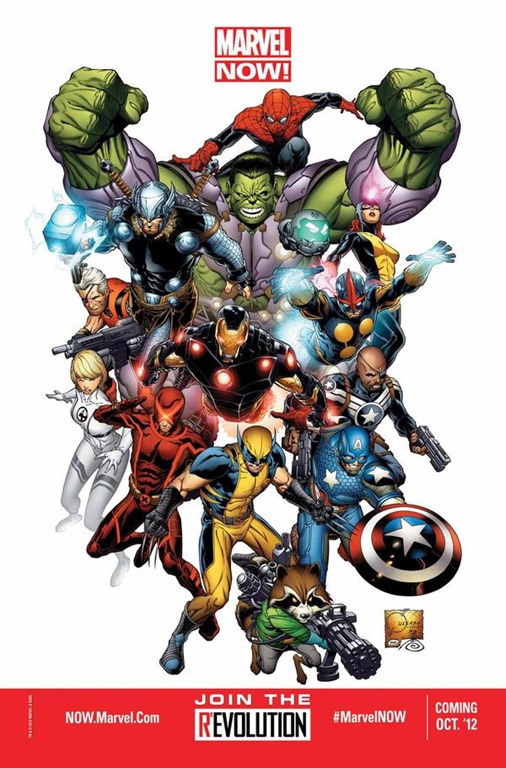 We all know that rebooting a series or creating a “new jumping on point” causes sales to increase, albeit in some cases temporarily, but I often wonder what this does to the sales of a title before the relaunch. Comic books are somewhat unique in that we are able to look into the future and see what will be coming out in a few months. This does have a potential negative effect of changing our purchasing pattens now because of a product being released later.

For example, I had been on the fence the last couple of months about Captain America, Thor, and Action Comics. They are written and drawn by excellent creative teams, but I feel that they are just okay. Not bad books, but not as great as they have been in the past. The announcement of Marvel Now! and Brubaker and Morrison leaving superhero books basically gave me another potential reason to drop the titles.

Comic book fans generally love to collect things; it is one of the reasons we got into the hobby in the first place, so believe you me it takes a lot for someone to drop a book. Thor is currently quite solid. I loved the shattered heroes story with Ulik and the Mares are a great new addition to Thor’s roster of villains, but the announcement of an 8 part crossover with Journey Into Mystery that results in the cancellation of the Thor title made up my mind for me and I dropped the book.

As I said earlier Captain America is a good title, but Brubaker is a great writer. I pick up both Cap and Winter Soldier but the latter is such a gem in the Marvel lineup (currently tied with Secret Avengers for the best they offer) that I found Captain America lacking. So I was on the fence and then Brubaker announces he is leaving Captain America (but thankfully staying on Winter Soldier) and once again my mind was made up and I’ve dropped the title.

Action Comics is fully the craziest flagship book DC has ever done. It takes place before the rest of the books so Grant Morrison gets to do whatever wacky stories he wants as long as it ends up looking like the current issue of JLA and Superman. It is weird, solidly written, but at times doesn’t really feel like Superman. Each issue makes me wonder if I should drop it but each is so guano-crazy that I decide to stay month after month, but that will end once Morrison is off the book.

The real issue is that companies want to keep stories a surprise for sales reasons but then need to blow the ending for stories to promote the next big thing. Flashpoint ended with the new 52 and Avengers Vs X-Men is going to end with the Uncanny Avengers. AVX is the current sales leader in comics books, but will sales drop now that readers know how it ends? From all reviews AVX isn’t a great story, so if you reveal the ending I feel that you’re going to lose some sales.

Now, I’m sure that Marvel and DC each have a team of statisticians working around the clock to determine the release schedule of books to ensure optimal sales, thus the increase in new sales for a new #1 must outweigh the loss of sales before the relaunch, but what about those readers who drop a title and then don’t pick up the new #1? Shenanigans have lost those readers.

The ever-relaunching nature of mainstream superhero books seems to be the norm but I feel that there must be a better way. I have a few ideas that I’ll share with you in another column. In the meantime, these were my musings.