If you are a regular reader of Comic Book Daily, you know that every Wednesday, a group of us get together at Blue Beetle Comics.  We pick up our comics, talk for a bit, then head out to get a bite to eat somewhere.  Our group has become to be known as “The Blue Beetle Diners Club”.  Most of the members of the group have been mentioned on CBD before.  There is Brent Chittenden, Ryan P, Tall Ryan, myself and sometimes Kevin S and Pete DeCourcy.  This group of friends have become some of my favourite humans to hang around with. 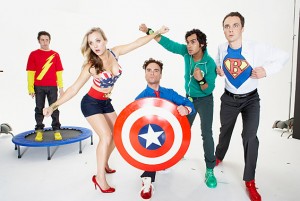 Last week I was talking to an acquaintance of mine, and I mentioned comic book Wednesdays.  He looked at me with a stunned look on his face, and then said “You collect comic books?”

“What type is that?” was my reply.

“Oh you know, you don’t look like Sheldon or Leonard.  You know those guys from Big Bang Theory.”

I started laughing.  I explained to him that I’ve been collecting and reading comics my entire life.  I also told him, you never know who reads comics because stereotypes are never true. (On a side note, at work, where this conversation happened, I have Captain America as my computer wallpaper and I’ve been known to wear a Mr. Fantastic or Superman t-shirt.  I would think that people could tell that I’m a comic book fan because I surround myself with comic culture items).

This leads into the age-old debate, is Big Bang Theory good for comics.

There is no doubt that Big Bang Theory is popular.  At the time of writing this article, it is the 3rd most watched TV show (excluding sports programs) and averages 14-17 million viewers per week.  On Facebook, BBT’s fan page has over 17 million likes.

I think Big Bang Theory is good for comics.  Sure, the show portrays Sheldon, Leonard, Howard and Raj as socially awkward comic book fans or nerds, which may offend some comic book aficionados.  It doesn’t offend me, I think it’s humourous.  I also like the fact that 17 million viewers get to hear people talking about comics or see a Batman cookie jar or see someone dressed up as the Flash.  It is exposure to the comic book world and culture. 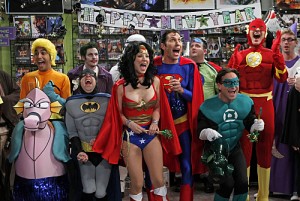 Big Bang Theory makes the comic book collecting hobby accessible to a larger fan base.  If even a couple of those viewers go into a comic book shop, and buy a comic, isn’t that good for the comic book industry?

Merchandising for Big Bang Theory is big business right now too.  BBT fans are buying t-shirts that the characters wear on TV.  They are also buying t-shirts based on the TV show itself.  In the latest Previews I saw that you could buy your very own “soft kitty” plushie.  And it looks like more Big Bang Theory products will be available in the future.  Recently I saw Bazinga t-shirts at Walmart.  So the products are not just available at your local comic shop or specialty store anymore.  Even the word “Bazinga” is working its way into our daily lives.  Who knew a tagline would be this popular (my favourite is still Happy Days’ “sit on it”) 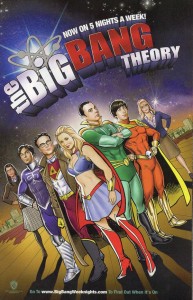