I’ve said it many times in my column before, we are collectors. It doesn’t matter if it’s comic books, action figures, trading cards or memorabilia we like to find stuff and collect it.

I’ve had this discussion before with people, what is more important “The Chase” or “The Grail”?  Or to put it in other words, is it more fun to track down your elusive item or is it more rewarding to have that item in your collection?

In case you are asking yourself what do we mean by “Grail”, it is in reference to The Holy Grail.  The Holy Grail is that one object that many searches and crusades have been launched to find that artifact (Scott adds: supposedly the cup Christ used at the last supper, and/or to collect his blood on the cross).  King Arthur, Indiana Jones and Monty Python have searched for the Holy Grail.  As comic book collectors, our crusade isn’t different than the search for the real Grail.

To each of us, our Grail is a different object.  You may be searching for Amazing Fantasy #15 or an Action Comics #1 (or it could be one of last week’s new 52 that wasn’t put in your box at the comic shop and is now sold out).  It doesn’t matter what it is, it is something you desire which now you will search out.

In one discussion I had about “Grail” collecting, someone brought up the issue that there was only one Holy Grail and only one person could wind up with it.  They also brought up the example of the G.I. Joe aircraft carrier, the U.S.S. Flagg.  They said it couldn’t be a Grail because there were many of them in production and it is easy to obtain it you are properly motivated.  I quickly dismissed this person.  I like using the Holy Grail as an example.  As a collector, you wouldn’t start on your quest unless it was important to you.  What could be more important than the Holy Grail?  Also putting that object on very high regard, makes the chase and reward more exciting.

Sometimes the object you are looking for, isn’t readily available.  If it was, it wouldn’t be a chase.  Sometimes your quest for your “Grail” could take months, years or dare I say decades.  There are several items I’ve been looking for have taken decades to find (but I’ll elaborate on that later).

Your chase can take you anywhere as well.  You could be searching through back issue bins at a comic shop, checking a dealers table at a toy show or come across what you’re looking for at a garage sale.  And don’t dismiss garage sales too quickly.  You never know what you will find there (often for a really cheap price… and sometimes in unbelievable condition).

For me, I enjoy having the “Grail”.  Most times I enjoy having my object, more than I enjoy the chase.  The chase can get frustrating at times.  Especially when you get very close to your object but lose it at the last second.  Sometimes I’ve been at a toy show and seen a specific G.I. Joe figure I wanted, but someone scooped it up before I could get my hands on it… or there have been times where I’ve had my Grail in my hands and sadly like Indiana Jones I’ve had to let it go because Henry (or my wife in those instances) has told me to let it go because the price was too high (not figuratively, I mean literally.  $28 for a G.I. Joe figure is insane).

But when your quest is long and arduous, the reward is ever so sweet.

Now you may be asking yourself, Ed, what are some of the “Grails” in your collection?  I am glad you asked, because I have some examples for you.

When I was a kid I would dream about getting the Flagg.  At the time I knew it would never happen.  It was just too expensive in those days.  Plus the sheer size of it didn’t help either. Interesting note about the Flagg.  The bridge section is removable so you could store it under your bed.

I eventually accepted the fact that I would never own a Flagg.  I rarely came across one while at garage sales or toy shows.

Several years ago I came across an ad on Kijiji where someone was selling his G.I. Joe collection.  I browsed the ad quickly because I find when people are selling their G.I. Joe collection, their price is high because they think it’s worth something.  In the list of items for sale, I saw the words I’ve always looked for… U.S.S. Flagg.  My jaw dropped.  I immediately responded to the ad and after talking back and forth for several days, we eventually came up with a price for a portion of his collection.  But included in that portion was the Flagg and the Cobra headquarters… The Terrordrome.

I finally had my Flagg.  There were a few pieces missing and the owner was a smoker, but that was easy to fix.  The Flagg has some age to it, but I don’t care.  I own a “bleeping” G.I. Joe Flagg.

I know what you may be thinking, the orignal Shipwreck figure was very popular in the mid 80’s, he should be easy to find.  Well… sort of.

I bought my Shipwreck in the summer of 1985.  At the time I was debating over two figures.  In one hand I had Snake Eyes.  In the other I had Shipwreck.  I was debating between both because they came with animals.  I ended up buying Shipwreck.

I didn’t have Shipwreck long.  I took him to school one day and he was taken out of my desk.  Since then I’ve been on the hunt for Shipwreck.

Over the past couple of years I have pick up 3 Shipwrecks, but they’ve been in poor condition and missing their weapons.  I did find one at a show, and it was in mint condition.  But I left it there because of the price (as I mentioned earlier).

This past weekend I was at a toy show.  I found a Shipwreck, with his weapons (alas… missing Polly), for $5.  I paid for it quickly then moved on to the next table.  When I got home I inspected it.  The paint is perfect and the joints are very tight.  The only flaw I can see on it is a small crack at one of the elbow joints.  I have an extra Polly (the parrot) from another Shipwreck I bought, that I will give my new Shipwreck.  So after searching for 27 years I have finally replaced my missing figure.  That doesn’t mean I’m going to quit buying Shipwreck.  I’m still going to keep buying him.  I have an aircraft carrier that needs a crew. 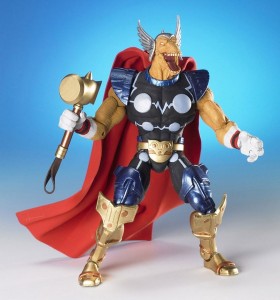 There isn’t much that I am desperately looking for right now, except for a Marvel Legends Beta Ray Bill.  I’ve been looking for it at different toy shows and expos I have been at.  I did find it online, but unfortunately the website turned out to be a fraud and I lost the money on the transaction (Paypal was awesome and refunded it).  I have found it on eBay at another retailer, but after getting stung on my first transaction I am leary on trying it again.  I know I’ll find it at a future show.  But like all chases for a Grail, it takes time and work but it pays off in the end.

Now I want to hear from you.  What is your “Holy Grail” in your collection?  Have you found it yet or are you still on your quest?  Let us know in the comments below.