I was sorting and arranging a pile of comic books in my basement, when it fell on top of me.  For the past several weeks I’ve been trapped in my basement, but luckily I remembered the Simpson’s episode from way back in Season 3, when the same thing happened to Seymour Skinner.  Using a ball point pen and simple chemicals within my reach I was able to fabricate a crude bottle rocket to save myself…

But I did take a couple of weeks off from writing for Comic Book Daily, to reflect on the past year.  I also unplugged from the “Matrix” as well.  I barely Twittered or Facebooked over the last couple of weeks as well.

I did come up with an observation when I was in my self imposed exile.  To quote the classic B.B. King song, the thrill is gone (maybe).

When it comes to collecting you need passion.  It doesn’t matter if it is comic books, action figures or trading cards, you need to be passionate about your hobby and your collection.  Right now my passion is dwindling.  Which may come as a surprise to the people who know me because I am upbeat and positive when it comes to my collection.

There are lots of factors that lead to this decline in “positive energy”.

It pains me to write this but right now my interest in G.I. Joe is falling.  Now don’t get me wrong, I would never sell my collection and give up my hobby.  It will never happen.  I’ve been collecting G.I. Joe for almost 30 years now.  It has been out on display or sitting in the corner of my bedroom waiting to be played with for almost 23 of those 30 years.  That’s right.  The whole time I’ve had my G.I. Joe collection, there has only been about 7 years that my toys have been packed away in containers in my closet.

But right now, what is there to be excited about?  Sure there is a movie coming out this summer (which the trailer is awesome).  There are new toys coming for the movie, but no official pictures have been released yet.  There are still 2 waves of 30th anniversary figures coming out, which I have both waves pre-ordered.  Unfortunately my cases haven’t shown up yet.  My friends have picked up several of the new Joes, but I’ve had to sit and watch them buy and get excited for these new figures and I have to wait.  It’s depressing.  It’s hard to get excited and eagerly wait for something when you have no idea when it is going to come. 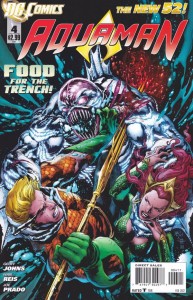 My passion for comics has died down a bit too.  I wasn’t too excited when the new 52 came out.  But I did end up getting into Aquaman, Batwoman, Sugergirl, Wonder Woman and Dark Knight.  At the beginning they were a great read, but after the last issues I may be a bit luke warm on Aquaman and Batwoman.

I feel the first story arc for Aquaman was wrapped up too quickly.  We get new adversaries introduced for Aquaman from the trench, then over the span of two pages Aquaman defeats them and we may never see these creatures again.  It just seemed anti-climactic.

Batwoman is a series I’ve been waiting for since it announcement in January 2011.  I couldn’t wait to get my hands on the book.  After reading it, I am not entirely happy with it either.  It feels like it is a book out of place, which makes sense since it was written before the new 52.  Batwoman reads like an old DC universe book that feels odd in the new 52 universe.  I hope the book will turn around with the next story arc by Amy Reeder.  I love J.H. Williams III’s artwork, but if the book came out when it was supposed to last February, I would be happy.  But now it just doesn’t feel right.

I have gone through these highs and lows when it comes to collecting.  Several years ago I was making custom G.I. Joe figures.  Over the span of 6 months I made 113 custom G.I. Joe figures: it was a real passion.  Much of my free time was used to think of new characters and how they’d look.  At that time there were lots of G.I. Joe at discount prices so I could buy lots of bits and pieces to make my creations.  But eventually I was just making custom figures to use up all my pieces.  It got to the point where I didn’t care about what I was doing.  Just doing it to get it done.

I still like most of the figures I made, but it got to the point where the thrill was gone.

I haven’t made any figures in a while.  Now that’s not saying I’ll never make any custom figures ever again.  I just won’t in the forseeable future.  I just need the inspiration back.

I know everybody goes through this at one time or another.  That’s why I took a couple of weeks to gather my thoughts and focus on everything.  I’ve thought a lot about my collection, my hobbies, my work life and leisure time.  I’m going to focus on the important things.  Think about the positive things.  Try not to dwell on the negatives and I am looking forward to a very good 2012.