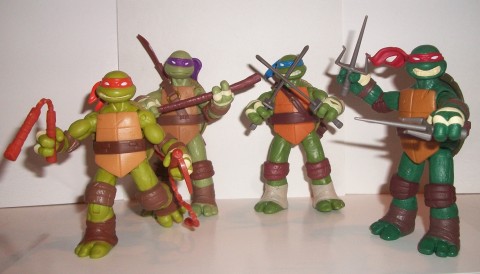 I’m talking about the Teenage Mutant Ninja Turtles… not the candy.  Because I love the candy… maybe a little bit too much. 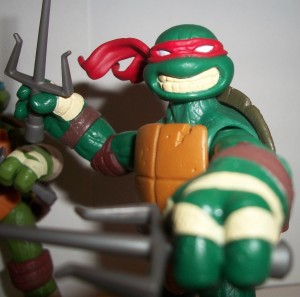 When the Ninja Turtles first busted onto the scene back in 1984, I was too young to enjoy them back then.  I never heard about them until the cartoon hit the airwaves in the late 80’s.

It wasn’t until after I saw the Turtles first feature film in 1989 that I became really interested in the Teenage Mutant Ninja Turtles.  But by that point I was just entering High School and back in the 1989/1990, a guy couldn’t admit that he watched cartoons and collected action figures.  It wasn’t cool then, like it is now.  So it was a secret I kept to myself (it’s great that nerd culture is more acceptable now).

I did buy two Ninja Turtle action figures.  The only Turtle that I had in my collection was Michelangelo.  He was my favourite.  The other figure I owned was Casey Jones.  He was a bad-ass character (even now when I see Elias Koteas on a TV show I yell Casey Jones at the TV screen). 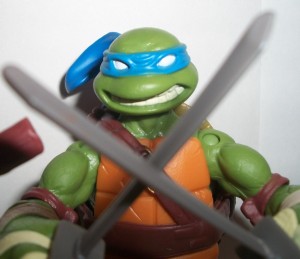 My son was interested in the Turtles for a short period of time when the TMNT animated movie came out.  I bought him the 3 live action movies on DVD as well.  He watched the Turtles constantly but eventually his interest waned as well.

Earlier this year I received an email from Anthony Falcone with a link to the news about new TMNT figures coming out.  At the time I told Anthony “I will probably pass (on these).  I like the turtles, but space and money are the two deciding factors.”

Several months ago the TMNT toys hit the shelf and I thought they look cool.  They look as good in package as they did in the original press releases.  But I passed on them.  I didn’t need them.

Until… I got my hands on Brent’s turtle figures. 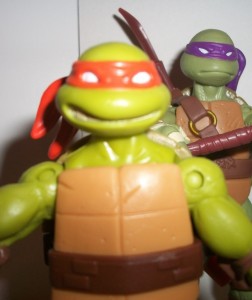 A couple of weeks ago I visited Brent when I was on my Rock n Roll road trip to Hamilton.  He had his turtle figures on display on his shelf and I picked one up to look at it.  I couldn’t believe the design of the figure.  It was awesome.  It is perfectly sculpted, in my opinion.  The part about the figure that changed my mind about buying the turtles figures, was the head.  The neck joint is a ball socket and that gives the head an extra range of motion.  It is a truly awesome figure.

And now I am hooked… and I blame Brent.

So this past weekend I rushed out to my local “Mart of Walls” and picked up a Michelangelo figure.  I figured since he was the only turtle I bought in the 90’s, he would be the first for my collection.  Then I saw the sculpt work on Donatello and I bought him too (which he is my new personal favourite with the new turtles toys). 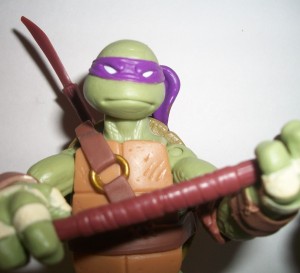 I took them out of their packages and gave them their accessories.  They are even cooler when you own them.  Two days later I broke down and scoured the shelves trying to find Raphael and Leonardo.  Leo was the hardest one to find.  The shelves were practically empty at my local stores.  There were lots of Foot Soldiers and Krangs left.  But I only want to buy the turtles.  I could only find 2 Leo’s left in the huge floor display.  One had a horrible paint job, so I chose the better of the pair to be the newest addition to my collection.

I don’t know if I am going to go all in with TMNT.  For now I foresee only buying these four figures, but I guess I did say before that I was going to pass on them all together.  I have heard good things about the cartoon, and Brent has told be the new TMNT comic series is a must-buy.

I guess the public is like me, they are getting back into Turtles.  But it makes sense.  All the toys from our childhoods are making a comeback.  Transformers, G.I. Joe, He-Man and Ghostbusters have come back.  Now the new “Retro-Recall” is the Turtles.  I hope C.O.P.S. is next.

How about you?  Do you love the Teenage Mutant Ninja Turtles?  Let me know in the comment space below. 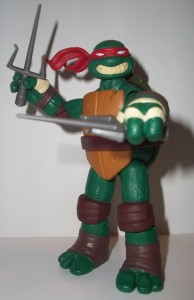 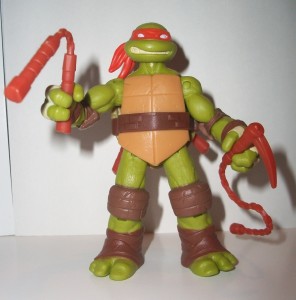 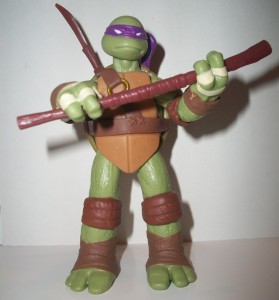 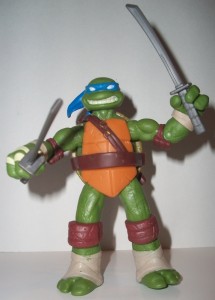