July 13th I attended the TFCon in Toronto. You can check out my previous column for all the fun stuff I did that day.

TFCon featured many panels and interactions with the special guests.  One of the panels I took interest in and attended was “Voice Acting 101”.  The panelists were: Garry Chalk, Gregg Berger, Neil Kaplan and via Skype – Susan Blu.  Susan Blu was unable to attend the convention due to a broken leg.  But Skype was perfect for her to join in on the conversation.

All four of the panelists worked as voice actors on Transformers during the franchise’s 30 year history.  During that time the animated series of the franchise has evolved and changed (or transformed) from its original conception.

The first tip they gave in the panel on Voice Acting 101 was to be playful and adaptable as a voice actor.  A voice actor can succeed by being able to change with every situation.  If a voice actor goes into an audition or a recording session with a preconceived notion of how the character will act or react to the situations presented, the actor will struggle in the creative process.  Voice actors who are “playful” or open to direction from the producers can give the production team the performance they are looking for, or even perhaps take the character and scene in a different direction that wasn’t scripted in the first place.  Sometimes writers and directors can get new ideas from the voice actors as they work within the scene, and change the tone or emotion of it.

The panel also mentioned that producers and directors know if an actor is right for the production within the first few minutes of meeting with the actor.  They can just get a sense or a feeling if the actor will work right for them.  Susan Blu is a successful voice director now, and she mentioned that if a potential voice actor is making a “demo tape” they should lead with their best material right from the start, and try to keep the tape to 2 minutes length maximum.  Susan Blu said if you wait until the end of the tape to finish with your best material, the voice director may shut it off before they get there.  So lead with your best stuff.  If the producers like you, they will listen to the rest.

Neil Kaplan made an interesting point during the panel.  He said that “voice acting is a privilege”.  It isn’t just a job.  He also said that some people think that voice actors make a lot of money doing what they do.  Some jobs do pay well, but there are thousands of hours of auditions and demo tapes that the actors don’t get paid for.  Sometimes they do make a lot of money doing a particular job, but that helps subsidize the times they go without pay as they travel around trying to find that next opportunity. 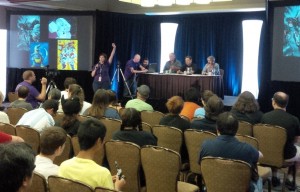 Garry Chalk said that everyone has “12 voices within them”.  He demonstrated how an actor can change the position of the voice within their own body to get a different sound.  For example, he spoke with his normal voice, then switched it projection to be situated at his nose, then down in his throat, then down into his chest.  Each time he did that, his voice changed and essentially created a new character.

Neil Kaplan said that a tool that is useful for him is to name is voices or characters.  When he develops the right sound for a character, he names it.  Then when he heads into an audition or job, he can just draw on that “voices name” and be able to identify the right sound and tone instantly.

The panel also touched on the soul of a character.  Sure people can do funny or distinct voices, but unless you actually put some soul or character behind that voice… you’re just making noise.  The panel made it very clear that they are not just voice actors, or voice over artists – first and foremost they are actors.  That is what they are.  They just happen to be off-screen while plying their craft.  Sometimes we can lose sight of that.  That is why some voice actors are icons within their industry, while “live action” actors just can’t make it in the voice acting world.  Voice acting draws from all facets of acting in general, and to be a success in the industry, you need to do that right from the start.

I have attended a few voice acting panels, and they are a must see at any convention.  There are many great stories from behind the scenes in the animation/voice acting world, and it is fascinating to find out how these actors got to where they are in their career.  They also make the panels very entertaining to attend.