Barry Smith is a rarity in comic book artists. His first work was X-Men # 53 and was very much like many artists who came into comics at that time, a student of Jack Kirby. This issue in and of itself is really remembered because it was Barry Smith’s first work , not because of the Blastaar story it contained. He did a few short stories in Marvels’ horror comics, Tower of Shadows, Chamber of Darkness, a three issue stint on Daredevil(#50 -52) and then came Kazar and …Conan.

When I say he was a rarity, I mean it was rare to see an artist grow right before your eyes in such a short period of time.

The X-Men was totally a young Barry Smith aping Jack Kirby. The horror books were showing a development of style that was unique and no longer looking like Kirby, and by the 3rd issue of Conan, it was apparent that something special was going on here!

I fell in love with the early run of Conan. Sal Buscema’s inks were doing a nice job on Barrys’ pencils but the covers that he inked himself really shone and was a sign of what was to come!

His run was short lived, with a couple of Gil Kane fill in issues, and a reprint of Frost Giant’s Daughter from Savage Tales #1 and ended at #24 with the first full length Red Sonya. One issue was even reproduced directly from his pencils because he was notoriously slow.

Big John Buscema took over Conan and made it his own, but there was something about Barry Smith’s Conan that was, well, a rarity. He didn’t look anything like Robert E Howards description of him, that was where Big John came in, but the Cimmerian as done by Smith was always engaging. 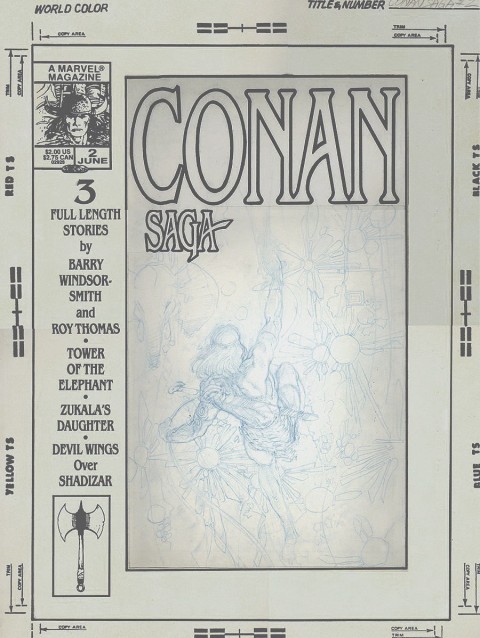 When Marvel relaunched Savage Tales with issue number 2 it featured an incredible adaptation of Robert E. Howard’s Red Nails. Or the first part of it. It concluded in Savage Tale # 3. If you have never seen this story it is available in several formats. The Conan Special Edition #1 was a reprinting in a square bound colour format that can be found quite easily and it guides at $4.00 for a 9.2. It also has just become available in the Original Art Archives Edition. A little more on that later.

Red Nails to me has always been one of my favorites. As a struggling artist , the image of Conan driving the spear through the mouth of the Dragon after dipping the point into the Apples of Derketa is permanently seared in my memory.(Anyone else out there?) What an incredibly designed image.

Barry developed so quickly, his style changed so dramatically every issue he worked on. Many times you will hear an artist say that as they grew as artists they began to use less detail to tell the story. Certainly not in all cases but certainly a good number. Joe Kubert, Frank Miller and David Mazzuchelli and Jack Kirby come to mind. This certainly was true of the second part of Red Nails but I don’t know if that was the dreaded deadline doom or his artistic desire.

By far the best version for me is the B&W Original Art Archives Edition! It retails at approx. $190 but the high resolution scans of the original artwork are a thing to behold.

I would be remiss if I didn’t mention the great adaptation of this story by Roy Thomas. What is really interesting about the adaptation is that Roy doesn’t just lift the dialogue from Robert E. Howard original prose but he truly does adapt it to the sequential art format. This collaboration is one of the best I have ever read.

If you have never read Conan in the original Robert E. Howard stories, I highly recommend it . There are really inexpesive collections usually on sale at you favorite book sellers at almost any day of the week. I picked up mine for under $10 on one of the display tables in one of my favorite booksellers a few years ago and it’s funny because whenever I read them,the stories in my minds eye reflect the comic adaptation done by the creative teams that did the Marvel Comic adaptations.

That is a pretty good testament to the work done by the likes John Buscema and Alfredo Alcala, Tony Dezuniga and of course Barry Windsor-Smith!

Not quite sure why he changed his name to Windsor-Smith but it certainly has been an excellent journey. 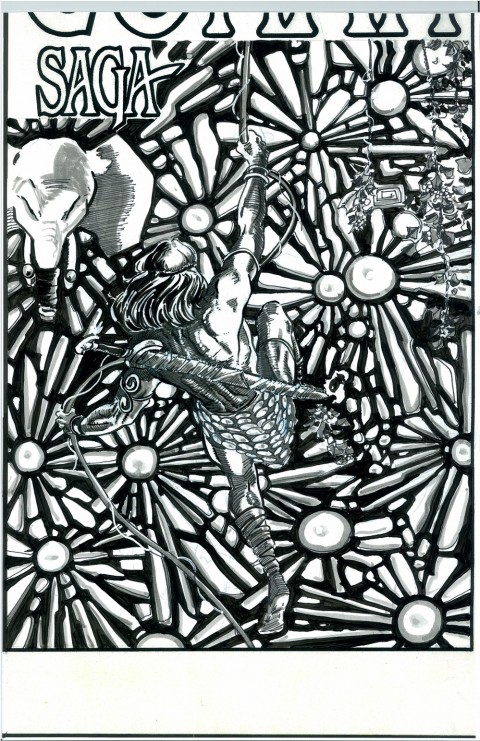 A couple of years ago I was fortunate to be able to pick up the original artwork of Conan Saga #2.These are the preliminary blue line pencils of the cover. I couldn’t resist taking a scan of it and inking it!