I’ve read a few discussions and articles lately that are talking about doing away with “floppys” and going totally digital. You have read some articles and comments on this site. Here is another example.

I hate the name floppys. They’re not floppys . They are comic books. Now I know that digital comics have a place in the world and they may even become the dominant way comic books are read in the future. But to me that would be a sad day for our hobby. I hope it doesn’t happen. 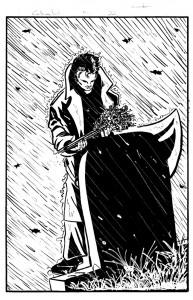 Now I am sure I will be accused of being a dinosaur (check), old school (check) behind the times or whatever, but I would rather look at and hold the real deal, in my hands, with the scent of the acid and paper adding to the tactile experience.

I don’t mind waiting a month for the next issue, or that a story arc takes several months to complete. That is part of the act of collecting a labour of love by a creative team that works hard to produce those pages and therefore you may have to wait a while.

Long Boxes full of my favorite runs, piled up in my comicdenn, and original artwork all over my walls. That is not a problem either. I can’t tell you how much I have enjoyed taking a several issue story arc out of one of my long boxes and over the course of a few sittings rereading a favorite story line.

Yes you would be able to probably purchase more books via digital download but would that not help to drive the cost of actual comic books even higher. Kind of like going to a concert today cost $200 or more for seats because artists don’t sell a million or more copies of an album because everybody is either stealing the creative content or downloading single “hot” songs of the week.

So for me, I’ll stick with the actual comic book, thank you very much. I’ll read the occasional item digitally but it will never hold the same place in my heart as the one, the only, the original…comic book!