That is the title of a fantastic three issue mini-series from Dark Horse Comics from 1997. Predator: Hell & Hot Water. I was out of comics for a decade from about 1992 -2002, and this was a series I had never heard of and only discovered by accident recently.

Gene Colan is, was, and always will be, one of my favorite artists. I have written in this column before of my love for his totally unique artistic style. His unorthodox panel layout and his ability to portray the most mundane scene in a way that is not only interesting but ofttimes beautiful as well.

His career spanned seven decades and was associated with so many iconic characters from Daredevil, to Howard the Duck, Iron Man and Dracula. He was a master at any genre whether it was Romance, Western, Superhero or even Archie.

I was looking online at some pencil artwork of his and came upon an image that I had never seen before. At first I thought it may be from an old Warren magazine that perhaps I  missed but it turned out to be from a series I was not aware of. 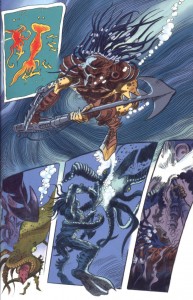 I have written about the great Nathaniel Dusk series by Don McGregor and Gene Colan. How it was reproduced from his pencil art. This was another example of Gene’s work shot directly from his pencils. I have never really been a fan of the Predator series. I did see and enjoyed the original movie but really had no interest in what came after.
I however, became the Predator, to hunt this series down. I picked up the series  in VF/NM off of eBay for less than $10. The story and covers are done by Mark Schultz of Xenozoic Tales. I was floored! The story takes place mostly at sea and under water. I am not going to go into the story so much but the storytelling is a perfect example of just how good Gene Colan was. His layouts convey an absolute claustrophobic experience, and I am sure he was the only artist that could make this story work! I am sure some of you will argue that point but I’ll stand by it. 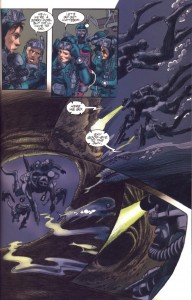 Shot directly from his pencils they are amazingly coloured by Gregory Wright. His palette, mixed with Gene’s artwork result in a perfect marriage between pencils and colorist. The storm scenes above water, and the underwater dives are truly stunning. I encourage you to check this story out. You will see a master at the top of his game.

Mark Schultz also does a great job on the pacing of the story and puts in three outstanding covers. I just hope there are some more surprises in store regarding work of Gene’s that I haven’t seen from the years I was away from this great hobby of ours. He truly is missed in the world of sequential storytelling. A truly original talent. Any suggestions you have for this time period will be eagerly accepted.

There is no one who draws like Gene Colan. Do yourself a favour and check this out.Gene would have been in his 70’s when this was done. A testament to his amazing storytelling! I would love to hear your comments.