Last week I traveled back in time. It was a simpler time. I drank water from the outdoor water hose. I watched Saturday Morning cartoon shows and I read “The Worlds Greatest Comic Magazine”! 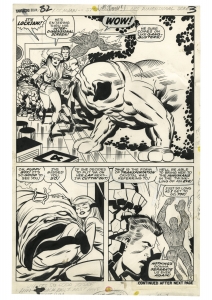 I stepped back in time to wonderment and surprise that can only come to the innocent and wild eyed!

How did I get transported back to my childhood? Back to 1967/68? Well I’ll tell you how. I got my copy of Jack Kirby’s Fantastic Four Artist’s Edition.

Now I don’t care if you are In your teens or seventies! You want to see some of the best art and storytelling ever done in comics? Go buy this  book.

I was transported back, in awe of the Jack Kirby and Joe Sinnott’s artwork. The over the top brilliance of Stan Lee’s prose. You younger guys want to see why us …more mature guys… rant and rave about how great the Silver Age was? Well here it is! What bombast, what pageantry, what grandiosity, could exist in Comicdom? Well all will be revealed in this one volume of the Fantastic Four! 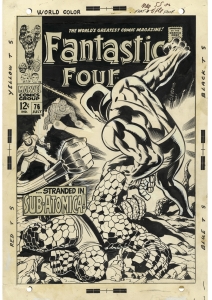 The first issue of the FF I picked up on the stands was #76….Stranded in Sub-Atomica! I had found a few back issues. Number 55 and number 70. At the end of number 70, one of the Mad Thinkers robots had clobbered the Thing, the Torch and Mr. Fantastic. The only one left standing was the Invisible Girl (That’s right…Invisible Girl). Now, I had purchased #76 already, so I knew Sue had survived, but I still wanted to see how she survived! I never got issue 71 until a couple or three years later when one of quite of a few boxes of books were delivered to the end of my driveway in rural Ontario, and their arrival was heralded by the Mail Lady (that’s right…mail lady) by laying on the horn until I ran my excited little butt down that driveway with my heart pounding! I loved that book, and that is the story this Artist Edition starts off with! And it has never looked better!

The thing that really hit me when I looked at this with fresh eyes, was the sheer brilliance of Joe Sinnott’s inking over Kirby’s absolutely fantastic composition. These two artists were truly at the top of their skills together.They were a marriage that really worked! Kirby’s artwork explodes in the beautiful scans of original artwork and Sinnott’s inks make the action and grandeur of the whole story crackle in a way that only they could! 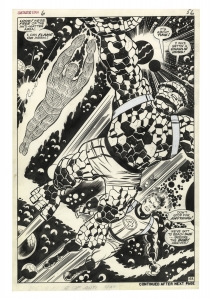 The Annual #6 was my first annual.The birth of Franklin Richards and the life and death emotion that shone through that whole story was made by another perfect marriage. Stan Lee and Jack Kirby! From the opening dialogue on page one, you could tell how desperate Reed was to do anything to save his wife and as yet unborn child. Page 35 panel one, with Reed, Johnny and Ben stranded on the asteroid, powerless and drifting toward the heart of the Negative Zone sums up for me the scope of Kirby and Sinnott. And Stan’s dialogue conveys the momentary loss of hope.

Then comes Issue #82, 83!!! The two part Inhumans Saga! Look at the action and the emotional content again of these stories.The common thread is that these people are a family.And they will die for each other if that is what it takes.Again, action pathos, drama even comedic relief.It is all here!

And number 84! The first thing I noticed was that on page 1 Johnny Storm was a paste up drawn by John Romita. I would love to see underneath at what Stan thought was wrong with Jack’s Torch! This was to me the first part of the greatest Dr. Doom story ever! Check out the vehicle the Inhuman’s give the FF in appreciation for freeing them from the clutches of Maximus the Mad shown on page 1! If any of you have seen the movie Oblivion, which was a really fine Tom Cruise movie by the way, the ship he patrols the dystopian landscape with, is without a doubt, a knock off of the Inhuman’s ship. 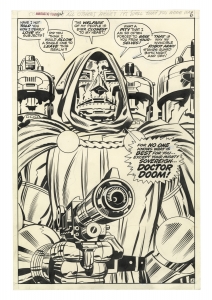 The Dr. Doom saga only has the first part of the 4 issue saga. I’m hoping that shows up sometime soon as well. The street scenes in Latveria, the heavy hand of an iron-fisted government and the fear crossing that Latverian border is palpable.

Then just because you are already out of breath, we get an assortment of various pages mostly from the last half dozen Kirby issues except for…the artwork to the cover of the aformentioned #76!! I’m in Heaven!

In closing, I want to mention the heartfelt forward by John Byrne. The only guy who came close to the right feel for the FF. I would love to see him take another run at them.

So, do yourself a favor. To harken back to that simpler time, run don’t walk, to your nearest bookstore and get yourself a copy of the Worlds Greatest Comic Magazine!