I almost forgot to write this column! I don’t know if anyone would have missed it, but I have gotten into a groove of writing these things on Monday night for posting on Tuesday morning and every week something seems to find its way onto the virtual page. I was talking with a fellow collector this past weekend and showed him the first 45 penciled pages of my Graphic Novel “Splashdown”. Now he had never seen any of my work before, and as it is just penciled pages: there is no inking let alone dialogue, and after he perused through the pages I asked him if he could make any sense of what he was looking at. 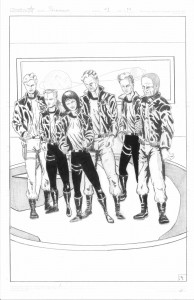 We artists do tend to be very critical of our own work, and I for one appreciate constructive criticism and feedback and was truly interested in what someone saw in the penciled pages. His comment was “this would be exactly how Stan Lee would have gotten the penciled pages from Jack Kirby and then he would have to script them.”

That was the “Marvel Method”. Where DC worked from full scripts and with a very rigid house style, Marvel was having their artists basically run wild with nothing more than a vague plot. The artist’s job was to pace the story and often Stan Lee, and later on Roy Thomas, would be introduced to strange and wonderful ideas they never thought of but were responsible for dialoguing. Most of the time it worked marvellously, no pun intended!

As a result of this method you always hear the bickering in comics fandom, about who created what etc., but that is not the point of this column. There is far too much prognosticating by people who weren’t there and quite honestly I am pretty well sick of the endless banter.

I have recently read several interviews with Silver Age greats talking about the Marvel method and how it made what they were labouring at that much more  enjoyable.

Neal Adams basically taking the X-Men and turning it on its head. The Werner Roth days on the X-Men (no offense to Werner) were really going nowhere and all of a sudden Neal creates Havok, brings Magneto back from the dead, takes the X-Men to battle Sauron and goes to the Savage Land, where upon his return from the Savage Land we find out that Professor X is not dead but very much alive, all in about 10 issues…and then the book is cancelled. Undoubtedly one of the best examples of the Marvel Method working so well. Have you ever noticed that almost every new creative team on X-Men do a story featuring all of the above?

The Fantastic Four under Jack Kirbys’ hand was explosive in the creation of new worlds and concepts. To list them all would be exhausting! Check out 1-102 of the FF. Not to mention Thor, Hulk, Avengers, but you get the idea.

Gene Colan on Daredevil and especially Doctor Strange. The Good Doctors  run under the magical pencil of Gene Colan and inking by Tom Palmer was ground breaking. Still is in my book.

John Romita took Spider-Man out of the 50’s style of Ditko and made them modern, attractive and cool.

Now there are a lot of great stories using the Full script method as well, but over and over again, the best in the  business as a large majority, enjoyed having a freer hand in creating stories with a basic plot to work from.

The magic of collaboration is a mysterious thing. Magic does not always happen just by throwing together big name talent. There is a nebulous energy that needs to find its way through the creators onto the page and into our imagination.

I find myself really enjoying the simpler times of the Silver Age as opposed to the seemingly endless multi book storylines that happen every year at both Marvel and DC. When you look at  the actual numbers of copies sold of individual titles, it is not very many that crack the 100,000 copy threshold.

Maybe it’s more than coincidence. What do you think?