Funny you should ask. The new IDW Artists Edition of John Buscema’s Silver Surfer. That’s where! I have been eagerly awaiting this book since I heard about it when I was speaking with IDW about a year ago when they wanted to use a few pages I have in my collection. It does not disappoint. 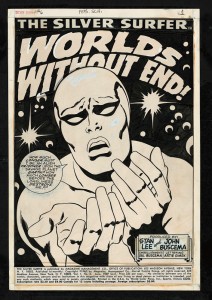 The featured stories are a couple of my favorites of the Silver Age. Often overlooked as a result of everybody’s favorite, Issue #4 featuring the Surfer and the Thunder God. That issue is and always will be to me the shining example of what can be accomplished in this great medium if you have the right combination of story and art.

The first Seven issues were double size $.25 issues. With feature length stories and a small back up story to round out the issue. It’s hard not to use adjectives when describing these books but I loved them all.

The Artist’s Edition features the full story from Issues #5, 6 and 8 with a bunch of assorted pages from several other issues including #1( the cover ) inked by Joe Sinnott and then the 2 full giant size issues which were inked by Big John’s brother Sal Buscema and then issue #8 which was inked by the great Dan Adkins. Chic Stone is also featured in the miscellaneous pages.

Very different inkers indeed and all very capable. It really shows you just what a fantastic penciler Big John was. There was also a very visible physical change that occurred from issue one to issue 8. Everything from the build of the Surfer to the sheen, or lack of, of his outer countenance.

I have always loved the story of Al B. Harper from #5. From the opening splash featuring the Fantastic Four, to the poignant end panel of the story. Behind number 4, artistically, this issue is amazing. From the human interest angle of Al B. Harper’s story, to the authentic look of the hoods in the gambling parlour to the all out menace of The Stranger!

Number 6 with it’s otherworldly Sci-Fi/ Time Travel storyline, again with the human nature aspect of the destructive and selfish nature of man, alongside the futuristic world of the Overlord. This issue featured a look to the Surfer that was the least reflective in as much as the silver sheen was almost totally absent yet the anatomical brilliance of Buscema’s artwork looked fantastic.

Dan Adkins has always been one of my favorite inkers. He worked with Wally Wood for years, and was a very capable artist. A little pedestrian for Marvel comics but when teamed with Buscema or Colan or Kirby he really shone. He had such a steady hand and a clean line when he inked he cleaned up every penciler’s rough spots, which after all, if someone else is going to ink your work, that would be a great asset.

For my money, the format of the Artist Editions and other companies similar efforts, are a great way to see the actual raw look of the artwork that has become ingrained in our comic loving  memories, and really get a close look as to what the original art looked like.

In my last post, I was talking about how John Buscema was a master of  emotive hands in his artwork.This entire over-sized tome is a testament to not only to that, but his storytelling as a whole.

And one final thought. Stan Lee is often made out as either the bad guy or not even a credible writer and storyteller. This too is answered loud and clear in my opinion with the great stories in number 5 an 6.

I wish you continued happy collecting in 2015!