Spectacular Spider-Man #1, for those not familiar with it, was Marvel’s first entry into not only a Spider-Man spin off, but in a B&W magazine format aimed at a more mature market. 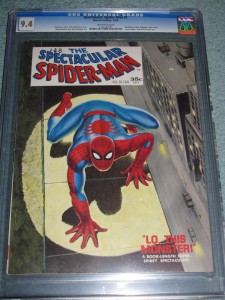 This was a 52 page extravaganza, and the first time pairing John Romita and Jim Mooney together on the art. The artwork was done in wash tones and to my eye looked fabulous! I for one did not miss the colour and marvelled at the oversize artwork. Jim Mooney brought a finish to Romitas pencils that were far superior than the Don Heck pencils with Mickey Demeo (Mike Esposito) inks going on in the 12 cent comic.

Many of you may be familiar with the politically charged storyline which was reworked and reprinted with some minor changes in ASM # 116-118. I really thought that the Bronze age reworking did a disservice to this story. The artwork was originally done in a wash and never looked as good in color. Not only that but I always felt that changing the dynamics of the story to change the Richard Rawleigh character into the Disruptor was the wrong way to go.

This 35 cent (40 cents in Canada) book is really an undervalued book in my opinion. Original in its design and layout, the oil painting cover by Harry Rosenbaum, and the great first teaming of Romita /Mooney and quite possibly one of Stan Lee’s best stand alone stories makes this not only a nostalgic favorite of mine but a great piece of history in the Silver Age. There was also a retelling of Spidey’s origin by Larry Lieber (Stan Lee’s brother) and inked by Sub Mariner creator Bill Everett.

It is a tough book to find in 9.4 and up and when it is available you can pick it up for around $350 or thereabouts.

After about 8 weeks I finally received a Back Issue Price List from Robert Bell. Inside the price list, I found what I was looking for. Amazing Spider-Man # 1 was available for $20! Outrageous, I said! Who would pay that for a comic book? Inside the same envelope was another interesting item. It was the very first bag specifically made to protect comic books! I immediately stuffed $2 (Cdn) in an envelope and sent away for them.

No boards yet, just bags. Boards were another 20 years or so down the road.

Apparently, from all the dealers I have spoken to from that era, we have Robert Bell to thank for the bags that protect our 4 colour comics!