Well it’s been a while since there has been a monthly Fantastic Four (FF) comic, and I for one really miss it. There is now talk of the possibility of bringing the FF into the Marvel Cinematic Universe (MCU) since Disney is in talks to purchase the movie division from Fox. 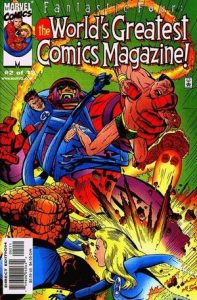 Have you noticed how the FF has started to skyrocket in price at all the various auctions lately? There is confirmation of a Doctor Doom movie as well as a stand alone Silver Surfer movie in the works over at Fox. The Surfer movie has writer Brian K. Vaughn attached to it, who is best known as being the creator of Saga, Runaways, Paper Girls and he also wrote the TV series “Under the Dome”.

Now that seems to be about all that is known about those two projects but I have noticed a lot of activity in the Lee/Kirby FF as of late. A 4.5 of FF#1 recently sold for around $10,000. The key issues featuring the Surfer are on the rise as well. The Galactus Trilogy is seeing some action and we all know about FF #5, 45,and 67 and we could certainly pick more.

Now I could “live in the Silver Age” forever and be quite content, but I recently came across some interesting pages of original art that Ron Frenz was showing on his Facebook page about a series called “The Worlds Greatest Comic Magazine” from 2001. 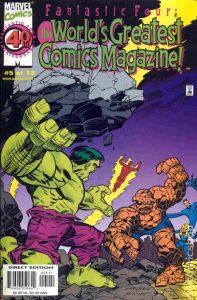 I was AWOL from comics at that time and was unaware it existed. This past weekend was the Toronto Comic Con and longtime readers of this column know I like to pick up a mini or maxi series of something I am not familiar with, so I made it my mission to find this 12 issue series. It looked bleak indeed, and I finally did find the 12 issue series at the last vendor that was in the business of having relatively “new books” rather than  the Silver Age stuff I usually spend my time on.

So home I came with my prize. The series is unabashedly and unashamedly trying to bring back the flavour of the Lee/Kirby run. It seems to be the brainchild and labour of love of Erik Larsen and Eric Stephenson who are co-plotters and Eric Larson does the layout of the issues.

The artists involved are many who are fans of the Lee/Kirby era and each do a few pages of pencils and inks all held together by the layouts of Erik Larsen. 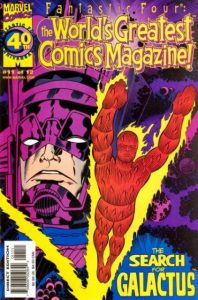 I must say I truly enjoyed it! I maybe would have liked to see the whole thing done by Ron Frenz and Joe Sinnott but they obviously wanted to spread the love around.

Is it a total home run? An epic masterpiece? No it’s not. The rotating artists throughout each book can be a little uneven BUT…it is fun! That’s right, it’s fun.

So if like me you long for a return of the Fantastic Four and the hallowed halls of yesteryear,seek out  this 12 issue series out.If you are anything like me , you will enjoy it!

Lets hope a new FF series isn’t too far away.I for one would love to see John Byrne return to monthly comics and take the FF on another great run!