Well, it had to happen. I had to eventually stumble upon a Steampunk comic. Now I know there’s Girl Genius, (I actually bought a couple of floppies when it first started) and a couple others, but there was something about that air ship that caught my eye, so I wandered over for a closer look at Shadowbinders.

I’m Thom Pratt and my wife is Kambrea Pratt. We work together on SHADOWBINDERS, which is a steampunk fantasy webcomic started in 2010. Prior to doing webcomics, she and I used to work together on Gemstone’s Disney comics. Kam is a certified art teacher, and I work in marketing. We both like Doctor Who.

Sound like decent folk, (loves a Whovian me) and it’s cool to see a married couple as co-creators. 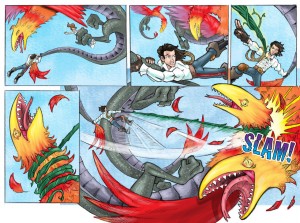 The story of Shadowbinders starts of as rollicking fantasy steampunky goodness. The crew of the True North,battling it out with other sky ships and mechanical monstrosities. Tristan, the brawny blonde pilot, Elaina the female mechanic, young Andrew and the enigmatic Crimson Rhen, mage and captain. And then Mia wakes up to her alarm. 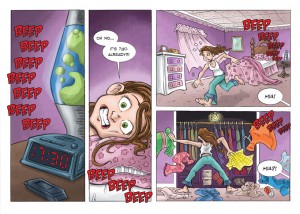 I  know, huh? Where did this modern world teen drama come from? And didn’t I do this last week? Yup, Mia is a misfit high schooler, who finds herself transported back and forth from her own life of boy crushes and mean popular girls to finding herself abourd the True North.

So we’ve got the adventures of the crew, including a rescue of a pet, and Mia’s teen challenges, and we jump back and forth and then there is the overlap as Mia finds herself crossing over. 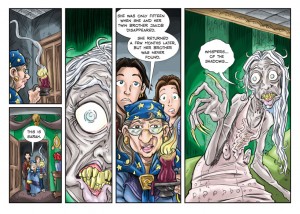 The art on the series is lush cartoony. What does that mean? Well the line art is basically cartoony, but the colouring is rendered in a way that almost makes it look like claymation. As of the latest chapter however, the colouring has changed to a more flat, animation look. The art actually seems brighter and sharper now. But they still have those wild looking airships. And really, it’s all about the airships and Rhen’s smile. 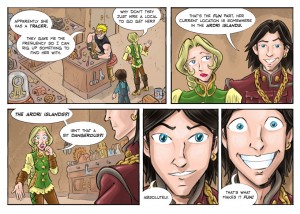 Shadowbinders is just over a year or so old now, with 142 pages so far. The story is still just getting rolling, at least in terms of what it’s larger and longer elements are panning out to be. So again, a great chance to get caught up now and then be able to follow along as the story unfolds. 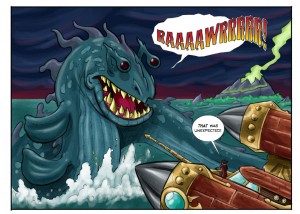 And remember at the beginning when I mentioned other Steampunk type comics, particulaly well known ones? Well this one should be well known but you might not have heard of it yet. Lady Sabre and the Pirates of the Ineffable Aether is a great Steampunky comic, and it should be, it’s done by Greg Rucka and Rick Burchett. Yes, that Greg Rucka and Rick Burchett. What more do I need to say?