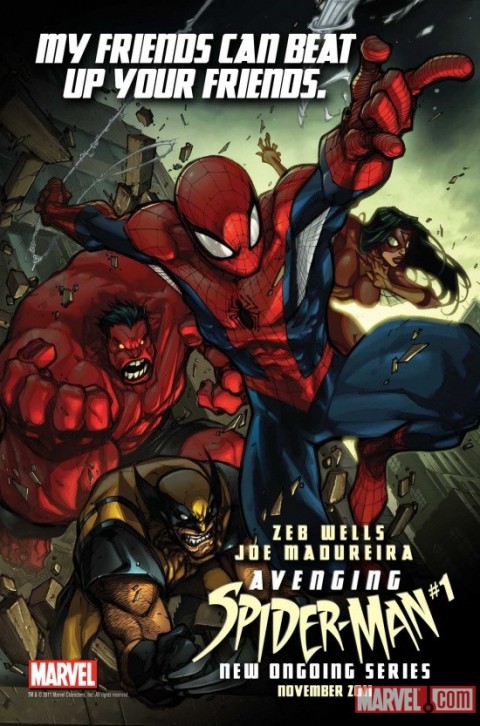 As readers know I talk a lot about the digital medium. I am a huge supporter of the digital medium as an additional delivery method for comic books and graphic novels. At times this has been interpreted as my support for the dissolution of the brick and mortar comic book shop, which could not be further from the truth, and so I am somewhat reticent to return to the topic once again but recent decisions on the part of Marvel and DC compel me to throw my hat into the arena.

Avenging Spider-Man #1 was released last week and comes polybagged with a code to download a “free” copy of the issue. This is another poorly thought out attempt to introduce digital into the way of collecting. Digital is great, digital is here to stay, and digital will not be the death of comic book stores, but man, whoever is making these decisions at the publishing houses seem to have a very tentative understanding of how digital medium works and what customers actually want.

First, let’s talk about the problems with Avenging Spider-Man #1. They polybagged the issue. Presumably because legions of unscrupulous fanboys will be rushing to their local comic book store and writing down/taking a picture of the code. In reality, if there was someone who was going to do this they would merely download the book illegally anyway. Polybagging adds to the cost of the book and prevents customers from flipping through the issue. So you actually are preventing someone from deciding if they want to buy the issue. I know that everything you put out is great and that fans should just buy it without question but really Marvel , really?

The idea gets a bit of a pass if it is only viewed as a one time thing to promote a new title but it should be an ongoing concept. Every book should have a digital copy that comes with it. Like a Bluray/DVD combo pack.

DC is jumping on this bandwagon and will feature some of its titles with a digital download as well. I am glad that poorly planned ideas spread.

This is what should happen: there should be one cost for a digital comic available on the day of release. Let’s say $2. This is the price point that many customers would feel comfortable with. Then you should sell a real comic book for $3-$4. When purchasing said comic book at your local comic shop you receive a coupon for the digital download.

After six months to a year a digital comic book should go into a larger library and be available for an unlimited viewing for an annual fee (much like Marvel does). However, you should use shops as the vehicle to promote digital medium.

Stores should sell Marvel or DC bucks that can be redeemed online. They should also be able to sell digital unlimited subscriptions. Microsoft and Sony do this very well and the comic book industry should follow suit.

The shop is making the same percentage on the Marvel bucks (or whatever they call them) that they would selling the real books. Marvel makes whatever they make and their product is promoted to a wider audience. The customer can still pick up real comics if they wish and t-shirts, silver age books, Magic cards, ugly dolls, or whatever other crazy thing is in the back of the Previews guide.

One thing that I have learned from digital comics is that they make me buy more real comic books, not fewer. Publishing companies are making a huge misstep in not taking this new medium seriously and clinging to archaic concepts of price control and distribution. Eliminating the middle man might seem like a good idea at first because one would make more money per unit; however, if you don’t reach as many customers you are losing money overall.

Sales of books are going down for any number of reasons, but polybagging a coupon seems like an act of desperation from an increasing out of touch head office.