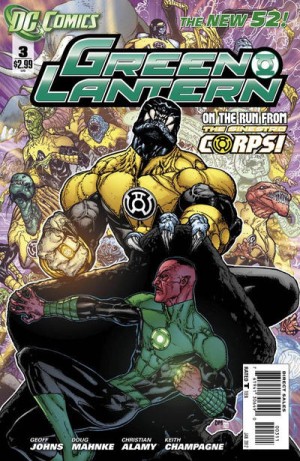 Spiraling out of the events of The War of the Green Lanterns, the Green Lantern title found itself in uncharted territory with long-time GL antagonist Sinestro back in the green and black. Volume five of Green Lantern is now three issues into its run, all with the greatest Green Lantern (villain) at the helm of the title. The question is whether the title is still holding its weight as a story.

After killing Krona at the conclusion of The War of the Green Lanterns, longtime Green Lantern Hal Jordan found himself stripped of his ring and sent back to earth, just as his nemesis, Sinestro, once again became a Green Lantern. After learning of Sinestro’s induction, his former fear-based Corps laid siege to his home planet of Korugar, forcing Sinestro to call upon Jordan for the one thing neither wants: an alliance.

Carol receives a phone call from Tom Kalamaku to turn on her TV to watch the news cast, where she’s quickly shocked to find Jordan and Sinestro seemingly working together. On the scene, Sinestro reasons with Jordan to help him protect his planet from further violence and subjugation from his former Sinestro Corps. Reasoning further that the only thing Jordan hates more than being on earth is not having a ring, Jordan agrees to help Sinestro. Before they fly off, Sinestro’s arrogance leads to Hal flooring him with as single punch; Sinestro laughs it off and flies off with Jordan following him. Meanwhile on Oa, the Guardians resolve to move on to the next phase in their plans to police the universe in the form of creating a third army to replace the Green Lantern Corps, a motion which Ganthet suggests. As Jordan and Sinestro near Korugar, Sinestro fills him in on his plan to attack the Sinestro Corps, one which involves powering down their suits to black, waiting until sunset and then laying siege to the army. Sinestro commences his attack and subdues a number of his former allies, giving Jordan time to take a Green Lantern power battery into the Sinestro Corps power battery, which was supposed to depower the Sinestro Corps rings. Instead, Jordan’s proximity to the battery kick-starts a disintegration process which tears Jordan apart in front of Sinestro’s eyes.

The storyline is becoming much more interesting with each passing issue, with a new wrinkle added with the lobotomy suffered by Ganthet and the new assertion of the Guardians’ wishes to create a third version of their intergalactic police force. It would seem the next phase in Johns’ Green Lantern is to pit the Guardians directly against the Corps which they have employed and empowered to protect the universe. Extending from this is the central relationship between Sinestro and Jordan, which despite their being at odds for the better part of the last 40 years or so, play really well off of each other because their character traits do contrast and conflict with the others’. Even still, we find an underlying bond between them where Sinestro at the very least respects Jordan, while to a degree Jordan still looks inferior to the wealth of Sinestro’s experience and knowledge as a Green Lantern and subsequently learns a little more even now as his student. It’s interesting to see these interactions play out, and perhaps with them aligned, it’ll be interesting to see them strike against the Guardians once their latest intentions are publicized.

I can’t say I’m particularly fond of Mahnke’s pencils. There are instances where his work is pretty nice, such as early scenes of Sinestro using his ring to create elaborate constructs, as well as later panels once the two frienemies land on Korugar. Perhaps his greatest work is in the final pages once Sinestro and Jordan engage the Sinestro Corps on the former’s home planet, notably where Jordan approaches the Sinestro Corps battery and is promptly (apparently) disintegrated. Regardless, the last two pages of the issue look very cool and the colouring work really brings his work to life. However, I still can’t get over how Mahnke draws the faces of his characters normally. Hal Jordan appears to either have these strange, elongated features, such as in the early pages where he’s talking to Sinestro on the Coast City rooftops, or too cartoonish facial expressions, such as when they’re travelling through space and he crashes through an asteroid. I do believe he did well in communicating Sinestro’s arrogance, both in his actions and in his general demeanour. Mahnke is very hit and miss with his work, and as a fan, I yearn for the days of Van Sciver, Pacheco or Reis. Where the Green Lantern titles are concerned, his work simply falls behind the offerings of Green Lantern Corps, New Guardians and Red Lanterns art teams.

The book is coming along rather well. I like what Johns is doing with the title, and although his other work recently has been uninteresting and light, his work on Green Lantern remains strong. Where his other works suffer from glaring plotholes, oversights and relative nonsense, his running plot on Green Lantern has been meticulously crafted over the last seven years and is still hitting its marks. I still recommend this book to anyone, and although the art is a little weak, Johns’ story is very strong and with its latest plot developments, specifically focusing on Sinestro and the Guardians, the pay off could be a huge, universe altering event. Where his Flash/Flashpoint, Brightest Day and perhaps his recent work on Justice League have left something to be desired, Green Lantern is still the solid, fantastic sleeper book it’s been since he took over the title.