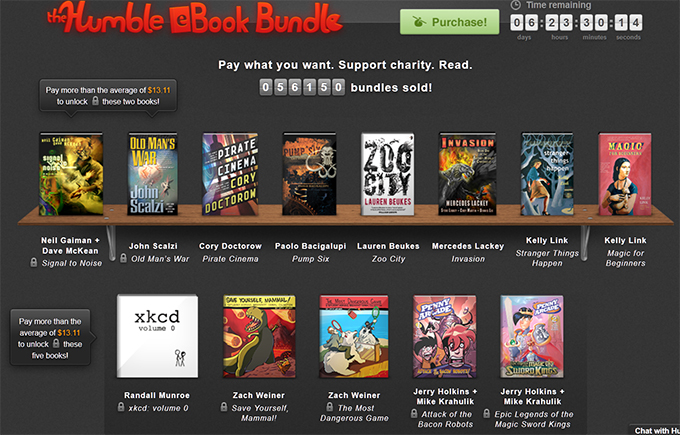 Comic book fans love giving to charity. I have not seen a single convention in recent years were there wasn’t some component that allowed fans to donate money to a good cause. However, if you add some sweet swag to the deal then people are even more likely give. Not entirely altruistic, but a win/win for everyone.

As a purchaser, you get to choose how much you want to pay, but if you meet the suggested donation level then you get even more stuff from the bundle. The money is split between the publishers, the charitable cause, and Humble Bundle itself (for maintenance fees and the like), but you can adjust these numbers to give all the money to the charitable cause if you wish.

As this is a comic book website it is the digital comic book bundles which are of interest to us. At the time of this writing Dark Horse Comics is offering a great bundle on Star Wars comics. Here is what is available:

So that is over a hundred issues of Star Wars comics for $15, and you are helping a charitable organization (in this case the Comic Book Legal Defense fund, but it changes with the bundle).

Dark Horse wisely has provided the first volume of many of their Star Wars titles, so if people are interested in reading further they will need to buy  vol 2, 3, etc. at their local comic book shop or on Comixology, so for a publisher the Humble Bundle is a great way to introduce a wide variety of your product to fans. For fans they get an amazing deal on comics and they get to donate to a good cause, and charities get much needed donations and added publicity for their cause. Win/win/win.

As a comic book fan the Humble Bundle is a great way to expand your digital collection while donating to a charity, what’s not to love?