Clothes make the man. Or in our case, the superman. Or woman. Or alien creature from parts unknown. My point is that a costume is a key part of the identity of a superhero and, by extension, the success of a comic book. Spider-Man has an awful new costume that has only achieved one noteworthy feat: it inspired me to write this column. I should mention that I really love what Dan Slott has done for the Big Time storyline in ASM, but the new costumes are the worst.

Many superhero costumes are so iconic that they have become deeply ingrained in popular culture. Stop anyone on the street and they can tell you what Superman looks like. This instant recognition is an important part of a character’s brand. Why then, oh why, would a company ever decide to change a superhero’s costume?

First off, I will not be talking about characters that have bad costumes. There are several of those. I am only going to discuss iconic characters that had their costumes changed for the worse. In addition, I know that there have been some successful costume changes, Daredevil, for example. The original yellow and brown costume didn’t really work for the character and the all red colour palate fits the name much better. Iron Man is another example. The first set of Iron Man armour is clunky, weird, and blandly robotic. It looks like something from an early Doctor Who serial. Thankfully, the costume was changed to the sleek red and yellow number we now know and love.

But examples such as these are few and most costume changes end in disaster (after a short-lived increase in sales).  Let’s start off with Susan Storm, the Invisible Woman. The founding member of the Fantastic Four has a blue jumpsuit with a number 4 emblazoned on the chest. This costume is the same (basically) for other members of the team. It is functional (unstable molecules and all) and instantly recognizable.

In the 90’s it was decided that she needed a sexier (sluttier) costume to be edgy and different just like Lady Death. This is what we got: 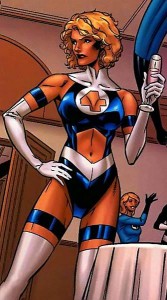 Awesome. There are strippers who wouldn’t wear such an outfit. I especially like the number 4 peek-a-boo window for her cleavage. And so did whatever 12 year old boy who designed this (to this day I refuse to believe an adult man thought of this).

Thankfully, the normal costume we know and love returned and parents managed to keep discussions about the birds and bees away for a few more years.

I chose this example because it is an especially egregious example of trying to fit with the times instead and recognizing when something was timeless. And while Sue Storm is an iconic character she is nowhere as iconic as Superman or Batman.

The Big Red S is probably the most recognizable superhero ever created. Everyone around the world from the dingiest alley to the highest mountain knows what he looks like. But what if Superman became an electric man who could be blue or red? 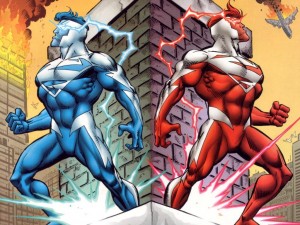 I know what you are thinking. Holy crap, right? Why would someone ever decide that Superman needs to be changed? The costume is horrendous and only someone with a bizarre electricity fetish would ever think that the change was a good idea. 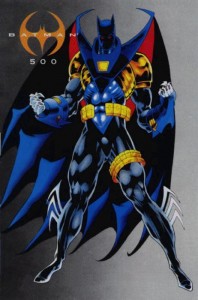 Now some of you may say that because this wasn’t Bruce Wayne it doesn’t count. Wrong. Azrael was Batman (the only one) during this time. If sales had taken off and everyone said “hey, we love that new Batman and his crazy new threads” we would still be reading this garbage today. This costume at least sort of looks like Batman. A messed-up robot Batman from the future that shoots ninja star batarangs from his wrist rockets. Whiskey. Tango. Foxtrot.

Now you might be saying “hey, these examples are from the 90’s and a lot of wacky stuff happened back then”. True. So lets look at some more recent examples, shall we?

Okay. so this one might not be so bad per se, but once you factor in that you are destroying an iconic image that worked, it is pretty bad. Wonder Woman looks like Kid Wonder Woman or Wonder Girl. The pants are sassy, and possibly far more functional than the bikini bottoms but the American iconography is missing. Some will say that this costume is less ridiculous because it covers more of her body. Yes, I am sure that Gloria Steinem is very happy that Wonder Woman has super tight lululemon pants and a red metallic shirt that shows off her abs and chest. She will never be objectified now. Sorry but this is better: 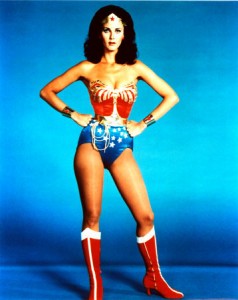 And what of Spider-Man? He started all of this, didn’t he? Here is his new ‘sonic’ costume. 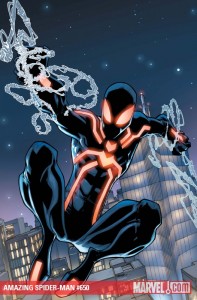 This is the worst parts of every costume he has ever had put into one costume.

Here is the Iron-Spider suit from Civil War. 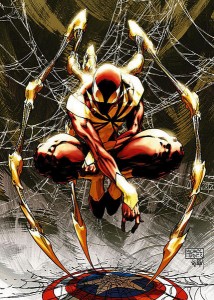 And here is the new Spider-Armor from the latest Previews catalogue. 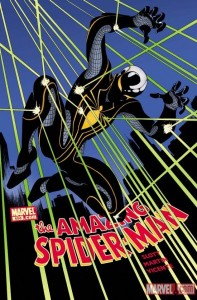 This looks like Spider-Man’s old black costume had sex with Mysterio.

All of these are awful, awful choices. Spider-Man, Superman, Batman are great characters and they need great stories to have people read their titles. They do not need to be gussied up like a $2 lady of the night.

New costumes such as these are a cheap, and painfully transparent, way to sell books. Sadly, it does work. Sales do rise (sometimes minimally) when a new costume is introduced, but pretty soon people realize that it is the same boring old stories with brand new packaging. Lazy storytelling, and all those involved should hang their heads in shame.