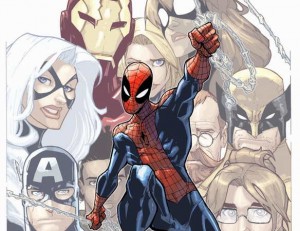 Any of my regular readers know that I am, have been, and always will be a huge Spider-Man fan. Over the years I have owned, and read, pretty much every main title and a great majority of the crossovers. This misspent youth has given me the ability to compare current Spider-Man stories to the almost 40 year history as a whole. Bottom line is, I know what I am talking about here.

In 2001 J. Michael Straczynski took over Marvel’s flagship title of Amazing Spider-Man (you X-fans and Avenger-lovers can suck it, ASM is the flagship title). At the time everyone raved about how great it was (mostly due to Wizard Magazine). But it wasn’t great. It was barely passable. JMS’s main contribution to spider-lore was the notion that Spider-Man is a spider-totem and the spider that gave him his powers was always going to do so but just happened to die from radiation. Oh, and he also introduced Morlun, a pretty sub-par villain that hunts spider-totems and eats them (he apparently sucks at it because it took him 30 years to find Spidey). This run of ASM was lame and was only made enjoyable by the tight pencils of John Romita Jr.

Here at the Comic Book Daily offices we often talk about a writer ‘understanding’ a character. There are lots of great writers out there who sometimes don’t get the characters they are writing about; a good recent example is Warren Ellis’ Astonishing X-Men run. Great writer, characters were written wrong.

That is what the whole JMS run felt like to me. I don’t think he understands Spider-Man. I think he felt that it was necessary to fix something that isn’t broken (on that note: double middles to you John Byrne). The end of the JMS run was dictated by big stories like Civil War and just felt like an adjunct of the event books. And then came the deal with the devil. In a stupefyingly hackneyed editorial choice, Spider-Man makes a deal with Mephisto to save Aunt May’s life at the cost of his marriage. So they re-write about 20 years of Spider-Man history. Harry Osborn is back, MJ and Peter didn’t get married, and Aunt May (who has already escaped actual death once before, see ASM 400 and whatever stupid issue she comes back in) is alive. The devil magically changed comic book continuity. You idiots.

Now at this point the editorial staff at Marvel had really lost all credibility with me. They have a sub-standard product, but instead of trying to create a tight great book they opt to publish 3 times per month. I have already written about this disaster, both in financial and creative terms, but some key points bear repeating. Having rotating creative teams does nothing to help a book. It makes it worse as there is no continuity for the reader. Marvel realized this and gave the book to a single writer, Dan Slott.

While it is still published twice per month (which is once more than necessary), a funny thing happened when Slott was given control: he made Amazing Spider-Man great again. Slott understands the character and respects the character’s history. The Slott run is called Big Time and starts off with a great new Hobgoblin story. And by great I mean the best Hobgoblin story since the classic Hobgoblin/Rose stuff in the 200s. Slott keeps all the great stuff about Spider-Man that we love: great use of classic villains, funny quips, JJJ animosity, and adds new updates that make sense but don’t detract from the character: use of the Avengers and a great new job. Spidey’s new job is one of my favourite things Slott has done. Peter is a world-class scientist but his job is taking blurry pictures of Spider-Man? That works when the character is 15 years old, but he needs to move on. Now he works for a brainy science think-tank (which we can assume will end up being evil, but it is comic books after all). This means he has a job where he can work on web-fluid in private, gets paid a reasonable wage (not being able to pay the rent grows old), and has a great new set of supporting cast members. 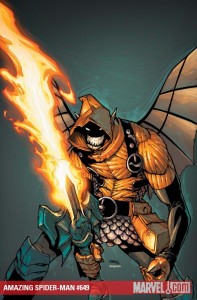 Now Boo-Urns to Slott for coming up with some really crummy new costumes, but hey everyone is allowed a couple of missteps. I also dislike that even though the writer is the same on every issue, Marvel can’t seem to keep a regular artist for more than 4 issues at a time. This is a horrendous epidemic in comic books. A main title needs creative continuity. There can be a fill-in artist here or there, but there should be at least a 12 issue run of the same penciller. These are pretty minor quibbles of mine though, for the bottom line is that this is a great comic book now and one of Marvel’s two must reads every month (the other one is Secret Avengers, if you aren’t reading that: for shame).

So if you have been looking at Amazing Spider-Man in disgust for the last 12 years or so, fear not! Spidey is back on top where he should be. Head into your local comic book shop and check it out: you will not be disappointed.