Rob Granito is having a rough week. The picture on the right is now being used on Facebook profile pages. 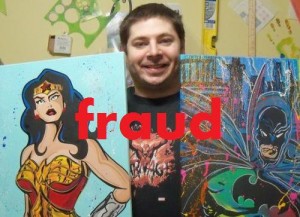 Starting last Thursday, Bleeding Cool published a story about a guy named Rob Granito, comic artist. So why the story? Well, it turns out, although he may be an artist, he isn’t the artist he says he is. He sells prints and commissions based on other people’s work claiming it’s his. He appeared at the Wizard World Toronto two weekends ago and this is kind of where things got started. People began to wonder who this guy is. He had been making his way around the convention circuit for some time now, but only recently was the truth starting to be revealed.

The folks over at Bleeding cool began to wonder about who this guy was, as he had claimed to have worked on Batman and Teen Titans for DC. BUT on his website, under published work, he claims to have also worked on Garfield and Calvin and Hobbes. I think this was the nail in the start of his downfall as it’s common knowledge among the cartooning and comic community that Bill Watterson NEVER allowed anyone to publish his work for him. AND given the zero merchandising that Watterson allowed to be sold (and thus make millions in the process) there can’t even be any production work for that either.
Slowly people state questioning who this guy was and openly confront him via Bleeding Cool.

So now to bring us a little up to date a little, Mark Waid and Ethan Van Sciver approached Granito over the weekend at MegaCon to confront him and his fraudulent ways. According to Waid’s facebook update:

Don’t give me too much credit for the co-smackdown, folks. It’s just that when I heard that he’d tried to capitalize off Dwayne’s death, that was the last straw for me. I saw red and stormed over with Ethan. We were both livid. I told Fraudboy in no uncertain terms that I will personally contact every convention there is and warn them… not to give him a table if they ever want to see me or MY friends there, EVER. I also screamed at him when he said “Well, truthfully–” that he is not allowed to use that word, ever, ever. That word means nothing coming from him.

I believe my exact endquote, two hours before the show closed, was, “Make your money here, because this is your last convention. Do you understand me? This is your last show.” That’s right, I was so pissed, I unilaterally appointed myself Sheriff of All Comicons. I should have a badge made.

I think my favorite moment was when this kid said to Ethan–after lying when asked if he’d actually claimed to have worked with Dwayne (a claim he ABSOLUTELY made)–“I just considered him a friend, same as I’d consider you a friend–” and E…than growled “Let’s make this clear: I am NOT YOUR FRIEND.”

Ok. Well I picked Ethan up from the airport and got an earful. He AND Mark Waid talked to Rob today at Megacon. Apparently, when the “bodyguard” saw Ethan walk up to the table, he stood up, Ethan stared at him and growled “SIT THE **** DOWN” and the guy obeyed like a little dog! (I have never liked the fact that my husband is from Jer…sey up until just now. lol)

“The Chiller Theatre convention has removed Rob Granito from their guest list. I understand Dragon*Con are also concerned and more to follow. There seems to be quite an activist movement. UPDATE – Wizard World have now barred him from attending future cons.”

I think it’s fantastic how the art community is banding together to show this guy for what he is… a fraud.

In fact responses are being made by artists, the best way they can, with art. 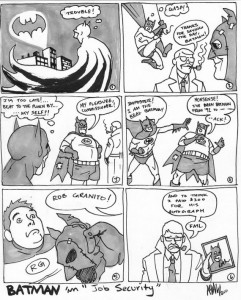 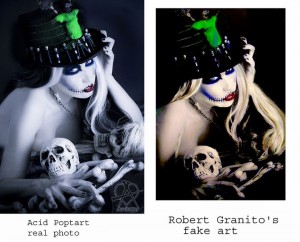 I think the bottom line for this guy is that if he had claimed he was a ghost artist copying other people’s art, he probably would have been okay, but instead he tried to claim it as his own.