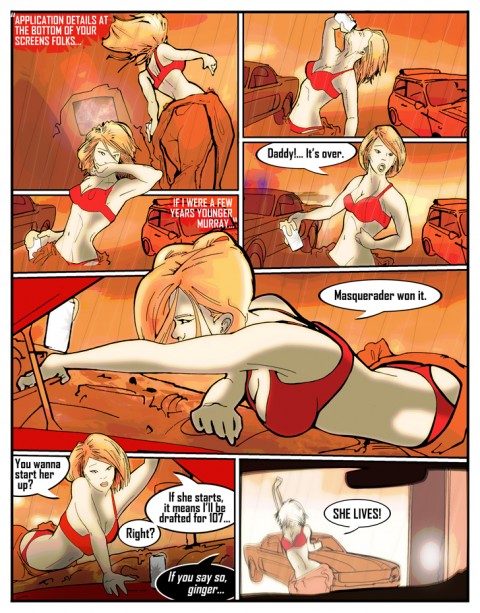 Beau Barbarossa
AKA Red, as her blonde hair is naturally ginger.  However, Beau claims the nickname comes from her emotional attachment to Italian sports cars.
Mechanic

Beau
As a boy’s name (also used as girl’s name) pronounced boh and is of French origin.  The meaning of Beau is “handsome admirer or sweetheart”.

Barbarossa
Derives from Beau’s naval ancestry.  Admiral Barbarossa (Red-beard to Italians) and his cannon-laden, ship-wrecking warships earned their reputation after Andrea Doria decided to liberate Greece from Turkish rule by capturing the port city of Coron in 1532.   After hearing about this defeat, the Turkish Sultan promoted Barbarossa to the position of Grand Admiral and handed him the entire Turkish Navy.

Barbarossa built a huge fleet, relentlessly trained his men and brilliantly planned his counter offensive.  In 1535 he re-captured Coron, conquered Tunis, destroyed Sicily, and terrorised the Italian coast.  His raids angered the Europeans so much, they sent Andrea Doria back a few years later to put Barbarossa ‘in his place’ with some much needed retaliation.  Doria assembled his own, multinational fleet, sailed out to the harbour of Preveza, and prepared to teach Barbarossa a lesson in ocean warfare.

The Allied galleys of Doria were smashed into driftwood by Hayreddin Barbarossa and his — much smaller — Ottoman Fleet.  Outnumbered more than six-to-one, Barbarossa not only demolished the invasion force, he destroyed the combined naval might of five great nations.  The Allies were crushed and humiliated, their ships were sunk and/or captured and its galleys were no more.  The republic of Venice was damaged so much, it was forced to pay war reparations to Turkey and publicly apologize for wasting Barbarossa’s time with such a pitiful and insignificant military effort.