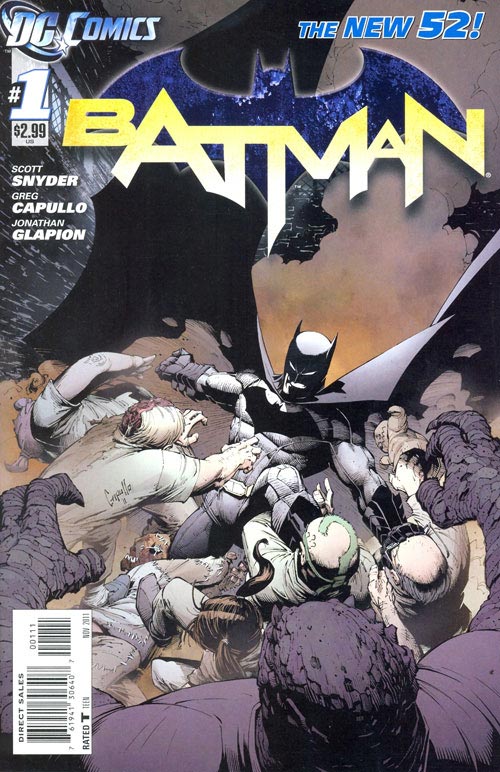 Issue one of the new Batman series hit store shelves last week, perhaps the premier title of the third week of DC Comics’ relaunch. The book features Scott Snyder at the helm as Bruce Wayne is formally returned to the scene of his greatest triumphs and failures: Gotham.

After fighting through time to return to his friends and the city he calls home, Bruce Wayne returned to find his old protegé, Dick Grayson, had taken up the mantle of Batman, while his son Damian had become Robin. Upon his return, Wayne christened Batman Incorporated, an international not-for-profit venture to internationalize Batman’s crime fighting effort by installing Batmen in major cities across the world. Despite performing remarkably, Grayson eventually steps down as Gotham’s Batman, paving the way for the return of the original “Dark Knight” to the city he’s sworn to protect.

On a dark night in Gotham, Batman springs into action with the Joker as they take down a swarm of Gotham’s vilest after an Arkham breakout. Afterwards, Batman confers with Commissioner Gordon on the GCPD rooftop after the event, while Gordon notes some security footage showing Batman clearly fighting alongside the Joker, which he assures the Commissioner would be ridiculous. Inside the Bat Cave it’s revealed it was in fact Dick Grayson who was fighting beside Batman while dressed up as the Joker. Dick and Bruce are joined by Damian and Tim, who together ascend to the Wayne Manor’s main floor to greet the guests of their fundraiser to help revitalize Gotham. Bruce delivers a stirringly emotional speech to garner support for the cause, but is called away once he notices Gordon has stepped aside to answer his phone. Using his wonderful toys, he discovers there was a murder and moves out to investigate. Upon arrival he meets Harvey Bullock, who had been waiting for his arrival. The two discuss the case while Batman sends a DNA sample obtained from underneath the victim’s nails to Alfred who begins to process it, only to discover the sample is a perfect match for Dick Grayson’s genetic code.

The plot was a little light, which I suppose can be expected considering it’s the volume’s first issue. It was still quite good, albeit somewhat unspectacular; the plot’s movement was very methodical and solid in its story telling but lacked any sort of dramatized plot revelations. Instead Synder opts to slowly build the story towards the final revelation of this issue, which he treats as more of a Sherlock Holmes-esque “ah-ha!” moment as the gravity of the reveal is uncovered. Altogether I felt the Bruce Wayne pages where he delivers a speech to potential investors were the brightest points of the issue and suited Snyder’s pacing much better than the Batman sequences at the beginning and end of the issue. I disagree with the reveal itself though as the book concluded, as it’s a plot element straight out of  the recent Batman Beyond mini-series where Dick Grayson is revealed to be the antagonist, Hush. It’s later revealed that Grayson-Hush was actually a clone created by Amanda Waller. While I suspect Snyder’s plot won’t emulate that story, using Dick Grayson as a shock-villain only to reveal later he’s either been framed or it’s not him at all are old-hat story arcs that weigh down an otherwise good first effort towards relative mediocrity.

The issue’s artwork fit the tone of the story, while properly introducing readers to the world of the Dark Knight with an opening page set across the tall, dark, dank buildings of the Gotham City nighttime skyline. Capullo’s pencils on this page capture the Gotham streets’ atmosphere with the dark buildings complemented by the darker shadows, silhouetted bats flying high in the sky or the hard-on-their-luck Gothamites who care only to keep warm throughout the cold night as they stand by a fire within a garbage container. The pages that followed surrendered that atmosphere, as the artwork becomes almost a little too cartoonish concerning how the characters are drawn, worsened in part in this case by Plascencia’s dull colouring that hampers some of the work in this book. This isn’t to say there still aren’t great examples of their work; the bottom of page seven depicting the silhouettes of Batman and the “Joker” fighting back-to-back is a testament to Capullo’s creativity, work which is complemented by four separate panels grouped together in the middle of the bottom section of the page. Each displays two teammates hitting a goon in successive panels, followed by their responses in the third and fourth panels. Yet, it seems for every positive element of the artwork, there’s something that holds it back. In this case, the reader can’t help but notice the height differences between Bruce, Dick, Damian and Tim; Tim and Dick should at least at this point approach Bruce’s height, yet they’re drawn proportionally shorter than their father figure. The issue ends well though with a series of pages after the dulled work in Wayne Manor featuring Batman leaping across rooftops as he approaches the crime scene where Harvey Bullock awaits. Capullo’s work here is excellent, capturing the darkness of Gotham within a single apartment, countering the prevailing message of hope with Bullock’s own realism as he tears down Bruce Wayne’s conception of idealism just as Alfred and Bruce learn, to their surprise, of Dick Grayson’s apparent involvement.

Batman #1 was a good issue, although it was weighed down infrequently by uninspired art and dull colouring, combined with the yawn of a plot revelation at issue’s end. It was still a very solid effort which establishes Snyder’s story moving forward, although this particular arc feels very slow and dull as a microcosm of his larger plot. Although I feel like this book will be quite good, the first issue is hardly an indication of where I feel Snyder will be able to take it in subsequent arcs, where I feel this arcs duelling themes of hope and strife will develop and flourish.