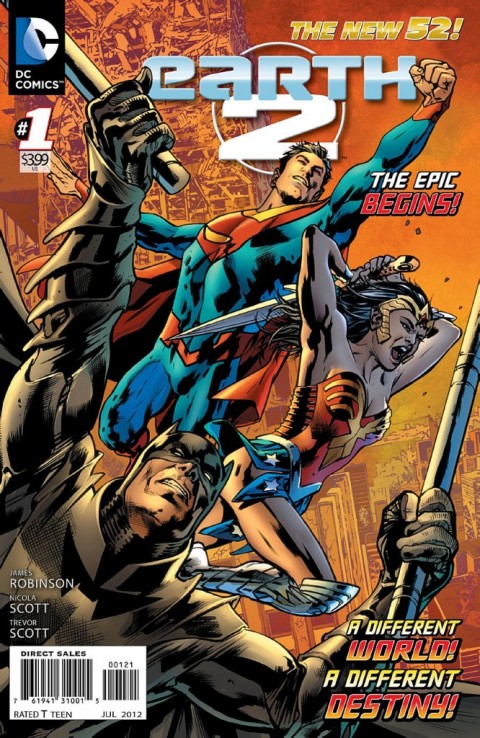 When DC relaunched its line of comics in September 2011, noticeably absent were any titles featuring the classic JSA characters of Golden Age infamy. Even still, at a DC panel at Fan Expo 2011 in Toronto, Canada it was acknowledged that before long, fans of classic versions of Green Lantern, Flash and Superman would get their fill. After many months of anticipation, fans of the characters received the first issue of Earth 2 #1 last week as it thundered onto store shelves and into fans’ loving hands.

Penned by James Robinson, Earth 2 drops readers right into the thick of conflict as marauding Parademons storm the Metropolis streets while Superman, Batman and Wonder Woman defend the lives of the city’s citizens to their final breaths. Complemented by another individual’s narration, the story quickly lives up to the issue’s given title, highlighting the glaring price of conflict on both those directly and indirectly involved in battle. “The Price of Victory” is emphasized through the running narratives of all three characters whom recall their losses and struggles during the latest Apokolipian assault from Darkseid’s forces. It paints a very harsh tone as the three characters deal with the battle; Superman recalls his personal losses, both of micro and macro considerations as he punches and shoots as many foot soldiers as he can. Wonder Woman thrashes, slices and kills as many as she can, while lamenting the loss of both her Amazonian sisters and the Greek gods after a visit by Mercury. While the two superheroic juggernauts fight tooth and nail to bide Batman the time he needs to enact his plan, we find a different, somber tone of resignation and duty from Batman himself. Alone as he enacts his plan to defeat the Parademons, we find the heart of the character drumming loudly in sacrifice to the dismay of his own daughter. The tone of the comic shifts thereafter, bringing the focus onto a young Alan Scott who recounts the sacrifice of yesteryear’s heroes, while a young man named Jay Garrick is visited by Mercury with a dying wish.

Being no stranger to the JSA characters, Robinson was able to successfully reconcile the lack of presence of DC’s “big three” in traditional stories featuring the principal Justice Society characters. In that respect, he gave the three characters both a suitable introduction and sending off true to the nature and core of who they are as archetypes; Superman defended those he swore to protect, Wonder Woman fought to the very end with a warrior’s heart, taking down as many Parademons as possible, while Batman assumed the role of self-sacrificing general, both concocting and enacting his plan to save the world. It’s that wonderful completion to the story that gives the rest of the series its weight, as it removes a generation of heroes from the “playing board” having giving their lives to those they’ve sworn to be guardians for, while paving the road of necessity for a new generation of heroes to assume the vacant role. The book nicely transitions between the final stand of Superman, Wonder Woman and Batman to “present day,” primarily by including a small narrative box at the bottom of the final page of their story, narrated by Alan Scott leading into the pages directly featuring him. The transition was smooth, as was the inclusion and origin of Jay Garrick’s Flash, using Mercury to tie both stories together. Robinson’s tale emphasized the sacrifice heroes make, while also noting the need for heroic civil servants to inspire and protect us.

Debuting alongside Robinson in this title is the duo of Trevor and Nicola Scott. The latter Scott has gained a fair, and justified, amount of acclaim for her work in recent years on Birds of Prey and Teen Titans, as well as her work on the Blackest Night: Wonder Woman mini-series. Although she’s been mostly absent during the company’s relaunch, Scott returns in fine form with this inaugural issue. The first pages of the book begin with a barrage of controlled chaos as the Parademons descend on the city amid gunfire from the U.S. military. The Parademons themselves look menacingly grotesque with their mouths agape with sharpened teeth ready to devour the collective heart of Superman’s city. Then there are the heroes, Batman, Superman and Wonder Woman, as they enact their plan to save the world from Darkseid’s forces. The issue is littered with violence fitting of such a battle as Superman and Wonder Woman subdue many of the attacking army’s members in their own way with great purpose; limbs are removed, jaws are rearranged and measures are taken to ensure the success of their plan. Matching their attacks are their untimely ends, gut-wrenching conclusions to their story as the terror that’s befallen their world is seen in their faces. The heart of the piece though is the solitude of Batman’s infiltration into the Apokolipian tower to upload his virus as the remaining member of the team. The moodiness of the art reflects the solitude and resignation that accompanies the responsibility of the mission. Trevor Scott’s inks capture this mood, accompanying his counterpart’s brilliant pencil work. The shadows engulf Bruce Wayne’s face save for a final goodbye message to his daughter where his somber expression is very visible. The emotion captured defines the climax of the story’s heroes and their self-sacrificing purpose, while the final page featuring the tower’s destruction is anchored by two images of Batman in his final moments and Helena Wayne in the aftermath. Perhaps an unsung piece of the book’s art which indirectly takes a backseat to the Trinity story is Jay Garrick’s meeting with Mercury. Despite Nicola Scott’s remarkable pencils, the final pages of the book are brought to another level of excellence by Trevor Scott and Alex Sinclair’s inking and colouring which paints a beautiful nighttime sky, contrasted against the shine from Mercury’s arrival at Garrick’s feet.

The anticipation attached to this book from fans was warranted, and as it so happens, it was worth the wait. The book is a worthy holder of its pedestal atop the second wave of DC’s New 52, featuring an all-star creative team of an established writer in James Robinson and an up-and-coming artist in Nicola Scott whose work couldn’t be more suited to the poetic violence this script demanded. The dynamic of this story is set as a memorial to heroism, narrated by Alan Scott’s public testimonial to their sacrifice, while establishing the context of what it means to be a hero in this fictional universe. It creates an integral example for these characters to live up to and aspire to grasp, creating a legacy for them in the same way the JSA was retconned to have set for the Silver Age characters. In that respect, it also explains away the absence of the Trinity from JSA stories, acknowledging their classic omissions from the team roster. The issue was captivating, nicely incorporating the core traits of the Trinity into one solemn last hurrah as they defend their world, giving every inch of themselves so a new generation can carry their torch into a new day. Earth 2 #1 is an example of the heights comic book storytelling, both written and visual, can reach.