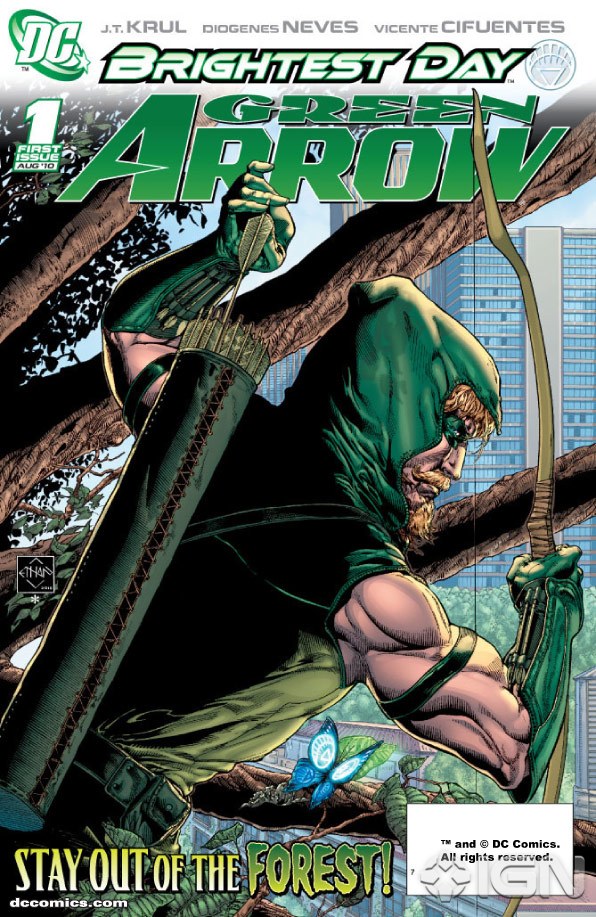 In the wake of Blackest Night, numerous DC titles have been sporting the Brightest Day banner while others such as Birds of Prey and Green Arrow have been relaunched entirely under the same banner. Where Green Arrow is concerned, this relaunch means a shift in the status quo for Oliver Queen, the Green Arrow. With a solo title of its own for the first time since Green Arrow/Black Canary launched over two years ago, the character faces a new set of challenges in the aftermath of Cry for Justice. Let’s take a look at the first issue. 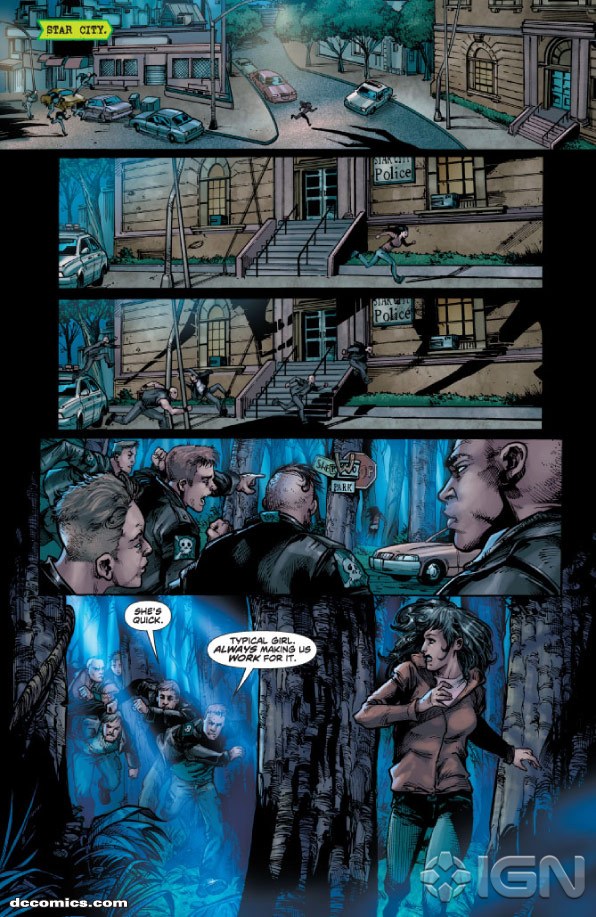 The relaunched Green Arrow title picks up after the events of James Robinson’s Cry for Justice and the follow-up issues Justice League Rise and Fall and Krul’s own two issue arc titled The Fall of Green Arrow to conclude the previous volume. Now with his city destroyed, his marriage in ruins and his adopted son overcome with grief over his own daughter’s death, Queen has inadvertently alienated himself from his closest allies. To top it off, his own city’s judicial system sentenced him into exile for his part in a villian’s death at the end of Cry for Justice. Yet, amidst the destroyed buildings and broken lives, a wondrous forest sprung up, a forest somehow tied to the formation of the white lantern in Brightest Day. Now living inside the forest, Queen embarks on a new/old adventure; fighting against corruption, and fighting to protect his city.

For the most part the first issue of Krul’s run only intends to establish the foundation for the new status quo. The action kicks off almost immediately as a young woman is chased by a group of male pursuers into the mysterious forest within Star City. Krul wastes no time introducing Green Arrow to the attackers as he shoots an arrow at one attacker, forcefully removing his nose-ring, while hitting another in the arm. Queen makes it very clear that this forest is his to protect.

As Queen helps the young woman find her way out of the forest, they chat about the city and how bad things actually are, and while also commenting that so much more needs to be done to help rebuild the city. It’s faced so much tragedy that broad governmental proclamations and handouts aren’t enough. Krul then places an exclamation point on the book’s mission statement, highlighting the destruction of fundamental infrastructure throughout the city, while the business sector remained intact and thrives. She points to her community outreach projects as examples of the underfunding and lack of aid that the city is receiving. These first few pages look to re-establish Queen as a protector of the people and their interests; the discouraged and downtrodden, the hungry and sick. Krul also lets us know that Queen will not be alone in his fight against the power holding elite, because people like this unnamed woman will be there to help out in her way.

Sticking with the theme of the city’s elite not doing enough to help the city recover, a lavish fundraiser is thrown where they claim the proceeds will be going towards relief efforts, but when questioned by a reporter about whether ALL the proceeds would be used, the city’s mayor refused to comment about how the event was being paid for. Inside, the guests seem to be enjoying themselves at the party, until a mayoral aide informs the mayor that all the food has vanished. We then flash ahead to a shelter, where an entire truck of food is unloaded by Green Arrow and given to the people staying there. In the aftermath the police commissioner, still irate over what Arrow did and seemingly on his last nerve, is stuck in a traffic jam with his convoy. He gets out of his escort car to see what’s going on, and is then stabbed by a disguised construction worker who quickly flees the scene.

In the final pages of the issue one, Isabel Rochev, the new owner of Queen Industries and new antagonist to Green Arrow, makes her intentions clearer. She proposes to save the city from the chaos it’s turning towards by implementing Star City’s own National Guard complete with high tech combat suits. She then proclaims that she wants to remove Green Arrow from the equation, and that anyone with a green mask is be taken down just as Oliver’s old partner in crime, Green Lantern, flies onto the scene. 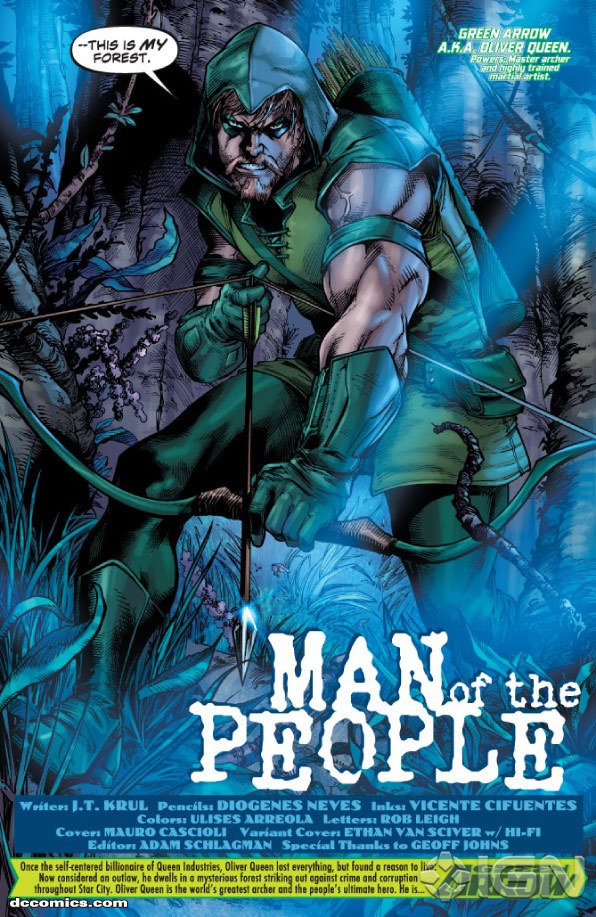 From the cover to the interior art until the end of the issue, the art is pretty awesome. It’s a nice treat as a long time reader of Green Arrow having suffered through some less than stellar artwork over the past few years. In that time, it felt like much of the art was too cartoony and flat. This artistic team though shines its brightest in the opening pages of the issue during the forest scenes. They capture the denseness of the forest complemented by the slightest peaking of sunlight peering in through the forest’s canopy. The issue is beautifully painted and detailed. We see everything from the determined resolve on Green Arrow’s face, to the sadness on the young woman’s face when Queen tells her that “Green Arrow” is who he is and all he has left. There are some other nice touches such as Oliver standing alongside the woman as they exit the forest, overlooking Star City’s ruins. In this panel there’s just a hint of the sunlight shining onto Oliver while the wind’s breeze blows both the leaves and his hair back. Even nice little touches like the seagull flying overhead add a level of intricacy to the artwork not seen in a Green Arrow comic for some time.

One of my favourite pieces though is in the opening scenes where Arrow shoots a nose ring off an assailant as he attacks the young woman. If you follow the panels, you’ll read along the top of the page to the right, and then when Arrow shoots an arrow and “removes” the assailant’s nose ring, you can actually follow the arrow diagonally across the page to the left to the next panel. The team even captures the trail of blood spiraling around the arrow as it travels to the next panel, while the end of the assailant’s nose and nose ring is attached to the tip of the arrow. Nose hairs and all.

The new Green Arrow team was fairly impressive in their first outing. The book for the most part aims to bring Oliver Queen’s Green Arrow persona back to its Robin Hood roots, similar to its classic Silver Age stories. Although not as politically leftist as those stories were, this take on the character reestablishes Queen as a champion of the common person, willing to take the fight to the corporate elite on their behalf. Krul’s Green Arrow isn’t as glaringly political however, so you thankfully won’t see Queen referring to anyone as a Fat Cat.

After the past several years of sketchy direction ranging from Oliver Queen, Star City mayor to the novelty act that was the Green Arrow/Black Canary series, this book strips away Queen’s supporting cast and everything past books defined him as. In its place, we see a return of the socially conscious, classic Oliver Queen who quite literally steals food from the rich and gives it to the poor in this issue.

If this is the new status quo, then I feel it’s heading in the right direction. This issue introduces a new antagonist for Queen, someone who’s the complete antithesis to what Green Arrow stands for. We also see the introduction of a female character who shares philosophical similarities to Queen, perhaps giving him an equal. Further the very anti-corporate mantra established early and carried throughout the issue will no doubt put Queen at odds with the new elite within the city, both within the city’s political sphere and his former company now owned by a shady female character we know nothing about other than she sports blonde locks similar to Queen’s.

The book brings several things to the table. Beyond its art which is levels above previous runs on Green Arrow books, Green Arrow may finally have an equal to his conscientiousness if the female character becomes a regular character. Also, it’s added a veil of mystery as to the identity of Rochev and what her motivations are, not to mention the identity of the person who killed the commissioner. The book also teases potential comrades for Queen. Although Speedy will likely be one (the obviously female character is holding a bow afterall), the other three are somewhat perplexing in a positive, head scratching way. The one thing above all though that Krul adds is a level of social commentary that has been absent from Green Arrow in the past, not only in the character’s actions, but communicated by the writer through the character. In this issue, we see Krul commenting on the motivation behind government reactions to natural disasters and disaster relief efforts, an obvious nod towards the horrible earthquakes in Haiti and Chile, not to mention the oil spill in the gulf coast in the southern United States. If this book is to return Oliver Queen and the Green Arrow title to prominence, then this is a promising start.