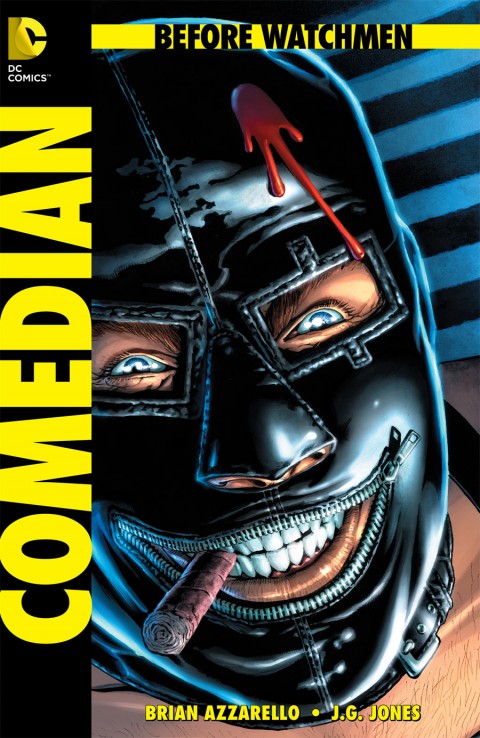 On the heels of its first two Before Watchmen titles, Minute Men and Silk Spectre, last week DC released the third entry in its set of prequel stories plotted before Alan Moore’s infamous Watchmen series. The Comedian follows suit comparably to the previous Before Watchmen books in their portrayal of the principal characters’ lives leading into Moore’s work, and while each has added considerable layers to pre-existing elements of the plot and the respective character histories, inevitably they suffer from the same affliction inherent to the premise of these tales. 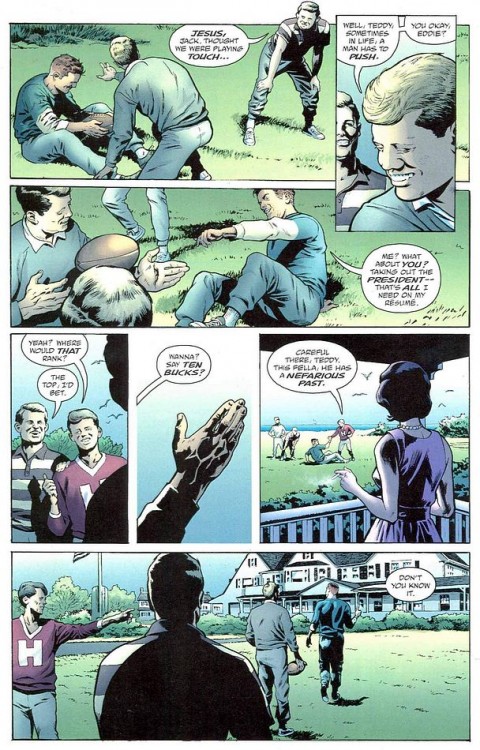 Azzarello’s first foray into the Watchmen sandbox begins upon establishing an immediate bond between Edward Blake, better known as “The Comedian,” and the Kennedy family. Using the Kennedy’s country estate as a backdrop, we find Blake and the family to be very close, cemented by his having served in the U.S. military with JFK. The relationship itself flies directly in the face of established continuity. It would seem as though this aspect of The Comedian’s story was manufactured and hardly feels organic against the development of his character. The JFK relationship contrasts the allusion to The Comedian’s relationship to Richard Nixon, a dynamic altogether omitted from Azzarello’s story. In its place we find Azzarello inserting the JFK-Blake relationship almost entirely for the purpose of trying to mimic a shock element reminiscent of Zack Snyder’s inclusion of The Comedian onto the Grassy Knoll and casting him as JFK’s killer in the Watchmen film, alluding to the long held belief he was somehow involved. Instead, The Comedian #1 revises Watchmen history and omits this, and instead implants Jacqueline Onassis as a conniving, almost Machiavellian character as she effectively orders a hit on Marilyn Monroe, a task tastelessly included and carried out by Blake. Continuing the revisionism of the story, we find Blake nowhere near Dallas on the day of JFK’s assassination, elements which contradict pre-established ideas, doing so for no conceivable reason other than to streamline the character for writing’s ease. 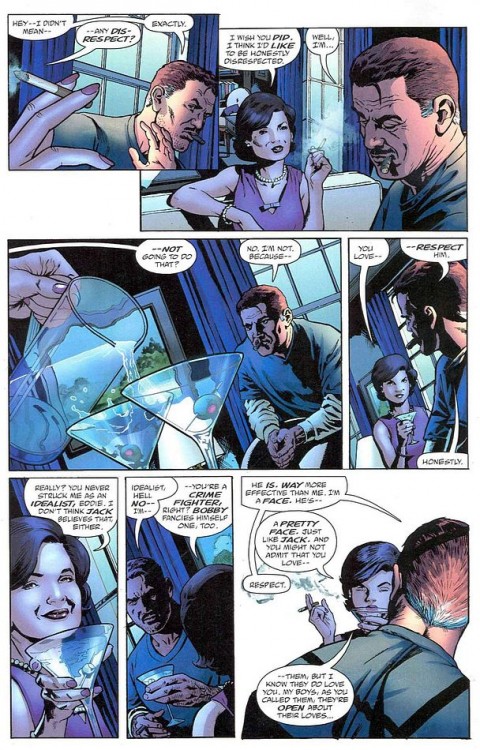 Despite the clear contradictions with the original work, Azzarello blends existing elements with his own conceptions resulting in an accurate characterization of Blake as a man willing to do what’s necessary for the protection of his home and native land, or more specifically, that his friend’s image is not compromised. The book contained some additionally poignant character interactions, notably between Moloch and Blake, establishing the foundation for their eventual confidant relationship as seen in Watchmen. This is a slight nod to Blake’s visitation of Moloch prior to his own death, however in looking at the conditions surrounding this specific encounter it’s difficult to avoid noting the inorganic nature and forced conversation between two opposites bonding over the assassination of a beloved American president.

While the plot is weak and lacking worth, J.G. Jones turned in amazing pencil and inking work with his contributions to this Before Watchmen title. It’s difficult to choose a single point of reference for where his talents shine, as the entire issue blossoms with creative, intuitive artwork which breaks the borders of normal panel work to lead the reader’s eye across the page, or in other cases, honing in on specific items of note in a given environment. This adds a layer of detail to the visual storytelling, which itself can’t be faulted for the scripting. Jones employs a number of methods to accomplish this, ranging from bleeding characters across several panels, such as in the opening football pages, to the Monroe pages which focus in on her empty eyes while the scene is pulled back later to reveal more of her face along the left of the page; the scene is then concluded as The Comedian walks away. Jones’ stylistic variance is again evident towards the end of the issue where he slants the panels during an action sequence later in the book where The Comedian leads a raid against Moloch’s drug operation. It’s also here where the emotions rising within Blake and Moloch are visibly transparent, demonstrated in how they attempt to console one another over JFK’s condition despite their obvious conflict over Moloch’s drug trafficking operation. A teary eyed Moloch can scarcely draw his eyes away from the television screen as JFK’s death is confirmed, while Blake resolves to have a stiff drink and strongly alludes to drug use in response. Despite disagreeing with the plot itself, the issue ends with a strong emotional note, with The Comedian placing his hand on Moloch’s shoulder, both in disbelief over the transpired events. 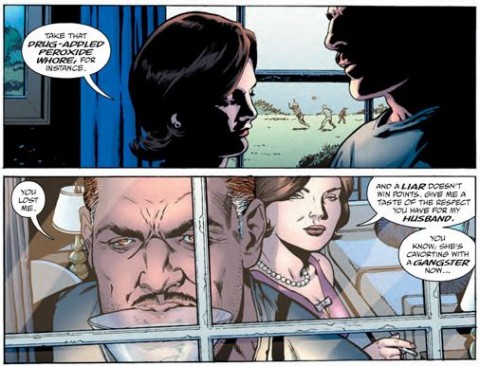 Where the first two Before Watchmen prequels integrated pre-existing elements from Watchmen and paid homage to Moore’s work, Azzarello failed where Cooke showed flashes of sensibility, displaying a very clear balance between taking the original work, paying homage to it and building from its foundation. The Comedian #1 fails to do this, and instead opts to create its own plot threads rooted very shallowly in established ideas. This hurts the experience and adds fuel to the argumentative fire from those against the prequels. This book was a resounding disappointment save for Jones’ tremendous artistic contributions, however that disappointment emanates not only from the book’s detachment from the source material, but also from the unmet expectations placed upon Azzarello as a respected and renowned comic book writer.