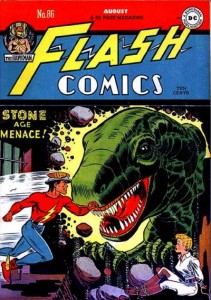 It’s been a while since we visited the Golden Age. It was Undervalued Spotlight #172 to be precise, not that I’m trying to plug that post or anything.

The seeds for this post were planted a short time ago while I was visiting my friends at the Silver Snail in Toronto. On my way out Snail owner George Zotti treated me to a coffee from the Black Canary coffee shop located conveniently right in the Snail. Good coffee.

I actually started thinking about the Black Canary on the way home (I know what you’re thinking). I was certain her 1st appearance was within the Flash title but in my mind I had that white cover image where’s she’s popping out at us like from a birthday cake (actually that turned out to be Flash Comics #92, 1st solo Black Canary).

Just so you know, this is not some random Golden Age 1st appearance I just dug out of the coal mine, I really think Black Canary has the goods to stay in the pop culture mix for years to come and in a prominent way. She is part of a great stable of female heroes DC is doing wonders with.

She’s belonged to the JSA, the JLA, she’s lead the Outsiders and is currently the leader of the covert ops team Birds of Prey. She’s associated with Green Arrow, sometimes crime fighting partner and sometimes romantic interest, she’s even had a history with Ra’s Al Ghul, having once been saved by the Lazarus Pit.

The Black Canary has turned out to be a very versatile and marketable character for DC, she is all over other media especially TV, showing up, in 2002, in the television series Birds of Prey, in 2008 in the Smallville series and most recently in the Green Arrow inspired series Arrow.

Currently fans are a buzz for the upcoming “Black Canary and Zatanna: Bloodspell” graphic novel by Paul Dini.

Through the years it was established that the Black Canary was in fact two characters, mother and daughter Dinah Drake and Dinah Laurel Lance. This was a formula often used for other the Golden Age to Silver Age transition but I’m glad it didn’t stick.

In 2011, when DC Comics re-launched its continuity it was re-established that Black Canary is indeed a singular super powered heroine, Dinah Lance (née Drake). This way is better and I think the alter ego continuity for Golden Age characters is a plus. The Flash went from Jay Garrick to Barry Allen, Jay who? It’s a small point but it helps, think Clark Kent, Diana Prince.

Black Canary was created by the writer-artist team of Robert Kanigher and Carmine Infantino.

Robert Kanigher is one of the most important DC writers not many people know about. He took over Wonder Woman from creator William M. Marston and stayed 20 more years. Kanigher also ran much of DC’s war titles, he helped create  Sgt. Rock for Pete’s sake. Yes and Kanigher also wrote the “Mystery of the Human Thunderbolt!” which introduced Barry Allen as Flash in Showcase #4 (Oct. 1956).

Only 19 copies have been graded but many are still out there, ungraded. I remember having one of these maybe a decade ago and I seem to recall it being a tough sell. I wish I still had it because things are different now.