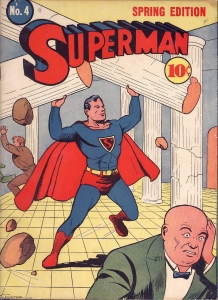 Looking back I can see that I haven’t had the best relationship with the Superman title. I’ve always thought the value of Superman #1 to be inflated versus say Batman #1 and maybe that’s why I’ve struggled to include the title in the 300 plus Undervalued Spotlights posted to date, there’s only been 3 and 1 of those was written by Mike Huddleston.

I’d like to shine this week’s Undervalued Spotlight on Superman #4. While the book does not necessarily satisfy Durajlija’s Equation for Iconic Golden Age Covers (DEIGAC) it does deliver on many other levels (and it is a strong cover).

Maybe I should have started by mentioning that Superman #4 is an amazing book, it features the 2nd mention of the Daily Planet and it delivers the 2nd and 3rd appearances, both with the red hair, of Superman’s arch enemy Lex Luthor (there are 2 Luthor stories in the book).

Superman #4 also marks the 1st issue in the title to feature original stories, no reprints!

For me the obvious superiority of Superman #4 over Superman #3 begs the question why such disparity in value? And when comparing what #4 gives us up against issue #5 I wonder why the values are so close.

Superman #4 is where the Superman as a title really starts, delivering new content with every new issue.