Winter’s finally behind us and let’s see where we’re at. I’ve come to the very end of working on the finishing touches of my Heroes of the Home Front book and it’s sitting at about 330 pretty cool pages. The PDF has been submitted to the overseas (read Chinese) printer and I’m waiting for the proof copy to arrive. 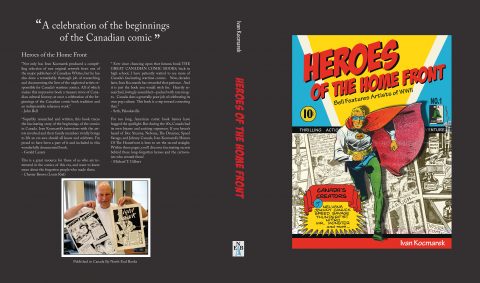 I’m going to produce 450 copies and about 250 of them are already accounted for by Kickstarter supporters. Just over a hundred of those will be signed by myself and Gerald Lazare and will come with an embossed slipcase. Of the 200 left, I’ve set aside some of those copies for individuals who have helped with the book and some for people who missed out on the Kickstarter and have contacted me saying they still want a book (if there are any more of you out there who would like to reserve a copy of Heroes of the Home Front before they are all gone, send me an email at [email protected] ). I also want to see if I can get some into some of the local libraries, not to mention the fact that, by law, two copies of every book published in Canada must be deposited in the Library and Archives of Canada (LAC). Here’s Article 10(1) of The Library and Archives Act of Canada:

10 (1) Subject to the regulations, the publisher who makes a publication available in Canada shall, at the publisher’s own expense, provide two copies of the publication to the Librarian and Archivist — who shall acknowledge their receipt….

My understanding is that if you publish 100 copies or less of your product you only have to deposit one copy with the LAC. I believe that this means that all you independent Canadian comic book producers are compelled to send one or two copies of your published product up to Ottawa as well.

Remaining copies will be flogged at cons (beginning with Niagara Con I hope), sold through a web page, and possibly sold on eBay.

Our WECA Comic Price Guide is also finished and will be printed by Alfonso Espinos’ Studio Comix Press with a planned run of 200-250 copies that will have a cover price of $14.95. Right now, it sits at about 80 pages checklisting and valuing approximately 780 comic books printed in Canada between 1941 and 1946. This information has never really been compiled anywhere before and that’s what makes this book valuable, not the actual prices we’ve assigned. 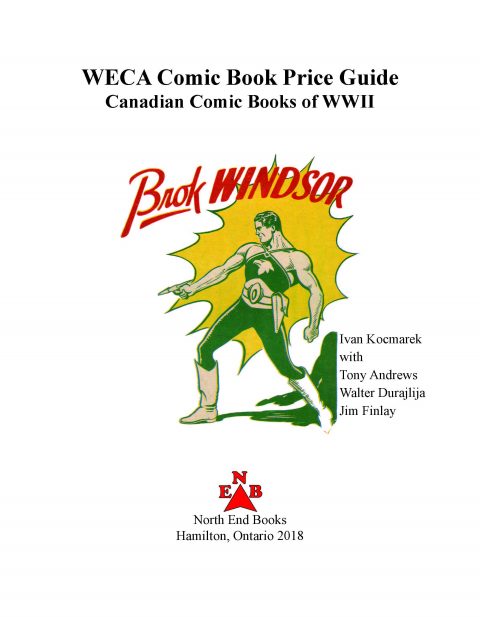 Here’s a question related to the price guide that I’d like to get your opinion on. A Canadian promo-giveaway type comic from 1942 came to light by showing up on eBay last week. Its title is Eat Right to Work and Win and it was produced in Toronto by Swift Canadian Co. Limited with comic strip extracts licensed from King Features Syndicate Inc. in the United States. Here are some pics to show you what it looks like:

To me this is a 16-page info pamphlet that uses some, possibly newly-drawn, King Features characters for the edification of a war time audience. It may even be the counterpart of a similar product that came out in the United States, though I’m not aware of it. Should this be considered a comic book that needs to be included in our guide or not? I’d value any opinions on this. I mean, it’s Canadian, published in the heart of the WECA period, and uses American comic strip characters, but is it a comic book, and should it have a rightful place among a checklist of comics that are homes for characters like Nelvana, Brock Windsor, Freelance, and Canada Jack? 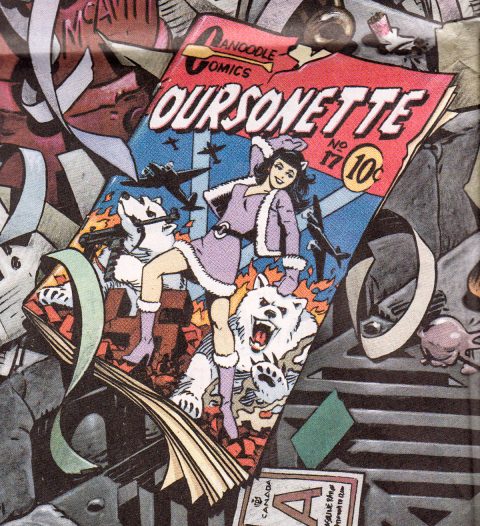 Do you remember Margaret Atwood’s wonderful short story printed in last year’s Canada Day issue of The Globe and Mail called “Oursonette” about the WWII era of Canadian comic book publishing? The art for this was done by Ken Steacy and Ken has alerted me to fact he and Ms. Atwood are in the process of putting together a three-issue run about the fictional writer and artist of this character. The comic will be called War Bears and will be put out through Dark Horse and the first issue will be out right after this coming Labour Day. Can’t wait to read and add this gem to my collection!

Along with American comics, American pulps were banned from entering Canada by the War Exchanges Conservation Act in late 1940 because they were both deemed unessential imports that would send Canadian dollars out of the country and work against the Canadian war economy. Just as Canada began creating its own original set of comics, it also began making its own pulps. Besides creating original new product, the Canadian pulp industry also seemed to be able to get away with reprinting the guts of months old American pulps and slapping a Canadian drawn cover on them. This situation led to an inevitable cross-over with some of the Canadian comic book artists also working on pulp covers. Let’s look at some of the ones we know about.

The first that comes to mind is Ted(d) Steele. Steele began his illustration career in Canadian Pulps about a year before he began drawing for Cy Bell and creating such characters like Pvt. Stuff in Joke Comics and his signature hero Speed Savage in Wow Comics. He began drawing for pulps just after he had turned 19 with a cover for the May, 1941 issue of Uncanny Tales, which was Canada’s first science-fantasy magazine, and for the May, 1941 issue of Victory in which he introduced one of the first Canadian costumed heroes who was named Rock Thunder. A month later Steele created a super-powered costumed hero called Wolf Savage for the first and only issue of a tabloid-sized newsprint publication called Rocket. This early Steele artwork was primitive, but he would develop into one of the most dynamic comic artists of the WECA period. 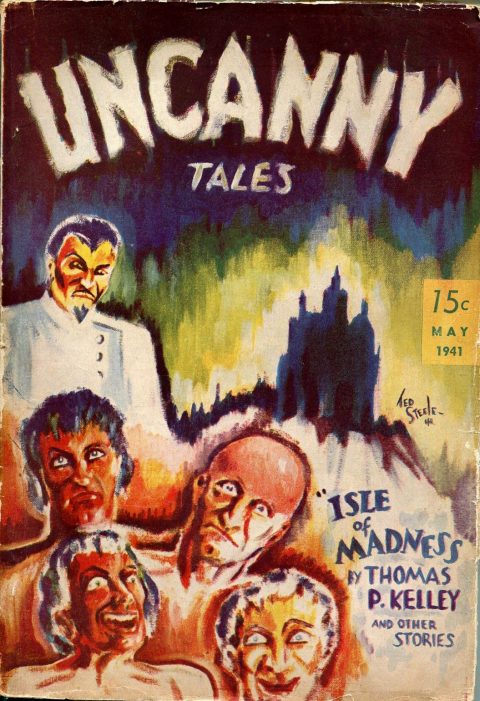 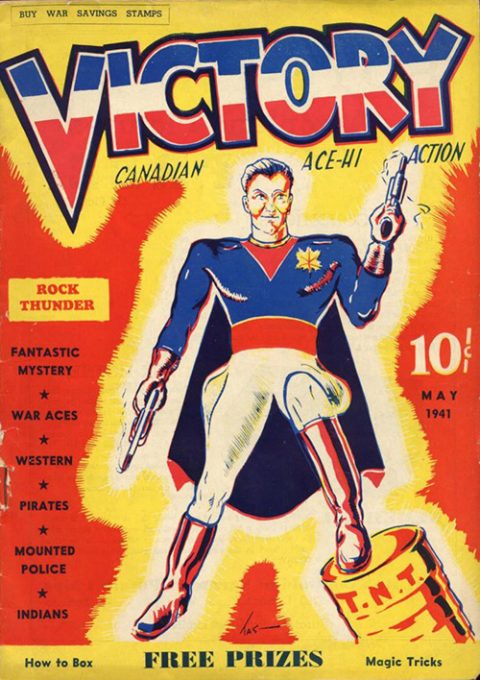 Next is Harold Bennett. He only did one comic book story for Bell Features and that was “Rocky Summers” in Active Comics No. 27 and another titled “Tanya” for Al Rucker’s same contents, different covers United Nations War Heroes/United Nations Battle Heroes. His name is also on the cover for the War Heroes version. 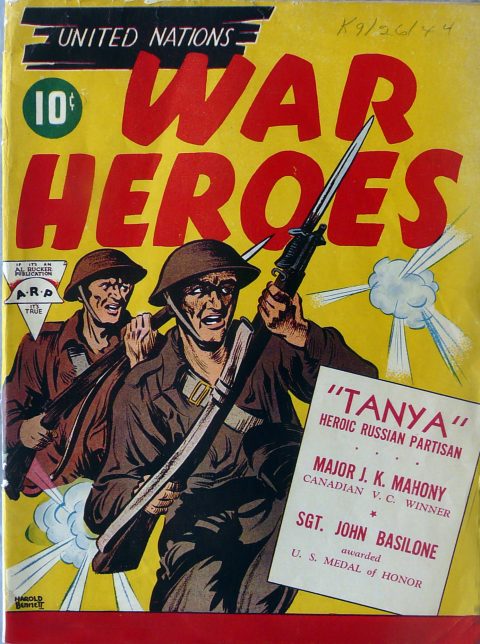 When it comes to pulp covers, Bennett was perhaps the most prolific of the lot. In a fanzine article in The Pulpster No. 17 (July-Aug. 2008) entitled “The Pulp Era in Canada: 1941-1943,” John Hilkert called (I think affectionately) Bennett “…one of Canada’s real ‘hack’ illustrators of the period.”

Bennett’s first pulp work was probably for the May 1941 issue of Daring Detective (Ever-Ready Publishers, Toronto). It was signed “Del’Orah” (Harold spelled backwards) and consisted of a simple red and black line cover.

Bennett followed with a succession of pulp covers that could easily rival those below the border. He covered the tough gangster genre…

The costumed hero and science fiction…

Bennett also used the pseudonym “Walter Leslie” starting with the four successive issues of Uncanny Tales after the Ted Steele May 1941 cover. Here are a couple of examples:

Harold Bennett should not be confused with Harry R. Bennett who was well-known for his painted gothic-style paperback covers in the U. S. from the late 1950s onward.

Friend and contemporary pulp artist of Harold Bennett was John Hilkert. Right, the same John Hilkert who created Canada’s second female superhero, The Wing, in Joke Comics No. 4 (c. Oct.-Nov. 1942), though in the by-line for that story he changed his middle initial to a “G.” instead of his proper “K.” for Kenneth.

Hilkert also did one signed cover, Wow Comics No. 7, for Bell Features, though you’d be pressed to locate the signature.

Hilkert’s first pulp cover was for C. K. Publishing Co.’s one-shot Eerie Tales that came out in July 1941.  It was a cover he was very disappointed in (partly because of the poor engraving) and has called it an “abomination.”

Here is a quote from Hilkert’s Pulpster No. 17 article that describes what happened next:

“For a period of time I became affiliated with Superior Magazines where I worked with Harold Bennett. Together we produced all the covers for their detective, Western, confessions, and science fiction publications. Among some of the titles I did cover work for… were Sure-Fire Detective, National Sports, and an oversized 8 ½- by 11-inch effort called, quite simply, Science Fiction.”

Here are a couple of examples of his Science Fiction covers:

Toward the end of 1942, American Ace Magazines began printing their pulps in Toronto, and they asked Hilkert to redraw their American covers done by Norm Saunders, keeping as much of Saunders’ style as possible. Most of you will remember Saunders best by his work on the Mars Attacks and painted Batman cards of the ‘60s. Here are a couple of examples of Hilkert’s redrawn Canadian covers for Ace Magazines:

Hilkert was originally born in Cleveland and, after Pearl Harbor brought the U.S. into the war at the end of 1941, he eventually faced the American draft call early in 1943 and returned to the States with his wife, four children, and mother in tow and enlisted on June 30. Hilkert actually served as one of the court illustrators at the Nuremberg trials after the war was over.

While at Bell Features in the latter half of 1942, Hilkert made an acquaintance with Hamiltonian Edmond Good who drew feature character Rex Baxter in Dime Comics.

Edmond Good’s first pulp cover for the February 1942 issue of Thrilling Detective coincided with the release of his first comic book work in Dime Comics No. 1.

Here are Good’s original painting and published cover for the April 1942 issue of Thrilling Detective:

The next month Good had science fantasy Weird Tales cover out. This would be about the time of Dime Comics No. 4, and also the time that Adrian Dingle was hired by Cy Bell.

Good then did covers for a few Canadian versions of the pulp Short Stories.

Good left Canada with his family early in 1944 for work in the States. The extent of his work in Canadian pulps is unclear.

Another Bell Features artist who became somewhat involved in the WWII Canadian pulp scene was Mickey Owens. Owens’ work at Bell consisted of one-page gag cartoons. Here’s one of his typical gag pages from Dime Comics No. 9.

Owens did do a couple of full stories for Rucker’s United Nations Battle/War Heroes (1945). Here are the splashes:

Owens’ style was suited to the racy digest-sized gag pulps of the time such as The Colonel:

All the above artists worked for Bell Features and were based in and around Toronto. The remaining WECA comic artist who did some pulp work was George Menendez Rae, who was based in Montreal and worked for Educational Projects. His best work (and, in my opinion, some of the best artwork from the Canadian war time period) was on his RCMP and Canada Jack series in Canadian Heroes Comics. I can only find reference to two pulp covers that Rae did are an issue of Uncanny Tales and an issue of  Dynamic Western: