CanJoeCon is the event that all of us Joe-Lovin’ Canucks wait for every year.  It is the opportunity for all of us to hang out and talk about G.I. Joe.  It is nice to have an event where we can gather as a community.

The convention show floor was in a huge ballroom at the Sheraton.  There were lots of dealers set up selling everything under the sun.  And not just G.I. Joe products: there was every type of action figure imaginable.  I even grabbed a Marvel Universe Beta Ray Bill figure that hasn’t hit retail in Canada yet.  I was pretty excited to have that in my hands. 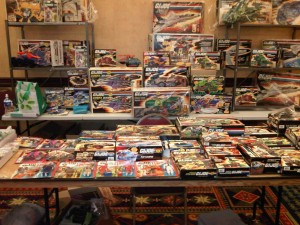 One of the first stops I made was at the Hasbro Canada booth.  I talked to them about the delay of G.I. Joe Retaliation until March of 2013.  They told me that the delay of the movie for the addition of 3D and extra scenes is exciting and the movie will be a huge hit.  I expected that to be the answer.  Paramount and Hasbro have said all along that the delay will make a better movie.  I think the decision was a bad idea and has hurt the G.I. Joe brand.  But I still can’t wait to see the new movie next year.

Hasbro Canada asked me some questions while I was at their booth.  They asked me if I am an avid collector, and if I keep the figures in package or take them out.  I told them that all of my figures come out of package and get displayed on the shelf.  Hasbro asked me if I am a collector who would buy two figures, one to keep in package and one to display.  I told them that buying the figure once is enough.  I didn’t need multiples (unless it’s a generic trooper).

I then got into a discussion with Hasbro Canada on some ideas to get kids more interested in action figures.  They said there are several things they are working on and wondered about my input.  I told them that every figure should come with a digital code.  With their parents assistance, the kid could go online and get a mission from the G.I. Joe website.  The mission log would have a list of what equipment and characters were needed to complete the mission.  For example if the kid had a Roadblock figure and went online, the mission log could say that Roadblock needed Snake Eyes, Flint and an Awe Striker to complete the mission.  I think that if the kid didn’t have Flint, they would think they couldn’t complete the mission without him.  Then they would have to go to the store and purchase the other characters and gear to complete the mission.  It could lead to future sales of other figures.  Hasbro Canada asked me if that is something I would be interested in as a collector.  I told them that I am a guaranteed customer.  If they release it, I’m going to buy it.  But with the ways kids play these days, they need more interaction and stimulus than we needed when we played with toys back when we were kids. 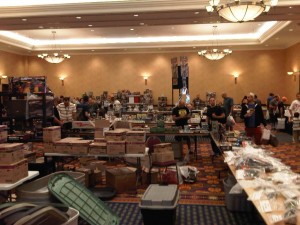 During the day of CanJoeCon I attended two panels.  One was the Secrets of G.I. Joe which was presented by JoeDeclassified.com.  The other was with artist Robert Atkins.  After the panel I had the opportunity to stop by Robert’s table.  I looked through his portfolio and his artwork is amazing.  I am used to seeing his art in the pages of G.I. Joe, so I guess I take it for granted.  He had a print of Rocketeer that I thought was awesome.  You can visit his website where he has posted some of his commissions he had done at CanJoeCon.

Another person I had a great conversation with at CanJoeCon was James Kavanaugh Jr.  He is the author of R.A.H.C. A Guide to Second Generation O-Ring G.I. Joe Action Figures which catalogs and focuses on G.I. Joe from 1997 to 2007.  This book will work in conjunction with Mark Bellomo’s book Ultimate Guide to G.I. Joe 1982-1994: Identification and Price Guide.  I got a copy of Mark’s book from him last year, and I knew I wanted James’ book this year.  I am glad I got his book, but more than that James is just a great guy to talk to.  We chatted about everything from G.I. Joe to business to world issues.  James also knows his stuff when it comes to G.I. Joe.  He beat us all at the G.I. Joe trivia contest.  He only got 4 answers wrong (I scored a dismal 74%, I quoted the percentage so I don’t have to tell you how many I got wrong).

If you are thinking about getting into collecting G.I. Joe, or you’ve pulled your collection out of the closet and don’t know what you have, GET THESE BOOKS.  They are a valuable resource for figuring out what you have in your collection.  Even though I’ve been collecting for almost 30 years, I still find myself flipping through these books to figure stuff out.  Yes you can hit the internet, but Mark and James’ insight on G.I. Joe is worth it to buy these books. 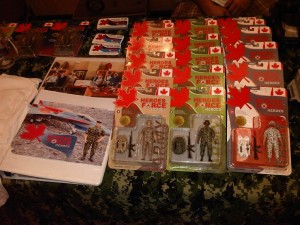 Another success story at this year’s CanJoeCon was Heroes Force.  Heroes Force is the first Canadian Soldiers Action Figures collection.  It was designed and created by Shannon Thibodeau (Canadian Forces Member), an Aircraft Structures (ACS) Metal fabricator Instructor from CFSATE, 16 WING Borden, Ontario.  6,000 action figures were released to limited retail in 2011.  All of those figures sold out very quickly and $1.00 from each figure sold was donated to the Soldier On Fund, which helps out injured and fallen soldiers  families.

When I talked to Shannon he told me he was surprised how quickly the first wave sold.  Wave 2 is now available for retail and they differ from wave 1.  Now the figures have accessories, which was a new challenge for Shannon’s production team.  The figures are highly sought after and very popular.  The first wave of figures were designed after real Canadian soldiers.  Shannon Thibodeau being one of them.

This was the first time I had the opportunity to talk to Shannon in years.  We met in 2009 while in line at the movies to see Rise of Cobra.  I was wearing a G.I. Joe t shirt and he asked if I was a collector.  We traded collecting stories and swapped phone numbers, and kept in touch.  I still have an email from a couple of years ago when he first told me of his idea for Heroes Force.  I am glad he has seen success with his toyline, and I can’t wait to see what is in store for wave 3. 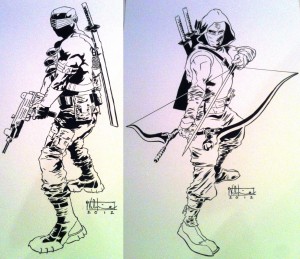 The other special guest that I had a lot of fun talking to was Valentine DeLandro.  Valentine is the first comic book creator I met, since I started writing for Comic Book Daily.  He is one of the nicest people I have ever met, and we have become friends.  It was fun just hanging out and talking to him all day.  He was selling some prints of Snake Eyes and Storm Shadow.  He was also selling pages from some of the comics he worked on.  Last year I purchased a page from G.I. Joe Declassified #3 from him.  It is one of my favourite pieces of art in my collection.  Valentine will be at Fan Expo this year.  Swing by his booth and say hi.  He is one of the nicest guys in the business. 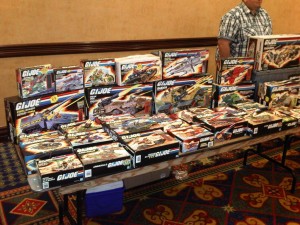 This year’s Canadian G.I. Joe Convention was a lot of fun.  But there were a couple of things that loomed over the show.  One was the cancellation of the movie.  It disappointed a lot of G.I. Joe fans.  Hopefully the movie is a big success and there will be a lot of buzz for next year’s CanJoeCon.

The other thing that loomed over the show was the attendance.  It felt like there were less people there than last year.  When I show up at a CanJoeCon, usually there are people lined up out the doors, waiting to get in.  That didn’t happen this year.  When I showed up at the show, there wasn’t a crowd waiting to get in.  When I got to the registration desk, there wasn’t a line up either.  It was odd that there was less crowd.

Many factors could contribute to this.  First off was the weather.  It was raining early on Saturday morning, and the forecast didn’t look any better for the rest of the day.  The weather could have driven people away.  Another factor was the date of the show.  CanJoeCon was in August this year.  Last year it was in July.  With a show in the middle of August this year, it was competing with TFCon (Transformers Convention) that was two weeks earlier, and Fan Expo which is two weekends away.  With similar events happening, there is only so much time and money to go to them all.  I think CanJoeCon can draw more people having a show earlier in the summer.  June or early July would be a good time for CanJoeCon.

Canadian G.I. Joe Convention isn’t just a G.I. Joe show, it is a toy show as well.  Yes, the dealers are selling G.I. Joe toys, but they are selling toys for every taste and genre.  Plus when you have the opportunity to talk to the special guests, they are very approachable and friendly.  Keep that in mind when you are planning your conventions and expos tours next summer.

The organizers of the show put a lot of hard work into the show every year.  And all of us Joe Canuck’s are very grateful for the work they do.  I know I can’t wait until the 2013 Canadian G.I. Joe Convention.

(photos by author, other than noted)