2014 is a big year for G.I. Joe.  The franchise celebrates its 50th anniversary.  The first G.I. Joe figure appeared on store shelves in 1964 and was the toy that put Hasbro toys on the map.  During its 50 year history it has gone through many changes and incarnations.  It started off being a “war” toy, which changed size and shape in the 70’s and became an adventure toy.  Finally in the 80’s it was relaunched into it’s most popular version (and the version us from the last couple generations are more familiar with) the 3-3/4″ “fully poseable modern army figure”.

But last week sad news was released in regards to G.I. Joe (especially for Canadians): the Canadian G.I. Joe Convention is officially retired.  After 10 years, it is done.

The last Canadian G.I. Joe Convention (CanJoeCon) was held in 2012.  Unfortunately there were some factors working against CanJoeCon which prevented it from being held in 2013.  The “Convention Exclusive Toy Set” helps fund the show.  The sets pay for the venue, advertising, special guests and other things that help put on the convention.  At one time Hasbro was able to help out CanJoeCon with supplying product to make the Con Sets, but in 2013 with the mismanagement of G.I. Joe Retaliation (and its eventual delay) there just wasn’t any figures available for CanJoeCon.

And according to Canadian JoeCon’s Facebook post (link above), it looks like Hasbro is unable/unwilling to help out CanJoeCon this year, which was one of the final nails in the coffin for the convention.

CanJoeCon began in 2002 in the basement of Bounty Hunter Toys in Hamilton and was an intimate gathering of G.I. Joe fans.  Over its 10 year history it grew into a full-fledged convention and moved from Hamilton to Toronto, and gained international notoriety.  The convention special guests have been some of the most influential people in the history of G.I. Joe.  Larry Hama (comics writer), Ron Rudat (Hasbro toy designer), Valentine DeLandro (artist),  Robert Atkins (artist), Zach Hoffman (voice actor), and Mark Bellomo were some of the guests to attend the show during its history. 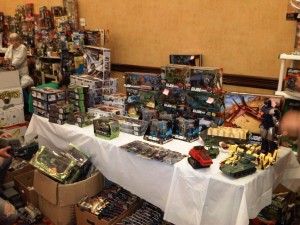 For me, CanJoeCon was my favourite convention.  I have loved G.I. Joe for most of my life.  There was something amazing about attending a show where everyone else there loved G.I. Joe just as much as I did.  I had so much fun talking to people about their collections, or what was their favourite toy from the line.  Since G.I. Joe has changed so many times over its 50 year history, everybody liked something different.  Some people only collected the toys from 1982 to 1987, other people liked the “Neon Mega Marines” from the mid 90’s.  Their stories and their passion made CanJoeCon an event I haven’t experienced at another show since.

I used the word “Decommissioned” in the title for this column, and I think that is the best term to describe what has happened to CanJoeCon.  Sure CanJoeCon is done, but someday in the future, when the time is right I can see it coming back.  I know the organizers love the show, and it pains them to decommission it, but if it does come back someday it will bigger and better than ever.