In a previous edition of this column I talked about customizing action figures.  In the comments section, a reader asked “How do I customize an action figure?”

This is a tough question to answer, without having any specific details.  Scott (our trusty EiC) replied to the question with the suggestion that I dedicate a column to customization.  I thought I would take it one step farther.  I will give you a step by step instruction on how to make an easy custom (sometimes called an LBC or Lazy Boy Custom).  If you follow these steps you should be able to make this figure within 30 minutes.

Step One:  Pick your character 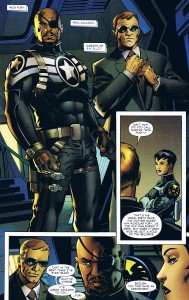 Ta-da!!! Nick Fury Jr. himself (aka Marcus Johnson).  I love the look of the character.  And with being an LBC custom, most of the work is done for you.

Since this is an “LBC” custom, most of the work has been done for me.  The Commander Rogers Marvel Universe figure is the perfect base for Marcus Johnson/Nick Fury Jr.  The Avengers Nick Fury/Samuel L. Jackson head is perfect as well.

The unthinkable happened when I started the next step.  Commander Rogers arm broke off.  This will happen from time to time.  Newer figures have multiple joints and at times the joints will be very stiff.  While I was loosening up the joints on the figure to make sure there wouldn’t be any problems, his arm broke off.  At first I got upset, but then I realized that this may happen to you.  So I will show you how to fix this quite easily. 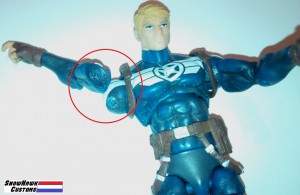 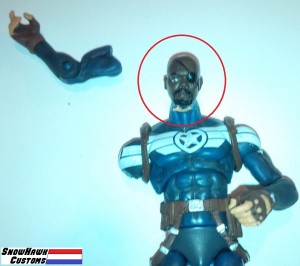 The heads of newer figures are very easy to remove.  With a little bit of pressure they will pop right off the ball socket.  I placed the Nick Fury head on the Steve Rogers body and it didn’t look right.  Some figures have different neck dimensions, so not every head will fit every body perfectly.  This is easy to fix.  Using a Dremel Tool, drill out the ball socket inside the figure’s head.  There is a lot of plastic in the head, so you can drill in fairly deep to make more space for the neck joint.  You can shave a bit of the plastic off of the back of the neck on the figure’s body.  This will allow the head to sit farther down on the neck joint so your figure looks more natural. 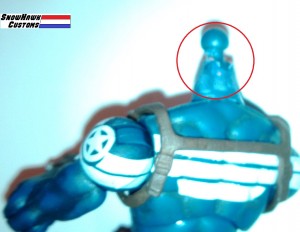 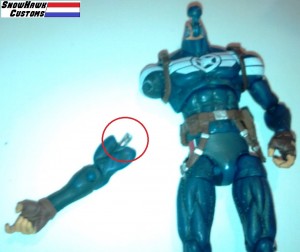 Using my trusty Dremel Tool again, I drilled out the spot where the arm post “used” to be on the shoulder joint.  After that I drilled out the socket on the bicep.  I found a piece of aluminum wire that was the right size for the holes that I drilled.  You don’t have to use aluminum wire.  You can use any material you would like.  I chose aluminum because it is easy to cut.  It will not corrode, and it is smooth enough that arm will still move on the wire.  This figure isn’t meant for rigorous play, but I still want it to be poseable. 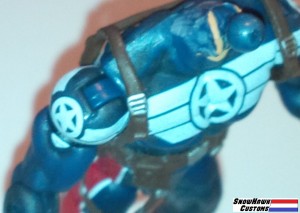 You may have to do a little bit of modifying to the wire that you have inserted in your arm.  You want the arm to look natural so you may have to cut or shape the wire a bit, for it to look good.  I applied some super glue to the shoulder joint, and inserted the arm.  I didn’t glue the wire into bicep piece (you may want to).  I decided against it, because I want some mobility for the arm.  And with the extra mobility it will make it easier posing the figure in the future. 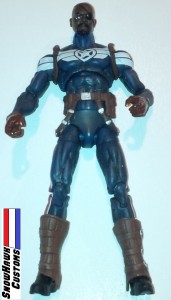 As you can see the figure is assembled.  The head fits the body properly, and it’s newly repaired arm looks better too.  All that is left to do is touch-up.

The hands that came with Commander Rogers will not work for our Nick Fury Jr.  Using a bit of brown touch up paint, paint the gloves one solid colour.  I used a gloss brown paint for my touch up, which looking at it now, doesn’t match the other brown colours on the figure.  I will repaint them a flat brown in the future. 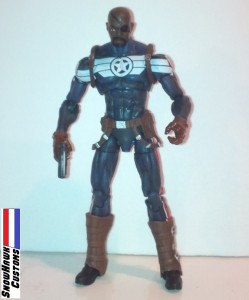 So here is the final step.  Get your figure geared up and get him into the action!!!

I decided on a simple pistol for Nick Fury Jr.  I could have loaded him up with machine guns, but it didn’t feel right for this character.

Now your figure is ready for display on your shelf, or ready to be posed for photographs in your favourite diorama.

If you found this column useful, please let me know in the comments section below, and I will do more custom figures in the future for you.