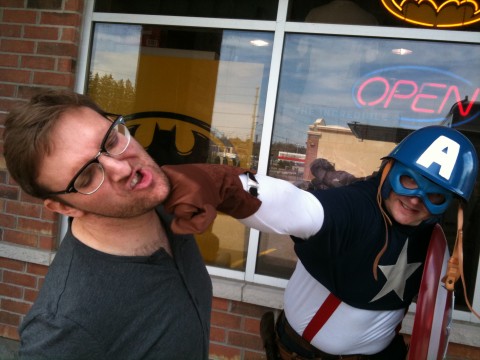 If you’ve read all of my columns on Comic Book Daily, and all of my comments I’ve ever written, you may have read that I was working on a Captain America costume for this past Halloween.

I did make my Captain America costume, and I showed up to a Halloween party as the Sentinel of Liberty.

I tried to make my costume realistic for World War II.  I made countless trips to army surplus stores and flea markets to find everything I needed.

Captain America: The First Avenger was a big inspiration on my costume.  Especially the action figures for the movie.  I tried to replicate the design and colour scheme for my costume.

This all leads up to the recent Free Comic Book Day.  I was asked by my local comic book shop, Big B in Barrie, if I would show up as Captain America.  At first I was leery about saying yes.  I contemplated backing out many times.  When I showed up at Big B the Wednesday before FCBD, I was asked again if I was going to show up as Captain America.  My answer was “If you want me, you got me!”

That is when fear set in.

I am not a Cos-Player.  I appreciate the work that goes into the costumes, but I am not interested in getting dressed up in costume for a comic convention or expo.  I think it is cool, but it was never something I was interested in.  I guess I am too shy when it comes to costumes.

So with a great amount of fear I got my costume together the Thursday night before FCBD.  When it was all pieced out, there was something missing.  I wanted to make sure my face was covered.

At Halloween I stitched together a mask but I never wore it.  The party was at a bar.  It was dark.  Everyone was wearing a costume, so I didn’t worry about getting recognized.

FCBD was a different story.

After a short nights sleep, I woke up Saturday for Free Comic Book Day.

I got my kids ready to go to the comic book shop, then packed up my helmet, holster, mask and shield and headed off to Big B.

After arriving at the store, and a quick costume change in the washroom I was ready to meet the public.  For the very first time… as Captain America.

Then this kid came up to me just because he wanted to say hi to Captain America.  Then it dawned on me.  People weren’t there to see Ed Campbell dressed in a costume.  They wanted to see Captain America, the Sentinel of Liberty.  When I came to that realization, I moved from the corner where I was hiding and I stood in the middle of the floor saying Hi to people and shaking hands.

It was exciting.  There were even a couple of times I was asked to pose with people to have their pictures taken.  I couldn’t believe it.  People actually went out of their way to have a picture with Cap.  I’ve seen it all the time before at toy shows and expos.  But it is usually with some hot girl dressed up in an even hotter costume, or with someone with a really wicked costume.  My costume was thrown together in my basement, with my limited sewing skill.  It made me feel good that people recognized my costume and said it was done well.

Eventually the crowd started to thin out, and the thrill of Captain America was starting to fade.  I took that opportunity to slip out and change back into my street clothes and enjoy the rest of FCBD with my family.

I had a blast being Captain America for a day.  I don’t know if I’ll don the costume again for a comic convention or Fan Expo.  But it is in the back of my mind to try it.

What I learned from my experience is fear is the only thing stopping you.  I don’t consider myself a fearful person.  I can be shy at times, but at other times (a lot of them actually) I have stood in front of  a huge audience as an announcer or a master of ceremonies.  I guess I have done that so many times, I don’t think of it anymore.  I just get up there and do it.  Dressing up as Captain America was scary.  But the look on the kids eyes, and the people who wanted their pictures taken with me was worth it.  And who knows… someday I may wear the stars and stripes again and appear at a function near you.

A huge thank you to Ryan Parent for the photo, and Pete DeCourcy for taking a beating at the hands of Captain America.