On July 7th, Big B Comics Barrie was the final stop on the Captain Canuck tour.  Richard Comely was on hand to sign autographs, draw free sketches and have a conversation with.

Also on hand was Captain Canuck in person, but more on that later. 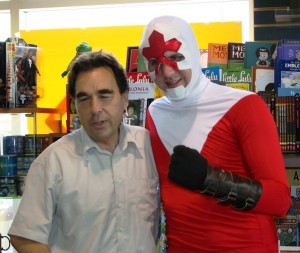 I packed up the family and headed into Big B.  As soon as I walked in the door, I saw Richard at the signing table.  He was working on a sketch and there wasn’t a line.  I took the opportunity to introduce myself to him.  I told him that I was a writer for Comic Book Daily, and also a regular Big B customer.

Richard is a very kind and very easy to talk to.  He asked me where I’m from, and he talked to my kids.  His table was set up in the part of the store where my kids like to sit and read their comics.  I thought they would have been in his way, but he talked to them and asked them what they were reading.  My kids really enjoyed talking to him.  Richard told me he has 8 children, so obviously he is good with children and he told me “to cherish my time with them at this age, because it goes quick”.  Great advice indeed.

The title of this article is I Could’ve Been Captain Canuck, and there is a story behind that.

All I could think was… What?!?

Big B didn’t have anyone to dress up as Cap for Captain Canuck day.  The costume was going to be supplied for me, all I had to do was show up, get geared up and greet the crowd.  I wanted to think it over for the night and I would give them an answer in the morning.

After some time reflecting on it, I thought it would be fun.

I have described my first experience with cosplay in my article “I am Captain America“.  I thought this would be a great opportunity, especially with the creator of Captain Canuck being there as well.

I was excited for Captain Canuck day.  Then I got the bad news, by text.  I read the text from Mr. Blue (Big B employee) that the costume was too small for me.  I wouldn’t be able to fit into it.

The costume was a spandex type material.  Now I’m a big guy.  I’m 6’2″ and 200-something-ish pounds.  Apparently the costume was designed for someone who is 5’9”.  Spandex will stretch, but not that much.

So with some disappointment I accepted the fact that I wouldn’t be Captain Canuck.

It was to my surprise when I showed up at Big B, and they found a replacement for Captain Canuck, and the guy was taller than me.  I guess the costume does stretch. 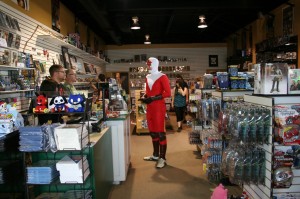 After talking to the other Big B customers we came to the consensus that Captain Canuck is an under-utilized property.  There is so much potential behind the character.  With the continued success of comic book properties, especially on the big screen.  Captain Canuck could be the next big thing.  The toughest hurdle would be success and recognition in the American market.

I see exciting things ahead for Captain Canuck, and hopefully I will get the opportunity to be Captain Canuck sometime in the future.