This past weekend I was at the Canadian Collectible Toy Expo.  I collect G.I. Joe and other action figures that I find interesting.  I try to make it to two or three shows a year.  These shows are great to find some great deals on new and previously played with figures.  But like a garage sale, you do need to know what something is worth to get a great deal. 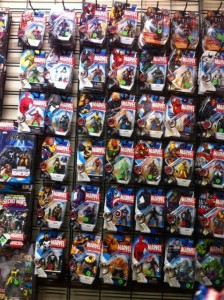 The toy show was at the Burlington Holiday Inn.  I have been at three toy shows here before.  There is lots of free parking, which is a definite bonus (more money to spend).  The Inn also has two large conference rooms, which means lots of space for dealers.  The other benefit to that area is there is a restaurant in the Inn, plus Boston Pizza and Jack Astor’s are a block away.  I find I have more patience looking for deals on a full stomach.

The organizers for this show do an amazing job.  When we (my wife and I) showed up, the first thing we did was to fill in a ballot for a door prize.  Then we paid our admission.  The whole process took two minutes.  I have been at other toy shows where registration and admission took upwards of thirty minutes.  That is a long time to wait in line, when you start thinking of all the toys that are available for sale.  Regular admission to the show is $10, which is reasonable.  For an extra $10 you could get the early bird admission, and gain access to the show one hour early to get the good stuff first (if I was early this year, I could have picked up an A-Team movie van for $40).  I like to show up later to the show, there are distinct advantages to it.

This year’s show was dominated by Star Wars, Transformers, Marvel Universe, and wrestling memorabilia (even wrestling legend Smith Hart was there signing 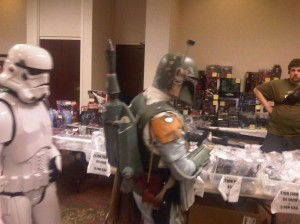 autographs).  You could get previously played Teenage Mutant Ninja Turtles, He-Man and of course G.I. Joe (which in my opinion was priced too high, $8 for a figure with no weapons, come on you gotta be kidding me).  There was a lot of Thor, Iron Man, Captain America and Green Lantern memorabilia this year, which is expected with the new movies coming out this summer. My wife even picked up a Green Lantern tee-shirt for $10 (yup that’s right, my wife is cool).

What did I buy this year you ask?  There was not much at the show this year that I wanted. I mainly collect G.I. Joe, and the next wave of figures are not out until May, so there weren’t new Joes at the show, but I did find some stuff. I bought a bunch of Joes for $1 to $5 each, a Marvel Universe Bucky for $10, and a San Diego Comic Con Captain America for $21. I had to do a lot of haggling to get it at that price since the going rate at the show was $25. But after haggling back and forth and making offers and counter offers we agreed on $21. 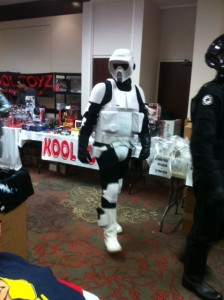 A great attraction at the toy show was the 501st Legion, they are usually at conventions and toy shows around the area.  Darth Vader, Boba Fett, Jango Fett and a bunch of troopers were there.  Kids (and adults) were excited to see them, and they are quite accommodating to get their pictures taken with fans.

This show was great for the kids.  It was very kid friendly.  There were kids everywhere (some even dressed up in costumes).  Most vendors like to see the kids out at the show.   Some even give discounts to kids.   I saw one knock a couple buck off an action figure for a kid.  This is a great idea, give a deal to the kids who have saved their money, make collectors of them now.

So if you are new going to a toy show, here are some of my tips. 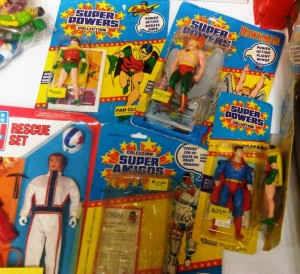 If you collect Super-Hero action figures, a toy show is a great place to get some deals.  Especially if you don’t care if the figures are a bit older.  I saw some of the Watchmen figures there, instead of $20 (which I paid for a Silk Spectre a couple of years ago) you could pick them up for $5.

Prices at shows are flexible.  Depending on availability and demand the price will change.  I was at one show where the 25th Anniversary Sgt. Slaughter figure was selling for $30.  When the vendor noticed that he was the only person who had that figure available, the price increased to $45.  Try to have an idea what something is worth before you go. 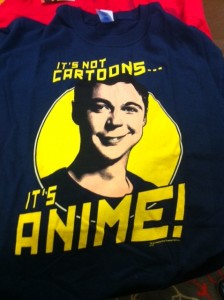 If you don’t mind paying the extra admission, go early, and get what you want first.

Many vendors are open to offers.  It takes some haggling, but most times you can get everything for a better price.  Also, be willing to walk away, if you don’t get your price.

I like to show up at lunch time: most people head out to get a bite to eat, so there is more space to browse.  After lunch people start to leave and vendors start to pack up.  I’ve picked up my best deals at the end of the day: the vendor is more open to negotiations, and you can get an amazing deal, so they don’t have to pack it up to take home.

This was a fun show.  It was also a relaxing show for me as well, since I was not desperate to get anything in particular.  You can easily browse the internet to find out when the next toy show will be in your area.  So get out there, grab some great toys, get some deals and have fun. 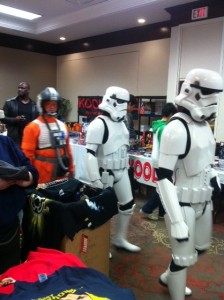 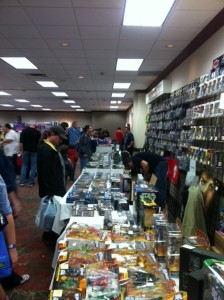 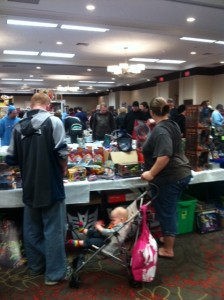 This weekend I will be at Fan Appreciation ComicCon at Toronto’s Metro Convention Center.  I will be at the Comic Book Daily booth on Saturday.  Make sure you swing by the booth to say hello to the CBD gang. 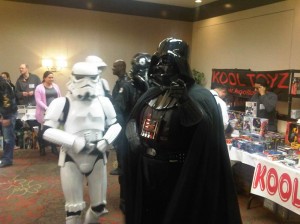