We have been living in the age of Marvel Now! for almost two years now.  On the whole, Marvel Now! has been pretty successful.  There have been some great books come out under the Marvel Now! banner.  Most notably those have been Thor: God of Thunder, Indestructible Hulk, and Iron Man.  These titles have changed the status-quo for the characters, and have been very entertaining comic books. 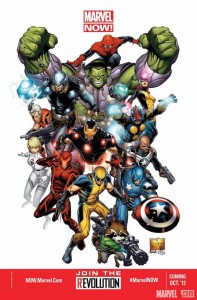 “Wave 1” of Marvel Now! led to “Wave 2″which included Superior Spider-Man Team Up, Superior Foes of Spider-Man and Mighty Avengers.  Which it is still too early to tell if these are successes or merely forgettable comic books.

But get ready for All New Marvel Now!  The third wave.  Some of the titles included are All New Captain America, All New Ghost Rider and All New X-Factor.  Also we are getting the Marvel Now! treatment to Punisher, Black Widow, Captain Marvel (which was already a pre-Marvel Now! title), Silver Surfer and Loki: Agent of Asgard.

This “All-New” treatment is going to get the “Same-Old” debate, why use gimmicks to sell comics?

Does slapping an “All New” tag on a title entice people to throw money at a title they weren’t buying before?

How long before “embossed hologram covers with lights and sounds”?

I really bought in to Marvel Now!  There were some great comics coming out during this new “re-imagining” of comics.  Marvel Now! wasn’t just a kitschy catchphrase.  It was a new philosophy (which should have been the core of producing comics).  Telling riveting stories with amazing artwork.  It’s not that hard to figure out, but it is easy to stray from that basic principle.

It’s not like we’re reading the same stuff week after week (even though some writers make it feel that way).  “All-New” is just a gimmick, and not a very innovative one at that.  I can understand why Marvel is doing it.  They have to increase sales some how, but I just wish it didn’t feel like they were using tactics from the “Used Car Salesman Handbook”.

Also… when does “All-New” become the “Same-Old”?

Eventually using the tagline gets old.  Will “All New Captain America” or “All New X-Factor” still be called “All New” a year from now?

“All New X-men” was clever for what the comic is.  The original X-Men come to the future/present Marvel Universe.  They haven’t developed their powers yet.  They haven’t experienced what the current X-Men have in their lifetimes, so essentially these X-Men are new.  All new, in fact.

What’s their next gimmick?