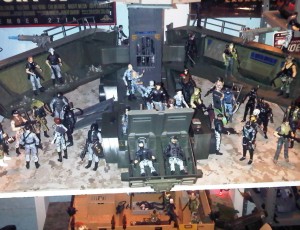 I collect stuff.  A lot of stuff.  Between my comic books, action figures, DVDs, CDs and video games.  I have a lot of stuff.

Having this much stuff doesn’t lead to every day being a “shiny happy day”.  There are always little things that go along with collecting that peeve you off.  Sometimes they downright piss you off. 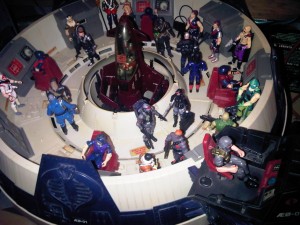 One of my major pet peeves of collecting is dusting.  It is a chore I hate when it comes to collecting.  And there is nothing you can do about it.  It is a major inconvenience when it comes to action figures.  Even if you have a nice glass display case, you are still going to have dust on your shelves and on your figures.  I guess if I kept all my figures in the original packages, it would make dusting easier, but where is the fun in that.

My G.I. Joe collection consists of 975 figures and 180 vehicles.  That is a lot of dusting.  All of my figures are out on display on shelves.  With so many figures and vehicles sitting there I have to take everything down, dust it, them put it back (and sometimes change the display a little).  This is a big project.  Right now I am almost finished dusting my collection, which I started last March.  So just cleaning when I can find the time, it will take me almost a complete year to dust and clean my collection.  By the time I finish, I will have start over again.

It has been suggested to me that I sell a part of my collection to make the dusting job easier.  But I can’t.  I have sold some of my DVDs, CDs and comics.  Those are easy to sell.  I have a hard time selling my action figures because I can remember when I bought the majority of my figures.  Every one has a story attached to it.  That may be why it’s so hard for some people to part with their collections. 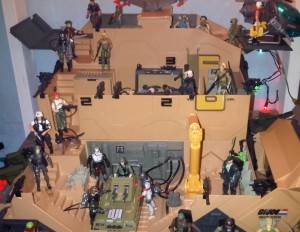 Another pet peeve I have is buying toys in Canada.  When it comes to toys, Canadian toy collectors are getting the short end of the pogo stick.  Many of us hardcore toy collectors belong to forums so we can talk about toys.  On many forums there is a “sightings” thread.  Which is a thread where collector’s can post where certain toys are being found.  Some forums include members all over North America.  It is disheartening to find out that toys or action figures we are desperate to have here in our retails stores, are sitting on the shelves in the United States.  And many times (if at all) it could take a couple of months for them to finally wind up on our Canadian toy shelves.

I wish the system was more fair.  I understand that the US has a larger consumer base than Canada.  But why can’t toys be released here the same time as in the States?

Another thing that peeves me off is the over-saturation of crappy characters being released as action figures.  Hey Hasbro!  We get it.  Bumblebee and Snake Eyes are popular for Transformers and G.I. Joe, but we don’t have to have one released with every wave of toys.  Can we just have one wave with out BB or SE?  I’m getting tired of it.

Do you know how many Snake Eyes I have in my G.I. Joe collection?

34.  And that’s not even all of them.  There are 62 different versions of Snake Eyes.  Yes he is a bad-ass ninja.  But do we really need that many? 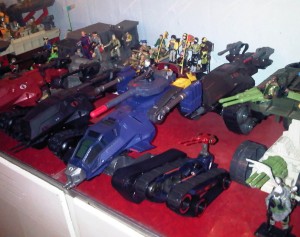 My list could go on and on, but my final pet peeve (which pretty much pisses me right off) is TOY SWAPPING D-BAGS!!!

I’ve talked about this before, but it is a point worth noting again.

You may not realize but there are people out there who are stealing toys from retail stores.  Some are buying the toys, changing the action figure or toy to an inferior product, resealing the package, then returning it to the store to get their money back.  I’ve seen this happen many times.  I’ve seen a WWE Jake The Snake Roberts replaced by a budget Triple H figure.  I’ve also seen Marvel figures replaced with dollar store action figures.

Some people are even brazen enough to steal the figures right out of the package, and leave the empty blister pack sitting on the shelf.  During Christmas my local Walmart had an empty Avengers Nick Fury package sitting on the shelf.  My wife has also seen a Monster High doll with a missing torso and thigh in the package at the same store.  It’s hard to believe that someone would have the gall to steal a doll’s body part right in the toy aisle.

This is bad news for us collectors.  Because I believe it isn’t kids who are doing this.  It is adult collectors like us.  When these TSDB’s (Toy Swapping D-Bags) do this, it makes us all look bad.  We, the good collectors, get lumped in with them, the bad collectors.

It’s an aggravation and it really peeve’s me off.  And the trend is getting worse.  I have been seeing more and more of it.  When times are tough and people are still wanting their toys, they are willing to do whatever they can to get them.  But if you have to resort to stealing to continue your hobby, I think it’s time to give up.  It’s not worth it.

These pet peeves are only a small cross section of things that can tick off a collector.  I know there are many more out there.  If you are a new collector, just keep in mind that this hobby is fun, but some days there will be little things that will get you down.  But in the end the collection is worth it.