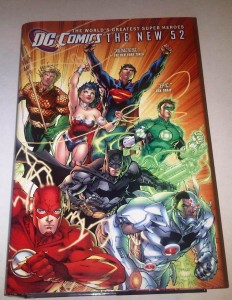 Last year Scott reported about the release of the DC New 52 Hardcover book.  There was some discussion about the book in the comments section of the article.  I made the comment that I would buy that book, and further down in the comments Scott said “Talk is cheap but money buys the beer: are you going to actually buy it when released in December?”

And the answer is… Yes, I did buy the New DC 52 Hardcover.

First off, under any normal circumstances I wouldn’t have bought this book.  Looking at it now (9 issues into the New 52) the book is just a snapshot in time, not an ongoing anthology.  Many of the New 52 titles have been cancelled, and in my mind it was tough reading those #1’s, because what was the point.  They were titles that I wouldn’t follow, so why bother, but more on that later.

The other reason the circumstances were not normal for the purchase of this massive collection was timing.  I did say I was going to buy the book, and I really did want to buy it, but the cost was too much.  The $150 USD cover price is a lot of money to sink into a comic book.  But at the time of purchase, I just got my tax return money and a portion of it was burning a hole in my pocket to buy this book.

To save money on the purchase, I ended up buying it from Amazon.  I would have loved to buy it from my local comic book shop, but I was able to save $40 going the internet route.  A side note here: I have more than made up for it at the comic book shop because I just bought a bunch of trades over the last couple of weeks.

So there you have it.  I did buy the 52 Hardcover, but I just had to justify it to myself rationally of why someone would spend $150 on the book.  I couldn’t do it.  I think the price I paid, which ended up being $110 before tax, was justified.  But not everybody will rush out to buy the DC New 52 Hardcover, only the ones foolish to spend that much money.

Now that’s out of the way, lets talk about the good stuff.

This hardcover book is beautiful.  The shear size of it is impressive alone, but the presentation is done very well.  The hardcover has a great slip cover on it (sorry Slip-Cover-haters) and I was very surprised when I removed it for safe keeping and saw that the cover featured the original promotion artwork for the New 52 by Jim Lee.  Unlike the other Omnibus’ that I have read (FF and Thor) the New 52 HC looks great when it is sitting on the table waiting to be read.

There is a talent to reading these huge omnibus style books.  You have to adapt your reading style so you can hold the book properly.  I prefer to sit on the old recliner with my feet up and the book in my lap.  The only problem with the New 52 HC is on some pages with dialogue balloons that are close to the book’s spine, they are impossible to read.  You need to tilt the book at an odd angle, and spread the spine open a bit to read exactly what is written.  That is my only complaint about the book.  I just wish the pages were shifted over a little bit so it was easier to read.

Each section of the hardcover is laid out in the “theme” that DC is using to release their new issues for the New 52.  There is a Superman set, a Batman set, a Justice League set and so on and so forth.  Some “chapters” or issues didn’t feel like they were put in the right place.  Personally I would have liked to have seen the Superboy issue placed with the Teen Titans or Legionaires issues.  After reading every single #1, those felt like a natural fit together.

Each issue in the book features the original cover without titles or credits.  Just a raw cover.  The page following the cover features a title page with the title logo of that particular issue.

After reading every single #1 there are many titles I wish I had read from the very start.

Some of the issues that are a “win” for me are The Savage Hawkman, The Fury of Firestorm, Mister Terrific, Batman, Detective Comics, Batman and Robin, Nightwing, Red Hood and the Outlaws, Stormwatch, Voodoo, Suicide Squad, Deathstroke, Teen Titans and Justice League International.

The ones that I considered a complete waste of my reading time were Action Comics, Superman, Green Lantern, Deadman, Red Lanterns, O.M.A.C., All Star Westerns, Static Shock and Hawk & Dove.  These issues were painful to read and I had to force myself to read them.  One of the worst in the bunch was Hawk & Dove.  It read like a book from the 90’s, and if I want to read a Rob Liefeld book that looks like the 90’s I’ll go grab X-Force #2.

There are some titles that do not read like a reboot.  The Green Lantern and Batman books feel like a continuation from the “pre-reboot” DC universe.  I enjoy the new versions of several titles like The Flash and Aquaman.  They are a fresh new read.  The only question I have about The Flash is where is Wally West?  He is The Flash I first started reading and I’d like to know where he fits in with Barry Allen back from the dead.

As I said before the DC New 52 Hardcover is a snapshot in time.  It gives us comic book fans a chance to see what was happening with the publisher during a very exciting time in comic books.  It is just a “huge cat crushing” comic book annual.  I think it would be interesting to see other publishers try this idea.  Take every issue from a single month and release it as a huge omnibus.  It’s a chance to see how different writers and artists try to make one continuity from different story lines.

The DC New 52 Hardcover is an expensive collection, but it is one I don’t regret buying.