Last week the G.I. Joe Universe was shocked by the news that G.I. Joe Retaliation, the sequel to 2009’s G.I. Joe Rise of Cobra, would be released March 29/2013 instead of its original release date of June 29/2012.  Initially the delay was for the addition of 3D to the movie, which is a riduculous reason to postpone the release of a movie for a gimmick.

Now that a week has passed more information has come forward about the delay.  After reading this, I feel better about the movie being delayed.  Essentially the movie didn’t test very well with the screener audience.  The death of Duke, played by Channing Tatum, didn’t sit well with the audience.  The movie will have scenes re-shot, re-inserting Channing Tatum into the movie.  This is a wise move because Channing Tatum has become a huge movie star since he first grabbed the gear as Duke in Rise Of Cobra.  With the addition of 3D, which is very popular in Russia and China, and more Channing Tatum, which will lead to more of a “date friendly” movie (apparently the ladies love Channing).  G.I. Joe will be retooled to be a better movie, and hopefully not sink at the box office like this summer’s Battleship.

May 28th was supposed to be the street date for the new G.I. Joe Retaliation toys.  With the news from Paramount about the delay of the movie, Hasbro had to react.  Many retailers put Wave 1 out on the shelves for sale on May 25th.  It has been announced since that the future waves of G.I. Joe will wait until 2013 before they are shipped to stores.  What is in stock now is all that will be available for the next 9 months.

When I heard this news I made sure I bought everything I wanted from Wave 1 while I could.

A classic G.I. Joe figure comes on a card, with a blister or bubble package glued to it with the figure and accessories inside.  Back in the 80’s the card had artwork of the character on the front, and a filecard of that character on the back.  Over the years the basic package design has changed.  For G.I. Joe Retaliation the packaging is very basic with no front artwork and the filecards have been omited from the packaging.

Another feature that collectors really like for G.I. Joe are the display stands.  Since 2007, the 25th Anniversary of G.I. Joe, figures have been shipped with a display stand.  This is another bonus that has been omitted from the Retaliation figures.

The Retaliation figures are made a bit differently from the figures that have been released since 2007.  The plastic used is more pliable or flexible than other figures.  This is great for kids who are playing with the figures.  There is less chance of figures being damaged from use.  Many hardcore collectors are not happy with this material change because some figures don’t hold their weapons properly.  This change is also a benefit because the arms or legs can be manipulated easier for difficult poses, that wouldn’t have been possible using a more rigid plastic. 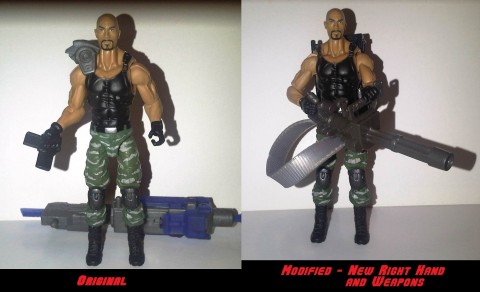 I really like the sculpts of several of the Retaliation figures.  The one I was looking forward to the most was Roadblock.  I wasn’t sure how Dwayne Johnson would look in G.I. Joe form.  Some of the proportions of the character’s body do look a bit weird.  It is a very tall action figure, so size of his limbs do look awkward.  The head sculpt is done really well.  I just wish The Rock’s tattoos were included on this figure.  But that would take extra effort, and if not done properly it would take away from the figure overall.

There are two items to note about the Roadblock figure.  The knee joint only has one point of articulation.  G.I. Joe collectors have been spoiled over the last couple of years by having 2 knee joints (Cobra Commander and Duke have 1 knee joint, G.I. Joe Trooper has 2).  The ankle joint is also missing from the figure as well (G.I. Joe Trooper and Storm Shadow do have the ankle joint).  These lost points of articulation make the leg more rigid, which allows the figure to stand well without a display stand.  This works for me because I am running out of display space, and I can get the figures packed in closer on my shelf without the stand.

The other negative with Roadblock is his right hand.  His hand comes moulded with a tab/post device which will activate special features on his spring-loaded weapon.  I hate the spring-loaded weapons and they live in a storage box in the closet.  The look of Roadblock’s hand takes away from the look of the figure.  But never fear.  The new G.I. Joe figures are easy to customize.  I quickly removed his hand to replace it with something that is more to my liking.

The new Retaliation figures are more durable for rugged play.  These are obviously not collector figures.  They were intended for the mass market.  The 30th Anniversary wave that was released before the Retaliation toys were made for hardcore G.I. Joe fans.  Those figures had lots of accessories, display stands and the much-loved G.I. Joe Filecard.

The Retaliation figures are great for what they are, a movie toy.  Some collectors will pick and choose what they buy, as for me I plan on buying almost every single figure and vehicle that will be released. 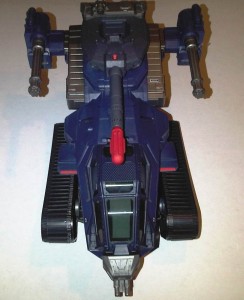 I avoided the motorcycles that were released.  The cycles were released with a figure moulded onto the vehicle.  I couldn’t justify the price for a toy.  It was an automatic pass for me.

The other vehicles I bought are basically re-issues of earlier vehicles.  The one I was excited for most was the Hiss Tank.

The Hiss Tank is the iconic vehicle for Cobra.  It was one of the first vehicles ever released for Cobra.  It has been retooled and re-issued many times.  The latest release is a recoloured and retooled version of the Pursuit of Cobra Hiss Tank.  It has been released 3 times previously in different colours.  The original was brown, then there was a variant black version (which was very hard to find), a crimson version and now the classic Cobra blue version.

The Retaliation version of the Hiss Tank has everything collectors have been wanting from the other Hiss Tanks.  It has a see-through canopy, which was omitted on the brown/black/crimson Hiss Tanks.  It also has a turret for a figure to ride on top of the tank.  The original Hiss Tank always had a turret and many fans are happy to see the turret return to the latest release.

Previously the tracks of the tank were movable, but now a rigid plastic track is used.  This change is great for kids and rugged play.  Plus with the extra pieces missing, the price of the vehicle can be lower.  It surprised me when I checked my receipt and I paid $21.99 for the Hiss Tank.  The previous versions originally sold for $29.99.  The changes really helped lower the price of the vehicles.

The Fang Boat and Ninja 4×4 are re-issues of the Water Moccasin and Awe Striker.  Those vehicles have been out for over 25 years now.  Many may remember those vehicles from when they were kids.  The design hasn’t changed much.  A few small items were added to change them a bit.  I have 3 Awe Strikers and 2 Water Mocassins already.  These vehicles were cheap, and I planned on buying them anyways.  They are a great addition to any Joe collection.  Especially someone who owned them in the 80’s and would like to re-live their youth with these recognizable toys.

The vehicles come with new figures.  There was a radical change for the vehicle drivers for the new toys.  A G.I. Joe vehicle driver was made (usually) with the same quality of a regular figure.  Sometimes the only change to quality was the paint used.  This time Hasbro redesigned the vehicle drivers with less articulation than the mainline figures.  Only their arms, legs and head will move.  No elbow or knee joints were added to these figures.

Many G.I. Joe fans are upset with this change.  I accept the change.  For my collection the drivers stay with the vehicle.  It is a shame to have a beautifully designed figure to be stuck behind the wheel of a jeep.  You never get to see them.  With the new figures being produced with reduced quality, I don’t feel bad hiding the figure from view inside a vehicle.  Plus this change makes the overall package affordable, which isn’t a bad thing. 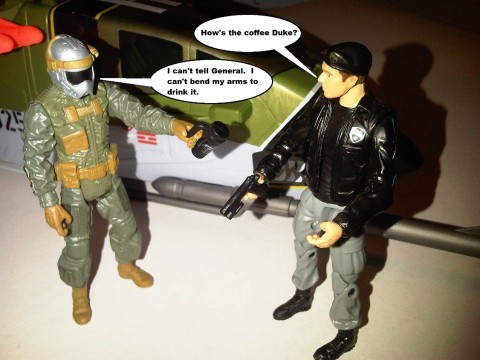 Now that we’ll have to wait 9 months until the movie (6 months for the figures), and no new figures being shipped until that time, these new Joes will disappear quickly.

If you plan on getting these Joes, take my advice, get them now.  I know I’ve given you the tip to take your time and wait for sales, but I don’t think you’ll have the selection if you wait.

The G.I. Joe Nation has been eagerly waiting for the new movie.  Now that we have to wait again, we’re going to buy up all the toys in a fervor.  So as they say get them “while supplies last”.

(Here’s just a small sample of what I have purchased so far for G.I. Joe Retaliation)