This weekend the highly anticipated Marvel blockbuster Guardians of the Galaxy hit theatres.  This is the movie we’ve been waiting for years to see.  Guardians is the one franchise you wouldn’t think would get the silver screen treatment yet, with other properties like Dr. Strange, Black Panther or Deadpool still waiting to get a movie.  We still haven’t seen a third Hulk movie yet, which we need to have since the producers have a formula and an actor who embodies the spirit of Bruce Banner and The Hulk.

But Guardians is here and Marvel was successful creating excitement for this movie that takes the Marvel Universe into the expanses of the Galactic Universe.

Every time there is a new release of a comic book movie, I help out Big B Comics in Barrie at our local theatre with a table.  We have a display set up helping promote the store, and we give away comics and prizes before each screening.  The last couple times Dee (Stephanie) and I dress up in cosplay and have fun with the crowds.  Seven days before the movie’s release we decided we would try to come up with a Guardian’s themed costume.  Time would be tight, but we scrambled to find the materials it would take to put it all together.

Dee decided to be Glenn Close’s character in the movie – Nova Prime.  I chose Starlord. At first I thought Starlord was going to be an easy character to portray.  The essential pieces for the look of the character is the jacket and the helmet.  With Halloween coming I thought I could pick up a Starlord helmet anywhere.  Quick and easy.  I was sadly mistaken.  Starlord helmets haven’t hit regular retail yet.  I found a mask, but it was too small for my head.  So the next step… hit the internet.

I found a very helpful tutorial on YouTube on how to make your own Starlord mask.  This tutorial gave me all the basics I’d need to make a mask.  I couldn’t find all the pieces that are used in the video, so I had to make due with what I had.  The base of the mask is an Iron Man mask, and they were easy to find.  A Dremel tool and hot glue gun were the most important tools I used on this build.  This was my first build of this type when it comes to cosplay.  I wasn’t sure what it would look like when I was done, but I am very happy with the results.

The most frustrating part of the assembly of this cosplay was the jacket.  I was looking for a leather trench coat.  I’ve seen them around before at second-hand and thrift stores.  But I didn’t have any luck in the 5 days I was working on this costume.  I found a trench coat that I liked and I tried dying it.  It is made of synthetic fiber and wouldn’t take the colour.  Instead I resorted to spray paint.  The jacket is stiff, but it will eventually soften up (and not lose too much colour… I hope). 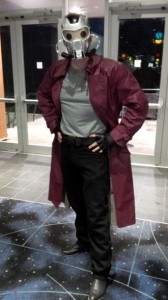 All in all I think my Starlord costume turned out well. It got some positive reactions at the theatre, and after I saw the movie it gave me some ideas on how to act like Chris Pratt’s Starlord.

Now for the movie…

Guardians of the Galaxy was a great movie.  I’ve heard some people say it is the best yet from Marvel.  I disagree, I still think Captain America Winter Soldier is the best Marvel has to offer, but Guardians is really good.  It is also one of those movies that is made for people who are not familiar with the comics, but there are lots of goodies hidden in there for hardcore comic fans.  (SPOILER… I was excited to see the Celestials, Cosmo the Space Dog, and Howard the Duck.)

The movie is filled with action and humour and does well tying the Novas, Kree and Thanos all together.  It also proves that anything is possible in the Marvel Cinematic Universe and the future looks bright for Marvel.

For more on Dee and my adventures in Cosplay, please like our “Simcoe County Avengers” Facebook page. 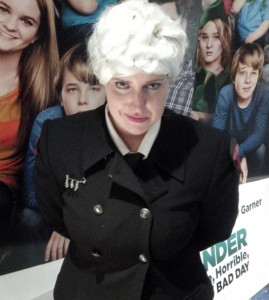 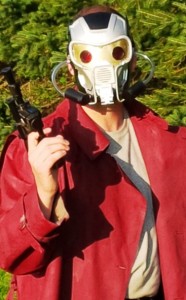 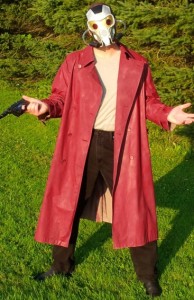 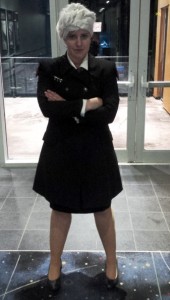 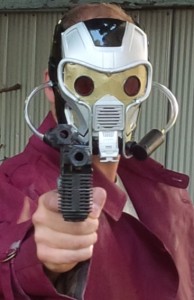