When I was a kid, Batman was my favourite.  But I couldn’t identify with him.  I was neither a millionaire… and both my parents were alive.  But there was one superhero I could identify with.  That was Superman.

Superheroes come from all walks of life.  There are millionaires and billionaires.  There are scientists, geniuses and really smart people.  There are soldiers, spies and former bad-asses who walk the thin line between right and wrong.  There are also angst filled teenagers, and people with emerging powers trying to find the balance between being a hero and a normal person.  But there is only one who I immediately think of who is a farmer… and that is Superman. 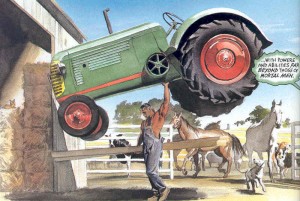 Some of you know that I grew up on a farm, and my family has been on the same farm for 183 years.  My day job is in the agriculture industry (I am the Parts Manager for a tractor company in Ontario) and 9 years ago we moved back to the farm and I am in the barn, or in the fields every chance I get.  Farming is in my blood, and hopefully my kids are interested in taking over the farm in the future.

That is why I could always identify with Superman.  Like him, I grew up on a farm too… and I was sent here from a doomed planet when I was a baby as well…

And like Superman, all of us farm kids have a dilemma when we grow older – do we stay at home on the farm, or do we go to the city to find our fame and fortune?

Ok… It’s not the same.  Superman had specific reasons for leaving the farm.  He had abilities and powers that we don’t.  But when you grow up on the farm you have to make a difficult decision.  It’s tough to make a living on a farm.

Costs keep going up and up.  Machinery and equipment gets more expensive to maintain.  The cost of fuel keeps going up too.  Feed for animals doesn’t come cheap either.  But the price farmers get for their crops and livestock don’t increase at the same rate as input costs.   And if bad weather hits, it can wipe out a complete crop.  Or if the unthinkable happens, like Bovine spongiform encephalopathy (aka Mad Cow Disease) it can be catastrophic to the agricultural industry and take years to recover.

This difficulty to make a good living is one of the reasons we decide to leave the farm. 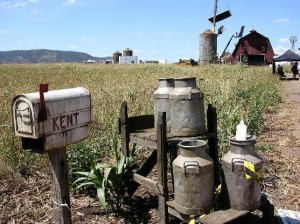 So where does Superman come into this?

There are lots of agencies that promote farming and other organizations that help support farmers who are having a tough time.  I think Superman would be a great symbol for the strength of the family farm and the education and promotion of the farming industry.  Or even being used in advertising promoting using local produce.  There are lots of different ways to tie Superman to the industry, it would just take the right group with a proposal that would interest DC into allowing his image to be licenced.

Agricultural a very important industry.  It affects everyone.  If you’ve ever eaten anything in your life, it came from a farm of some sort.  Farmers work very hard to make sure there is always food to be put on the table, and as the saying goes “If you ate today, thank a farmer.”