One of the best examples of Big John Buscema’s Conan is probably the one that has been seen by fewer fans than any other. 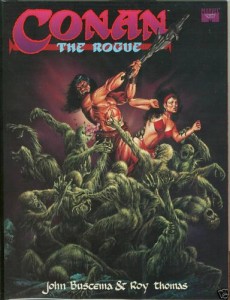 In 1991 Marvel released the graphic novel “Conan the Rogue” which was a story that was plotted, penciled, inked and coloured by Big John Buscema. He got his long time collaborator Roy Thomas to script the story, which he had plotted and oh what a job these two did on this book! It had a relatively low print run and was never really promoted from what I understand.

I never saw this book when it originally came out. It was published right around the time that I sold my entire collection and got away from comics for a good decade or so. This is one of the gems I discovered upon my return.When I discovered that Big John had passed away, and Jack Kirby was also gone, I began and still am trying to find all the issues these great artists had done in my absence. This was a joy to behold.

The story followed the typical formula for a Conan story: bars, broads and battles with the inevitable super natural element, but John had worked on and reworked many pages to this book. There are a few of the original art pages that were not used in the book that surface occasionally and I for one have not been able to scoop one up…yet, but my eyes are peeled for them! Apparently Big John put a few years into this beauty and it shows.

To say John had a way with Conan that brought this barbaric world to life is an understatement. Everything from the costumes, the horses and the supporting cast all fit together perfectly to transport you to another time and place. The cities themselves were dirty, dark, and almost delightfully wicked.

I always especially enjoy when he inks himself. I have attached a page of original artwork from Savage Sword of Conan #61 pg 16 which gives you an idea why I like him inking himself. He, in this page, evokes Hal Foster and Prince Valiant. If you get a chance pick up both of these books to see some really fine Buscema artwork! 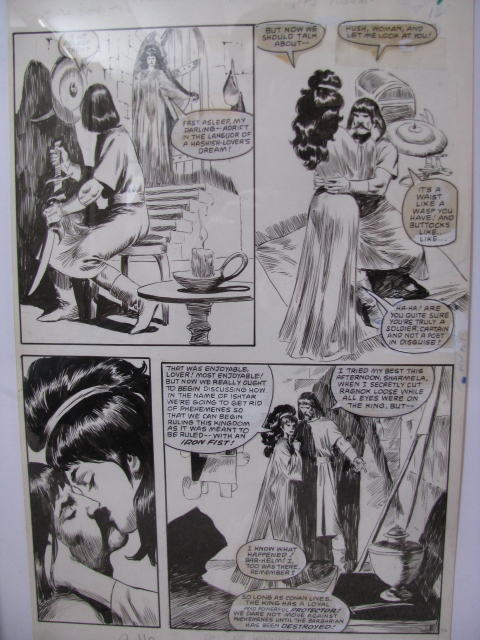 If you are a fan of Big John’s work you can see quite a few different pages that are mostly inked by him at my website www.comicdenn.com under original comic book art and My Personal Collection. The site is almost completed and if you enjoy original art as much as I do, I am sure you will find it interesting.

It is definitely worth checking out!