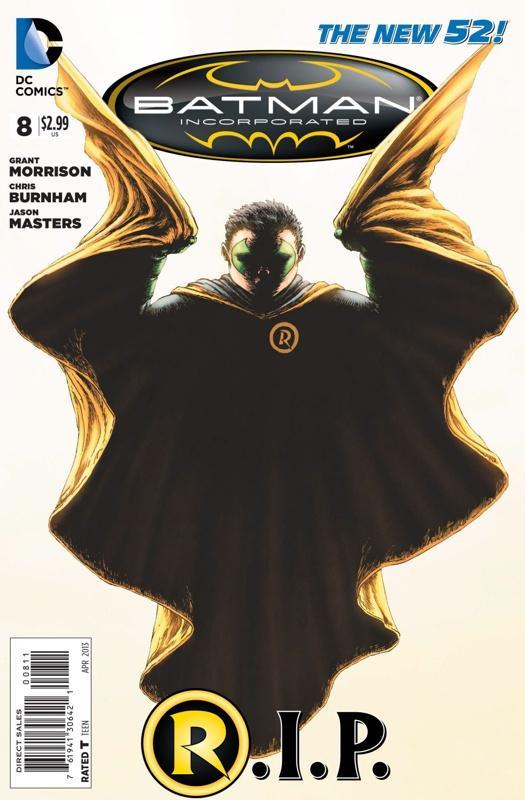 The comic book world was abuzz this week with the news that Damian Wayne, the fourth Robin, was going to die in the upcoming Batman Incorporated #8. I didn’t bother posting a spoiler alert because once something appears in the New York Post the cat is kind of out of the bag. What fascinates me is not that DC would decide to kill off a major character, but that the death of any comic book character rates as news at all. Arguably Robin is a very well-known character (even though it isn’t the Robin everyone knows) so I can understand the interest when a newspaper has the headline “Robin to die in Batman Comics” or something similar. But really, how can comic book web sites even be thinking that this is news anymore?

Death in comic books has become such an over-used plot device that it is now devoid of any meaning. Almost every major character has been “killed” at one point or another. While useful in that the character is removed from the public eye, the non-permanent nature of death in comic books happens with such laughable regularity that further strain is added to our suspension of disbelief.

I don’t even need to work hard to come up with a list of undead superheroes. Over the past two decades more characters that have died and come back to life than I can easily remember. Here’s off the top of my head:

Obviously death is used far too often for it to have an impact. Now I am okay conceptually with a reader not being too worried about characters dying. After all there are many aspects of stories which we as an audience take for granted. We don’t think Bond is going to die, for example. We know he is going to win so we are just trying to see how it happens. So as readers we can look at comic book deaths and not be too worried; we know the characters will come back. But the characters should be concerned. Sooner or later it is going to be hard for the characters themselves to care. When Thor dies for the umpteenth time won’t the rest of the Avengers just wait for a couple of months instead of cleaning out his room in the Mansion?

In our world it isn’t really believable that a man can fly, or shoot lasers out of his eyes, or grow to a 7 foot giant made up of gamma-irradiated muscle mass, but in the Marvel Universe these are regular, normal occurrences so we can believe them. The characters aren’t amazed that someone can fly so we don’t need to be and can use our suspension of disbelief to enjoy the action that drives the tale. But part of what makes a hero a hero is that death is a real possibility in their line of work. They have been granted powers beyond that of normal people and so risk their lives to use their gifts for good. A noble sentiment that is somewhat tarnished if a character knows that they’ll just come back in 8 months to help sales.

I’m being facetious of course. Only She-Hulk and Deadpool would know that they are comic book characters (I hope that joke plays to the crowd) but my original point stands: comic book deaths and the inevitable return happen so often that logically even the characters themselves would find it hard to care.

Recent buzz has also mentioned that Marvel is going to kill off Wolverine as part of the fall out from the Age of Ultron story. Really? Really Marvel? We are supposed to believe that you are going to kill off one of your most popular characters, and at a time when he has a movie coming out? The thought of this being a permanent change for Earth 616 is absurd and I can’t believe that any comic book fan would take it seriously.

So if we can’t take deaths seriously and they lose dramatic impact the draw has to be how the character dies and not simply that a death occurs. There needs to be a recognition that death is not a fixed state but rather one in constant flux. And comic book characters should not be too concerned with dying because they know that eventually they come back after being shot through time, or fighting through hell, or having a bath in a pit of rejuvenating goo. Death is full of possibilities.