Saturday had to be, by far, the busiest of all four days. I’m not the biggest fan of wall-to-wall people, so I was really happy to have been able to sit in on panels for most of the day.

I have to say I’m incredibly excited for Garth Ennis’ return to the Marvel Universe with his upcoming Nick Fury miniseries with Goran Parlov on art, which is an exploration of the Punisher Max Nick Fury and, presumably, will be outside of regular 616 continuity.

That being said, I have to say that they really sold me on the new Greg Rucka Punisher on-going in the 616 Universe; I was going to wait until the trade paperback was released (how I get most of my comics nowadays) but I think I might pick up the floppies instead.

Also, I have to admit that I really hope that Marvel can pull off their plan to ship out books on-time without sacrificing the quality; I’m so sick of waiting between issues.  Yet another reason why I’ve largely turned to trades instead of monthlies.

Oh, and I have to applaud the decision to make death actually count in the Ultimate Marvel Universe (the panel said that there were absolutely no plans to bring back Ultimate Peter Parker) and that the decisions creators make have real, universe-changing implications that can’t just be undone. 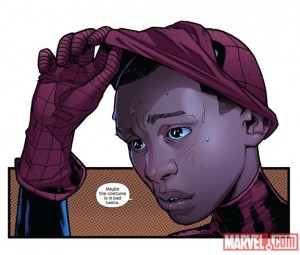 There was some discussion of the race wank that occurred when the new Ultimate Spider-Man, Miles Morales (who is half African American and half Hispanic) debuted. Glenn Beck’s incredible non-sequiturs (and who thought that Spider-Man: The Musical was “Best show I’ve ever seen!”) where I think he connected the young Mr. Morales with some nefarious liberal plot to “de-whiten” (TM-Not Glenn Beck) the US’ pop culture products. Somehow he managed to link this whole conspiracy back to Michelle Obama, who is apparently trying to rob all that white male privilege from Glenn Beck and his cronies (note: SARCASM!) by making superheroes non-white…and gay (I don’t know where that came from either, other than Beck saying that he doesn’t care about Miles Morales’ race or if he’s gay but that it’s totally a liberal media plot, guys! The following link above has a clip of Beck’s insane logic embedded within this article in case you want to head-desk until your ears bleed).

Since Glenn Beck is known for taking things horribly out of context and slapping the label of “socialism”, “communism” or “Nazism”, I went back and Googled the speech that Michelle Obama gave that he pulled the sound bite out of and I found it on YouTube. The relevant bit starts around the 2:00 minute mark, where Mrs. Obama speaks about changing the future, about making it a better place for the next generation and how this is going to happen by “mak[ing] sacrifices”, “chang[ing] our conversation”, “chang[ing] our traditions, our history” and that “we’re gonna have to move into a different place as a nation to provide the kind of future that we all want desperately for our children”.

Call me crazy but: (1.) how is this a bad thing and (2.) just how paranoid and delusional is Glenn Beck to read that this is some nefarious plot to rob the red-blooded American white man of his power by making the Ultimate Universe’s Spider-Man bi-racial? Wait, we’ve since this before with the uproar over Idris Elba as Heimdall in Thor – only this time it’s Michelle Obama’s fault and not Stan Lee’s.

Oops! Went off on a tangent there. (Sorry!) I have to hand it to the Marvel editorial team, who admitted that they knew that their decision to make Miles Morales multi-racial was an inherently political thing…and they did it anyway. As Marvel Editor-in-Chief, Axel Alonso said in interviews when this thing first unfolded, Marvel “wanted to make a statement about the 21st century” and “speak to [the US’] rich cultural heritage”. I’m glad it got people to talk about race in America and the power of having superheroes who are not white, heteronormative, able-bodied men. You always hear that representation (e.g., having characters in film, on TV, and in comic books that are reflective of the population) is a powerful thing. I think that this situation (not to mention the Boycott Thor debacle) demonstrates this point aptly.

I’ve mentioned it before and I’m gonna mention it again: I’m a Marvel Girl. Never really liked most DC stuff and will read it based on the person writing or the person drawing it. I did get a little excited for the new Wonder Woman series by Brian Azzarello, James Robinson’s Shade maxi-series, and the new Animal Man series by Jeff Lemire, in addition to my interests in the return of Barbara Gordon as Batgirl.

It was announced that, in addition to making Booster Gold the Canadian representative on the Justice League International team (announced Friday), that James Robinson and Nicola Scott are going to be relaunching Justice Society of America. To get around the exceptionally limiting 5-year rule, DC Comics has decided that the JSA series will take place on Earth-2. Hell, I don’t even know if the multi-verse even exists in the DCU at this point (well, it will once JSA launches).

There was a promise that Cassandra Cain and Stephanie Brown are still in the DCU, even if there is only one Batgirl, which makes me a little excited about that they’re still keeping the good bits. There was also a mention of a sequel Superman: Earth One (by J. Michael Straczynski) but that Clark Kent’s a little dorky and that he’s gonna be a sweater wearing kind of guy (and that they hope that the ladies are okay with that). In addition, one of the panellists (I think it was DiDio based off of the voice, but I was busy typing away at my notes so I can’t be 100%) that two-thirds of the artists on this sequel are “girls” (poking the bear named “taking issue with the fact that DC comics creator pool has gone from 12% women to 1%”).

Now, I use the term “fan girl” and “Marvel girl” and maybe this is just “agenda o’clock” but the use of “girls” to describe some really talented female artists working on this book? Pissed me off as it sounded like whoever was speaking was infantalizing these women. It might be possible that I’m looking for something to pick at, something to grasp onto. But it really rubbed me the wrong way. I’m going to continue to think on this and get back to you when I can form something more coherent than a string of curse words.

As with the DC Panel, Marvel took this opportunity to discuss some upcoming books including Destroy! (February 2012), which was described as a superhero team comprised of Marvel’s monsters and their subsequent adventures “punching each other in the face”. It’s got Devil Dinosaur, Thing, and She-Hulk. I’ll definitely be reading this!

The other big news is that while the Alpha Flight limited series is over, the ongoing will be launched. I love Alpha Flight and whole heartedly agree with Axel Alonso’s proposed marketing strategy: “If you don’t buy Alpha Flight then you don’t love Canada.”

There was a lot of talk in all three panels about the future of comics and making the medium more attractive to new readers. I’ve purposely not commented on this as it kind of overlaps with a future column.

Shelley Smarz is a comic book scholar, pop culture maven, and business lady. She still has a massive hate-on for anything Microsoft, most especially Word 2007 and Windows 7 and has wished (half-heartedly since she still needs it) for her netbook to just die in a fire. Not only is she annoyed by the fact that every bloody time she starts up Word her OS has to “configure” the worthless thing but also that she’s lost a couple articles to the black woods of digital oblivion where he wee microchip wolves have torn the documents limb from limb. She’s developed an eye twitch and a really bad habit of going stabity-stabity when things don’t go her way. And people wonder why she’s a Mac Book Pro girl.