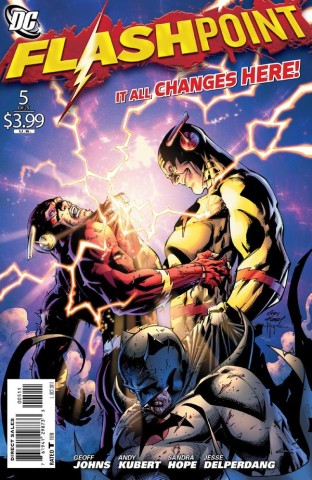 Last week the final issue of Flashpoint was released, and with it, the DCU as we knew it came to an end. The series has paved the way for the New 52, but how smooth was the transition exactly? This week we’re taking a look at the book that kicked off the new DC status quo.

In a flash, everything changed in Barry Allen’s life. Now trying to piece together the mystery of a new timeline, Allen is in a race against the clock and must set everything right before the world he knew disappears forever.

Finally face-to-face on the battlefield, Thawne and Barry engage in a shouting match and fist fight until Thawne gains the upper hand and forces Flash to discover the truth of the situation: Barry is responsible for the timeline shift because he went back in time and, consumed by grief, saved his mother. In doing so, he caused severe damage to the timestream. Because he was running through time as Barry shattered the timelines, Reverse-Flash explains he no longer needs Barry alive to birth the speedforce, as Thawne has become a living paradox, free from the shackles of history. With Barry beaten to a pulp and laying at the feet of Thawne, Thomas Wayne impales him at the height of his gloating. With Reverse-Flash dead, Thomas and Barry turn their attentions back towards the battle at hand.

With Enchantress firmly on Wonder Woman’s side, she blasts everything in sight, eventually targeting Barry who is saved at the last moment by Thomas. Superman arrives soon after to help halt the war, long enough to divert everyone’s attention away from Flash and Batman. Thomas Wayne hands him a note which he asks to be delivered to Bruce. Flash takes off as Thomas dies, running as fast as he can before being pulled to his mother’s home. There she tells him it’s okay and that her life doesn’t equal the millions lost during the war. She tells him she will be okay, and he continues on to stop himself from changing history. As he does, a mysterious being informs him that the timelines were shattered into three parts long ago and that Barry can help restore it. In a flash, Allen wakes up in his police precinct and quickly runs off to the Bat Cave to find Bruce. He delivers the note from his father, leaving Bruce light-headed as the reality of the note’s weight barrels down on him. A teary eyed Bruce thanks Barry as the credits roll on the DCU.

It’s difficult to view Flashpoint as anything other than a great disappointment. Considering the hype surrounding the title leading into the company wide re-launch and who the writer is, the story felt very thin and loosely devised, while the reader is forced to digest too many plot-points simultaneously. The storytelling is lazy as a result and glosses over plot devices that would have been better served to have been told over another issue, rather than Johns’ rushed storytelling in the final part of the series, which was preceded by four issues of slow-building plot. The story is poorly paced and is more reminiscent of Johns’ work on Brightest Day than it is Green Lantern, JSA, or his Flash series starring Wally West. I expected more from this issue and Johns, however I can’t help but feel the series failed amid four previous issues which were at least attention grabbing combined with a hint of mystery. In contrast, issue five threw too much at the reader and floundered as a result.

Kubert again provided some of the most detailed art on the stands, drawing some fantastic scenes in the issue between Flash and Reverse-Flash, Barry’s running through time and most importantly the final pages of the issue as Bruce and Barry read Thomas Wayne’s letter, causing the Dark Knight to cry very openly. Kubert’s work on this title easily rests among the best in the industry. He did a fantastic job of displaying the emotion of the characters, such as very early in the issue where Barry glances up at Thawne with his big blue eyes, worry and fright enveloping his mind. Another example of this emotional element in the story we find in the pages of his encounter with his mother; a similar look and tearful embrace tugs at the heart-strings when Barry meets with his mother for the last time. This is the crux of the series’ art, one which solidly and proficiently communicates the level of emotion attached to the unraveling of Barry Allen’s life. This has been a hallmark of the mini-series and one that, considering art is half the medium, has brought this book up a bit in overall presentation. This issue is home to some amazing works of art, which Sinclair coloured remarkably to bring the excellence of Kubert’s work to the forefront.

Flashpoint was a disappointment. From the time the new DC 52 was announced earlier this year, it became painstakingly apparent how this story was going to end, a point driven home once the first issue was released. It was too obvious, knowing how time travel fundamentally works, that Flashpoint would be the giant red reset button for the DCU. That prediction turned out to be the case. Although the mystery of Reverse-Flash and what he did to alter the timeline was the running element in the first four issues, the abrupt and unforeseen revelation that it was Barry who caused the alterations to the timestream were a surprise. Yet, like Brightest Day, it was poorly executed. The larger plot points didn’t feel like they happened organically, and upon the Barry revelation, the rest of the book sprints to the finish, stopping only to cement the relationship between Bruce Wayne and Barry Allen. I feel like the greater outcome’s predictability took away from the story and what it was to mean for the greater DCU. Although the first four issues were better, the final issue reeks of a hasty editorial decision. Perhaps the series should have been given an extra issue, because Flashpoint sped us to a hasty, forced and obvious conclusion which detracted from the entire reading experience. The final issue reminds me of a caffeinated child speaking too quickly to understand, only becoming intelligible at the end of their last sentence.