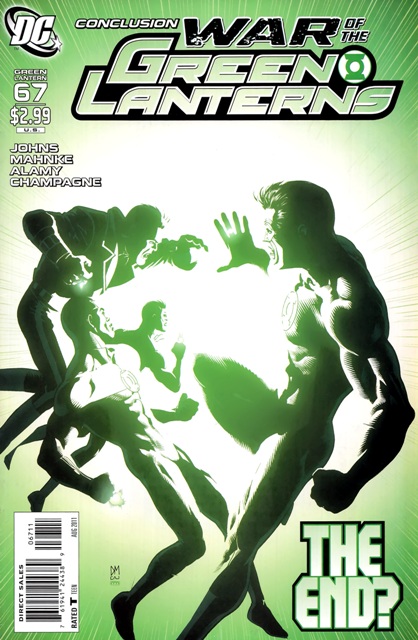 Green Lantern #67 arrived in stores last week, and with its arrival, the War of the Green Lanterns epic also concluded. Did the finale deliver? Forward!

It all began when Parallax was transported from the battlefield to an undisclosed location. As time passed, a former Guardian of the Universe collected the rest of the entities of the emotional spectrum. If that wasn’t enough, not long after fighting against falsely recruited Green Lanterns, Parallax is placed back into the Green Lantern power battery, forcing most of the Corps to experience fear for the first time. After returning to OA, Kyle, Guy, John and Hal are joined by Ganthet as they try to defeat Krona and his entity-possessed group of Guardians. The war rages on! 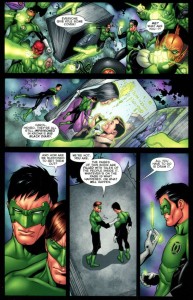 Freshly freed from the influence of Parallax, the entire Green Lantern Corps flies head-on into the Guardians, each having been possessed by a different entity of the emotional spectrum. Finding their efforts futile, Hal urges Kyle to write the future using the Book of the Black in order to free Carol, Sinestro and the other Corps leaders from the “Black Book.” Once freed, their former rings lock onto them, but their programming is disrupted by Krona, causing the rings to fly to him instead. Now wearing a ring from each Corps, Krona attacks Ganthet and puts him out of commission. He quickly turns his attentions to Hal Jordan, whom he ensnares in multi-coloured snake constructs. With Hal on the brink of defeat, Krona questions Jordan’s allegiance to the Guardians, to which he responds he fights for the ideals the Corps emodies, not the Guardians themselves. Sinestro looks on, and as Krona is about to deliver a final blow Sinestro fearlessly leaps into action and clobbers Krona with a large metal rod. After brief success in subduing Krona, Sinestro too falls victim to Krona’s power. Yet in acting, he is chosen by a green ring and is re-inducted into the Green Lantern Corps. Jordan and Sinestro team up and attack Krona, puncturing his defense shield and killing him with a blast through the chest. In the aftermath, the emotional entities are released from the Guardians and all of the Corps’ leaders except Sinestro receive their rings back. Jordan tries to get Sinestro to take his green ring off, to which the Guardians interject, stating they’ll deal with Sinestro. Instead, they discharge Jordan for killing a Guardian and send him back to earth. 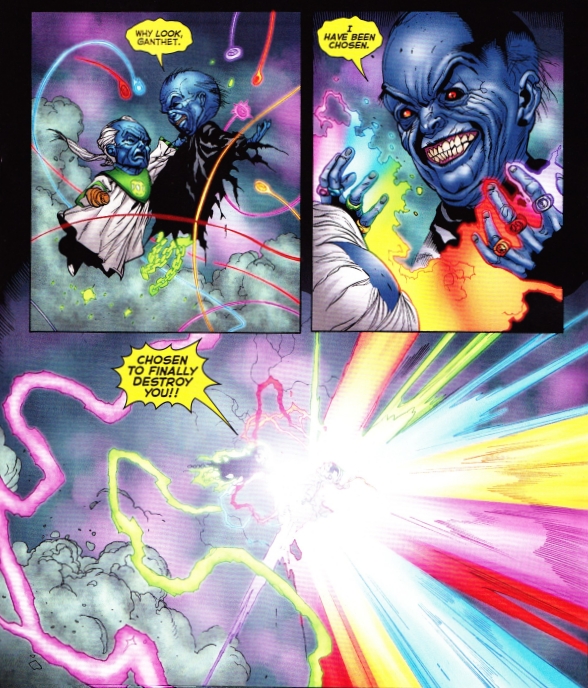 Mahnke’s pencils in the issue are fantastic. There isn’t a page in the issue that doesn’t shine among his brightest works, ranging from the initial two-page spread of the Green Lantern Corps opposite the infected Guardians to the final pages featuring Hal Jordan on earth without his ring and Sinestro once again in the familiar green and black garb. Every page booms with fantastic pencil work, brought to life further by Eltaeb and Mayor’s colour palettes, evident especially in the pages requiring mastery of the different lights and weaving them around the other to create a wonderful, rainbow like presentation. The best pages were easily those involving Sinestro towards the end of the issue, allowing us to follow him through the paces of overcoming his fears, helping Jordan and again donning the Green Lantern uniform. The artwork in Green Lantern #67 is just fantastic. 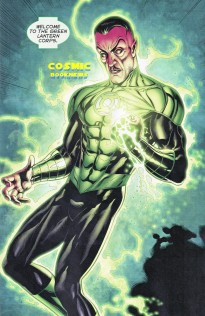 I feel like the issue offered a very climatic ending to the War of the Green Lanterns story arc, giving the Green Lantern Corps an opportunity to band together and take down Krona after having everything they know and hold dear laid siege to. The issue, as well as the entire story arc, kept the action moving and provided quite the pay off in both Krona’s defeat while also bringing Sinestro back into the Corps’ fold as a Green Lantern. The plot devices hardly felt forced, although Kyle’s role in freeing the other Lanterns from Drak’s book felt cheesy. It’s unclear what the future holds for Jordan with his expulsion from the Corps, but the story arc affirmed his place in the Green Lantern lore, in addition to the status-quo smugness of the Guardians and an interesting new direction moving forward; complemented by a potential future plot point. Green Lantern #67 was a great issue to conclude both the volume and crossover event spanning the first half of the year. It delivered on its promise that the Corps will never be the same again.